Residential Development came to Parkside as the area became easier to access. Main Street was paved in the 1830s, but it wasn’t until the extension of street car service from Cold Spring to the Park in 1879, and the completion of the New York Central Beltline Railway in 1883 that living in Parkside was really made a viable option for many.

Before those tracks were laid, the only two options for getting to the area were walking or taking a carriage. The Beltline tracks made a 15 mile loop around the city, and Buffalonians could ride from one end of the city to the other in about forty-five minutes, costing only a nickel.

The train stopped twice in Parkside: The Highland Station was at Greenfield (near Jewett) and Main, and the Bennett Station at Amherst Street and Starin Avenue, where the station house and watchman’s tower remain as private residences.

Elam Jewett and Washington Russell III sold portions of their property to the city in 1870 for Delaware Park, adding to the Granger acreage already set aside for the park. Russell, the grandson of the man who settled along Main Street in 1826, built himself one of the first homes of the “Parkside” era on Main Street, in the shadow of his family homestead in 1885. Russell the Third was a lawyer, minister, mathematician, and musician who squandered much of his family’s fortune on living the good life of a gentleman. 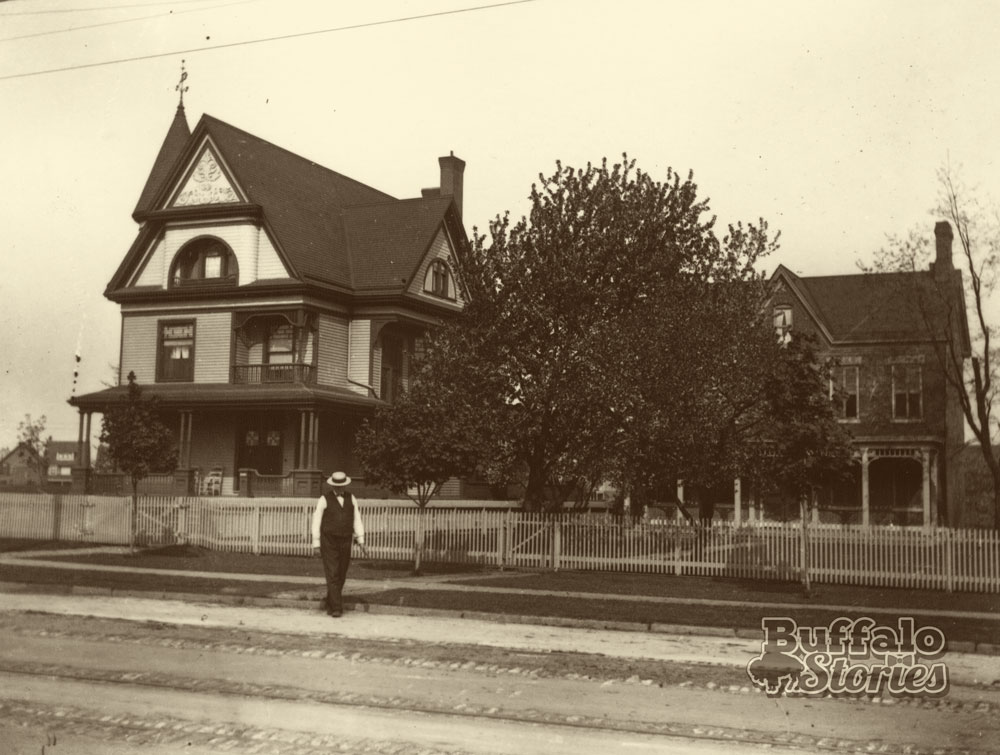 He built a Victorian showcase (above), replete with the genteel finery of the era: A well stocked library, a music room, and a scientific laboratory. Russell III died in 1944, but his sister Lillian stayed on in the family homestead (below) until the late 1960s. According to provisions in the family will, the 1841 brick home of Washington Russell was to be razed. Though the building had fallen into utter disrepair, after years of wrangling, the area’s oldest home was saved, having served, as previously mentioned, as funeral parlor, and now a church. The Victorian home built by Russell III also survives on Main Street immediately to the south of the homestead. 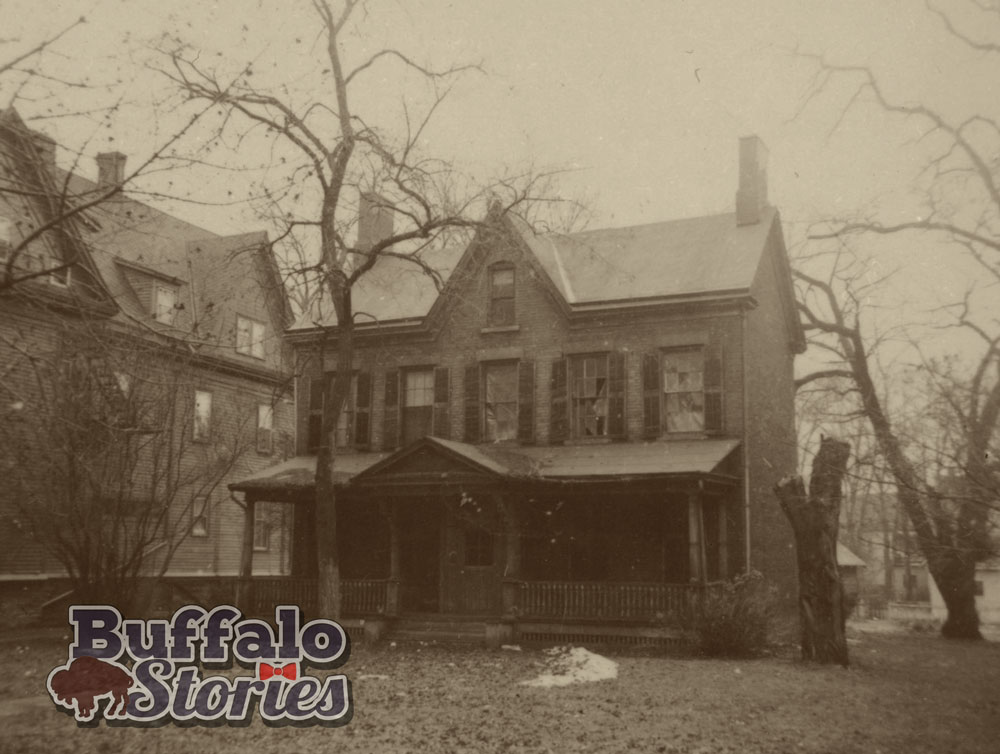 Another early “Parkside” home belonged to the nephew (cousin by some accounts) of Elam Jewett, William Phelps Northrup.  In 1870, he built a grand Victorian home on the southwest corner of Crescent Avenue and Jewett Parkway. The home adjoined the Jewett Family Willowlawn Estate just to the east.

While having an Uncle as one of the city’s most successful printers couldn’t hurt, Northrup became a success in his own right as a publisher of maps.  His home was torn down in the 1950s, to make way for a Latter Day Saints Church (which still stands today as the Girl Scout Head-quarters.) Northrup’s barns, however, still stand — today a private home– set back from the street, immediately south of the Girl Scouts building on Crescent Avenue.

Even after handing over massive acreage to the city for the park, both Russell and Jewett still had large tracts of land between the Park and Main Street, land that was included in Olmsted’s plans as “the Parkside.” The initial plan for Parkside was bounded by Main Street, Parkside Avenue, The Belt Line Railway, Colvin Avenue, and Humboldt Parkway to the south. Olmsted’s original vision called for Parkside as the ideal suburb: The curvilinear, crescent-like street patterns and lots as large as 100×100. If Olmsted had his way, the entire neighborhood would have looked much the way Jewett Parkway does today; large homes on large lots.

The problem was, in the beginning, people just weren’t buying. The Parkside Land Improvement Company was formed in 1885, but development was initially slow. Olmsted was actually hired back by developers; retained to redesign the street layouts to allow for smaller lots, with Jewett Parkway remaining as the anchor and ideal showplace for the neighborhood. For the streets radiating from Jewett, the same basic design and intent was left intact, with curving streets and buildings set back, but less green space around each building because of the smaller plots.

Parkside Avenue, Crescent Avenue, and Greenfield Street were graded and surveyed with the smaller lots in mind in 1888, Woodward Avenue (originally Davis after an early Parkside Land Improvement Company investor) and Summit Avenue the next year.  An 1892 ad from the Buffalo Express encouraged Buffalonians to come to Parkside:

Of all those amenities, the fact that electric streetcars made their way to a still largely undeveloped neighborhood was likely most important. In a pre-automobile society, it was a major milestone in the further development of the neighborhood. 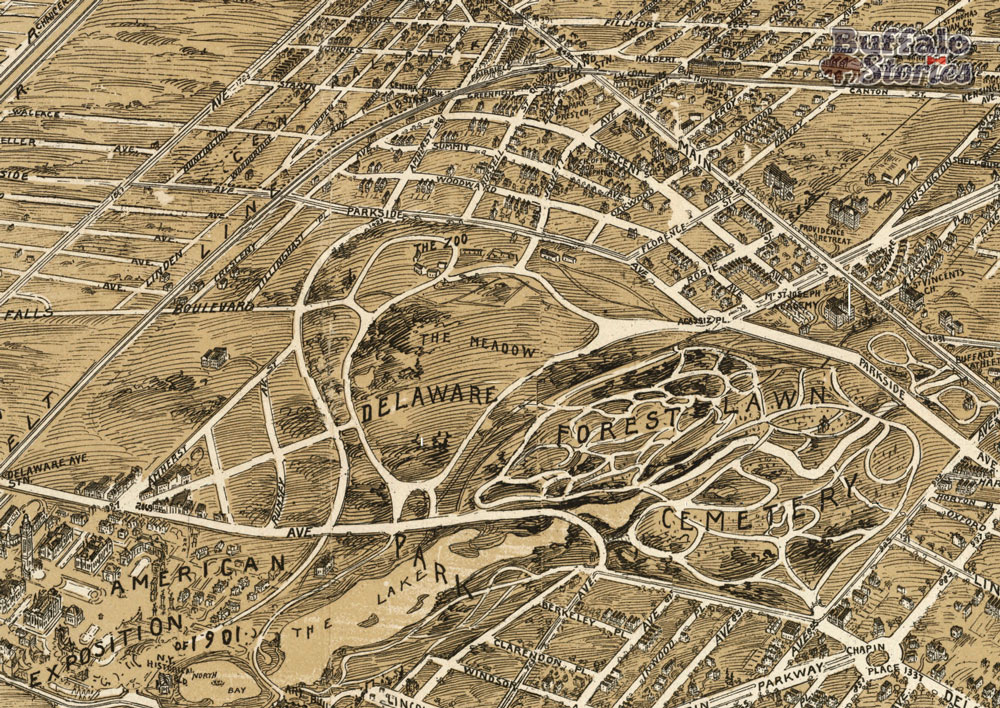 Can you spot the error?  In 1893, a bill made it to the State Assembly with aim of extending Parkside at Agassiz Circle, straight through where Medaille College now stands, through the cemetery, straight through to Delavan Ave. That was rejected on the grounds that cemetery had already sold some plots in that right away, and the cost to the Buffalo Cemetery Ass’n would be too great. The makers of this 1902 map mistakenly showed Parkside running to Delavan.