“I’m cleaning out my friends list. If you’re reading this, congratulations, you made the cut!”I’ve cringed every one of the hundreds of times I’ve seen this or similar messages on Facebook.

Walter Cronkite once bawled out Stuttering John for using the word “friggin'” when asking him a question in one of those set-up interviews he used to do for the Howard Stern Show.

“Frigging, now what does that mean,” bellowed Uncle Walter condescendingly.

“But what does it mean?,” drilled Cronkite. “A word should have meaning, shouldn’t it?”

That’s the long way of saying “Defriending” someone means something. You’ve said something there, whether you like it or not. You know that. You’ve been defriended, or “unfriended” as Facebook puts it. If you weren’t hurt, you were at least indignant. “Well, I never liked that sonava– anyway,” you might say. Even if that’s true, you don’t want someone putting up that “Add as Friend” hand in your face without provocation, or at least not knowing why.

Defriending someone, however, is like ripping their address out of the little book you keep in drawer by your phone, and, when they send you a Christmas card, you scrawl an Elvis style “Return to Sender” across the the pretty red envelope. 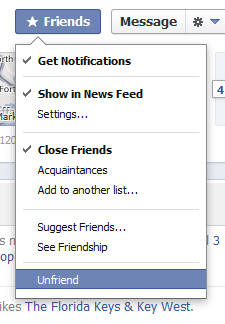 We wouldn’t have ever thought to do that in olden times, but we’re generally less considerate these days.

People make all sorts of excuses for why they defriend people they know, but they are just that– excuses. Just like most things in life, if you need an excuse… Deep down, you know it’s not wholly right.

To me, finding I’ve been defriended almost always comes with some bit of sadness. I don’t do a lot of “stalking” on Facebook, so I usually find out when I try to send someone a note. Usually a congratulatory note, or a “hey, thought of you–” note, or maybe I found an old photo or piece of audio I know they’d like.

So it’s not just “you defriended me,” but “here I am looking to rekindle an old friendship, which you found worthless.”

I had worked on a few assignments with one young lady a few years ago. Didn’t really know her well, but we hung out with each other and helped each other quite a bit on a project. We got along well, and were Facebook friends. I recently saw some of her work in the national spotlight, and was going to write her a note, but— yep.

In this case, I was more perplexed because she doesn’t get it. Nor do the braggart defrienders. To me, that sort of relationship is what social media is about. Contact with people I will likely never go to lunch with, never see, never call.

Life is about relationships. So much happens when you are willing to explore those relationships, or at least not cut them off. Today’s superficial Facebook friend could be tomorrow’s next job referral. Or he could be the guy who says, “oh yeah, I knew him.. Jerk defriended me on Facebook.”

Selfishly, if not for the greater good, is it really worth pissing someone off or hurting their feelings for no reason other than you’re clearing deadwood? Your Facebook account isn’t a forest. Deadwood doesn’t increase the risk of fire.

Have I thought about this too much? Probably. Have I defriended people? You can count the number on one hand, in 6 years. A few were people who came to my page to agitate. Only one I knew personally.

I always say, “if I offend… Defriend.” But in this self-centered, consequences be damned culture we live in, I hope you think about it for a moment before you do. And I hope you don’t try to be all friendly with me in the grocery store, and act like you didn’t open my photo and click defriend.