BUFFALO, NY – This one will be a little different on Friday.

Audiences at the “Giants of Buffalo” series at the Buffalo History Museum have been treated to spectacular trips down memory lane.

Danny Neaverth, Sandy Beach, Stan Roberts, Shane Brother Shane, and Joey Reynolds gave a glimpse of what it was like inside what was “the most happening spot” in Western New York 50 years ago– WKBW Radio.

Irv Weinstein, Rick Azar, and Tom Jolls shared their unlikely formula for success in television news, what it meant for them personally, and how it almost certainly couldn’t happen the same way now.

This Friday, when he and Lou Michel take to the stage, Dan Herbeck wants people to understand that when he’s talking about working hard at chasing good stories– and telling those stories in meaningful and relevant ways– he isn’t talking about some bygone “glory days” era of journalism.

“Professional journalists are still needed,” says Herbeck. Maybe now more than ever. What passes for “news” in many circles in 2014 is actually blogging and talking about news that was unearthed through the grind-it-out determination of a journalist–probably a print journalist– somewhere else along the way.

Because readers don’t have to buy a physical newspaper anymore, Herbeck is concerned that people don’t value the work that goes into putting a story a few clicks away. “People have the false impression that ‘it’s easy to get news,” says the 36 year Buffalo News veteran. “It’s not easy to get news. There are people at the front end (of those clicks), people who work hard to get a story.”

Herbeck says he learned and expanded his story-telling skills as he watched and worked with dozens of other story tellers. He wrote a book with Michel, but the veteran scribe says he spent even more time working side-by-side with longtime News reporter Mike Beebe. “It got to a point where we could read each others’ thoughts,” says Herbeck of Beebe, who retired in 2010 after three decades with the Buffalo News.

It’s Beebe and other dogged newspaper men like Gene Warner and Lee Coppola who Herbeck will have on his mind as he is honored as a “giant” in journalism. “They’ve scrambled and scratched and stumbled their way to good stories over the years. I take it as a real honor that they picked us to do this,” says the semi-retired journalist, taking a break from the weeks-long pursuit of another story. “I feel like we’re representing the hundreds and hundreds of newspaper reporters over the last 200 years here in Buffalo.”

Along with Lou Michel, Dan Herbeck says he stands honored and ready to represent “the likes of Mark Twain and beyond.” 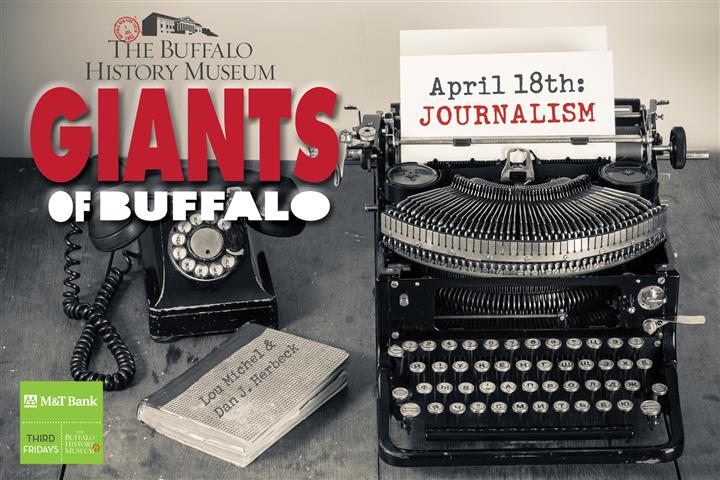