This is my ol’man’s high school senior portrait— it’s the only photo of him that I ever remember him liking. 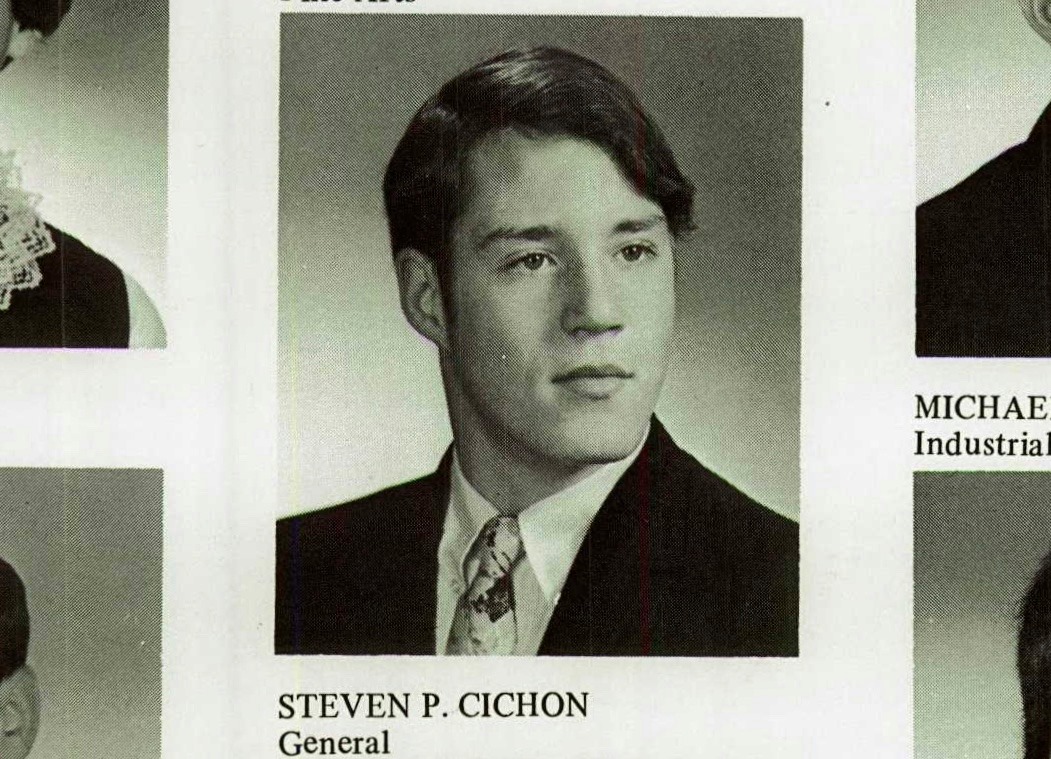 In a long gone, old tenement-looking building behind City Hall, Steven Patrick Cichon was delivered in a 4th floor apartment kitchen during a raging snow storm.

This was the fifth of eleven babies for Grandma Cichon. She put her newborn preemie in the oven to keep him warm until an ambulance could take him the few blocks up Niagara Street to Columbus Hospital.

Nurses quickly christened him right on the spot, not expecting the little oven-warmed baby to make it, but the fight was the first of many he’d win.

Although that first birthday was a rough one, Dad loved his birthday. It was his favorite day of the year.

Sometime around mid-September, he’d start reminding us that his birthday was coming up, and that he’d want a BIG PRESENT… the words said with his arms outstretched and his eyes opened wide.

By November, he’d be getting into specifics. Occasionally, he actually needed something, which was great. Otherwise, we’d have to come up with something on our own.

Despite what you might think about someone in your life, rest assured, that my father was indeed, the hardest person ever for whom to buy a present.

The ol’man spent the last decade or so of his life barely ambulatory. He was a diabetic, and went through several unsuccessful surgeries to save his foot; the there were several surgeries to remove his leg right below the knee.

He was greatly weakened by all the surgeries, and laying in hospital beds, and never really got the hang of the prosthetic leg that he only rarely even tried on.

He would have disagreed, but he was wheelchair-bound.

Dad wasn’t a heavy drinker, but he did like the occasional, or slightly-more than occasional whiskey.

It was never straight— he’d mix it with just about anything. Iced tea, Diet 7-up, Diet Ginger Ale. His tastes changed often, but I think Ginger Ale was his favorite.

Even though he’d eat three doughnuts with impunity, he always drank diet pop because of his diabetes.

Ten years ago, at his last birthday dinner at his favorite Danny’s in Orchard Park, he tried to order a whiskey and diet ginger ale, but alas, like any other bar/restaurant in America, they didn’t have diet ginger ale.

He ordered something else, and when the waitress went away, he whispered to us, talking out of the side of his mouth, “No diet ginger ale? In a fancy place like this?!?”

The stuff he’d come up with, being a veritable shut in, is the stuff we remember him by.

Buying dad a bottle was great. He’d take a quick peek and put it right back in the bag… or maybe roll right down to his office and put it in the drawer so my mom wouldn’t know. (Yeah, right.)

Father’s Day, birthday, Christmas. Dad knew what was coming from me, and part of the gift was giving him reason to devise some sort of ruse to make sure my mother “didn’t know” he’d just gotten some booze.

As he was executing said ruse, he’d quietly, but with the tone implying yelling, ask me why the hell I didn’t get him the big bottle.

Just like with most dads, my ol’man took more than his share of good-natured jibes from the family all year.

But none on his birthday. He loved that— it might have been his favorite part of the day.

He loved even more when someone would let one slip, and he was able to remind, “Not on my birthday!”

Though the polka classic reminds that in heaven there is no beer— on December 10, I know there’s cheap, crappy, blended whiskey in heaven.

And Dad’s drinking it by the gallon with plenty of diet ginger ale.

They must have it in a fancy place like heaven.