There was no battle there, though the men were in Buffalo in defense of our nation’s borders. The soldiers, mostly from southern states like Maryland and Virginia, died as they wintered on the large open area that would become “the park meadow” and the golf course.

These soldiers came to Western New York to defend our nation wearing light summer uniforms and open ended tents. They took on the worst of Buffalo winter with few blankets, fewer boots, and very little food. Most of the food that did make it this far out to the American frontier was rancid.

“Camp Disease,” probably cholera or dysentery or a combination of both fueled by starvation and frost bite, killed this men in an unimaginable way.

The ground was frozen, so the dead were buried in either shallow graves or simply piled in tents. When spring came, a large hole was dug… the dead buried in a mass grave.

Buffalo’s Tomb of the Unknowns.

If you don’t know about this, you’re not alone. Through the years, many attempts have been made to call attention to this sacred site— the very reason for Memorial Day. 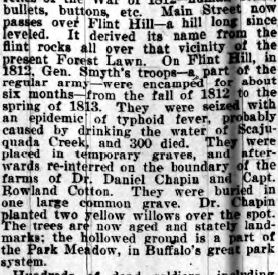 If this were a Civil War mass grave from 50 years later, Delaware Park would be a National Park and it’s story known around the world. The War of 1812 isn’t as sexy historically speaking, so these men lie mostly forgotten. 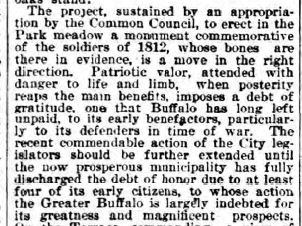 A large boulder, placed in 1896, marks the spot of the grave. The fact that its in the middle of the golf course means, again, it’s forgotten.

It was hoped the monument could be dedicated on Remembrance Day in 1896, but it wasn’t ready– and was dedicated on July 4, 1896 instead. 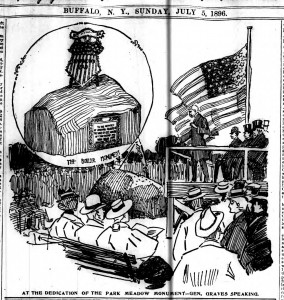 Sadly, through the years, the site– and therefore the memory of the sacrifice it represents– has been stripped of more attention raising features. 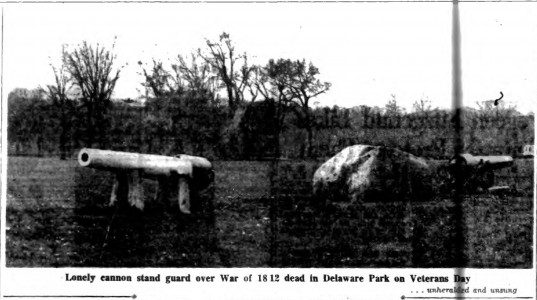 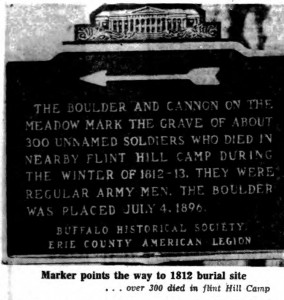 A flagpole disappeared in the first half of the 20th century.

This 1955 article from the Courier-Express shows a pair of Civil War parrott rifles on either side of the stone marker and a historical marker pointing to the site from Ring Road. The cannon disappeared in the 80s, the marker some time before then. 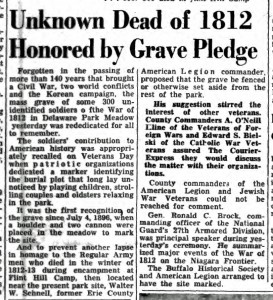 More needs to be done to honor the sacrifice of these men who gave their lives and now are spending eternity in the midst of our city.

Can the historical marker be replaced? Can we as a community build awareness and try to bring more honor to this many times over forgotten sacred site?

Read more about the history of The Mound in the Meadow and our 2011 commemoration at the site: http://www.staffannouncer.com/meadow.htm