While most of the earliest development inside what we know now as Parkside was an effort of mostly wealthy Protestant men, the Main Street corridor leading into the neighborhood was developed in large measure by the Roman Catholic Church.

St. Vincent de Paul church was built in 1864 on Main Street just south of what is now the Kensington Expressway interchange. St Vincent’s Roman Catholic Church was founded by the Rev. Joseph Sorg to serve the German-speaking Catholics who lived in the area. Generations of southern Parksiders attended mass at the church just south of Humboldt Parkway on Main Street until the parish closed in 1993. When St. Mark’s parish was established in 1908, the boundary line was drawn between the two parishes at Jewett Parkway, but was later moved south the West Oakwood Place. 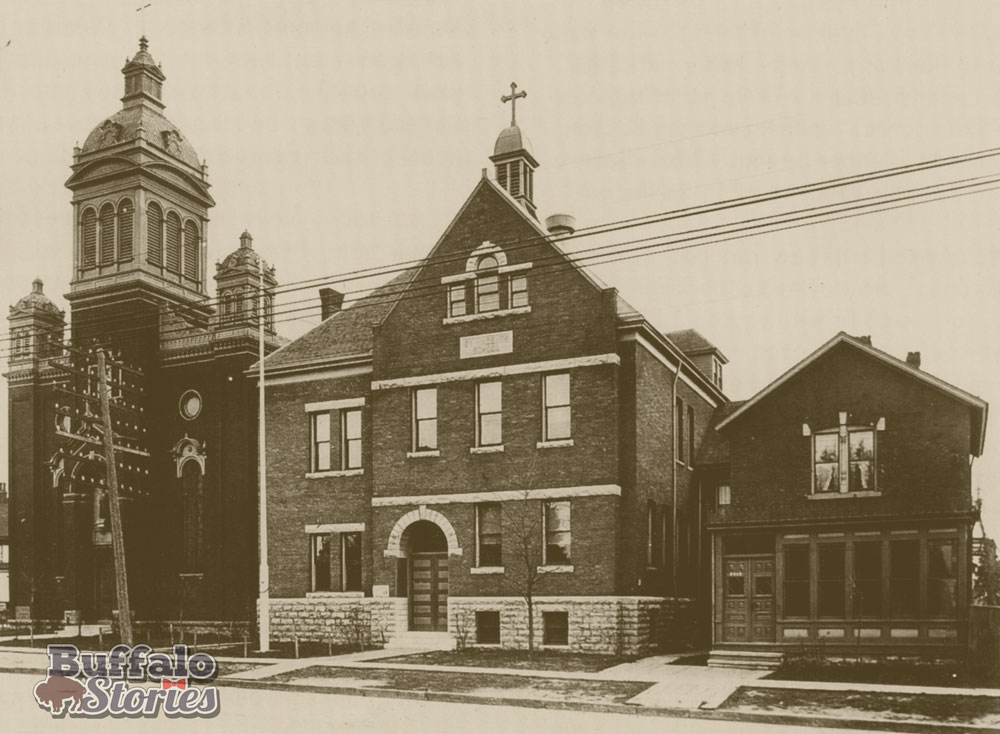 The church grew fast enough that 3 different buildings, all on the same block, served as St. Vincent de Paul Church, each building growing larger. The most recent church buildings, built in 1924 in the Byzantine Romanesque style (see photo next page), are now a part of the Canisius College campus, and the church itself is known as the Montante Center. Many affluent Parksiders gave heartily to have the building erected.

One of the Parkside area’s earliest enthusiasts was Mother Mary Anne Burke of the Catholic Sisters of St. Joseph. Mother Mary Anne and her sisters marveled as they strolled up Main Street “north of the horse-drawn trolley tracks.”

The Sisters of St. Joseph built a convent for novices, a novitiate, south from St. Vincent’s to Delevan Avenue. The now densely built up property was then described as an “expanse of land and… groves of trees.”  A decade later, when the Sisters of St Joseph abandoned the property for the current site of St Mary’s School for the Deaf, Jesuit Fathers purchased the land to farm in 1874. In 1911, the Fathers built Canisius College there.

The Sisters also purchased 30 acres of land across Main Street from St. Vincent’s in 1883. The frontage of this land is now part of the Canisius College Campus, and the rear portion is Medaille College; Mount St Joseph Academy when it was built. Sister Mary of the Sacred Heart Dunne wrote about in The Congregation of St. Joseph of Buffalo:

No more desirable property than this, for its purpose, could be wished for. Situated at the north entrance to Delaware Park, overlooking the great expanse of Park Meadows and, on two sides, adjoining Forest Lawn, Buffalo’s City of the Dead, the chance for seclusion was ideal. The place had been the home of George Bailey, an English Gentleman whose artistic taste led him to lavish time, care, and wealth upon a spot already beautiful by nature. It was known for many years as one of the finest estates in the surrounding country with its extensive lawns, patterned garden plots, fruit orchards, patches of forest with trees from every clime and a charming residence of English Architecture. Time brought about a change of fortune for the owner and there was a rumor of putting the property in the market for sale. Many who had hoped one day to secure it were deterred from opening negotiations because of the price when a fire occurred. The residence was destroyed and a sale became imperative. The fact that the pastor of the nearby church saved the life of the owner, now an invalid, by carrying him out of the burning structure, dispelled whatever of prejudice may have existed against letting the property fall into Catholic hands.

That was the sanitized version approved for publishing in the Sister’s official history. The well told tale told by early Parksiders was closer to what Michael Riester wrote in the Parkside News in 1998:

For years, Mother Mary Anne Burke had pleaded with Bailey to sell the former S. V. Ryan estate to the sisters.  Despite his refusals, Mother Mary Anne prayed that he might change his mind. By 1883, Mr. Bailey was elderly and an invalid when Rev. Martin Phillips, Pastor at St. Vincent’s, was aroused from his slumber by the roar of fire at the Bailey Estate, directly across Main from the church. Father Phillips risked his own life, charged into the building, and saved Mr. Bailey. Soon thereafter, Bailey sold to Mother Mary Anne and the Sisters of St. Joseph, who erected a motherhouse on the grounds in 1889.

The cornerstone laid in 1889, the Mother House and Academy of Mt. St. Joseph was completed on the site of the former George Bailey home by 1891 for the sum of $80,000. From the 80 foot vantage-point of the cupola, it was written that “the panorama of the entire city was visible, and, on clear days, the shining mist of the mighty Niagara (could also be seen).”

To raise money to add to the buildings the Sisters had constructed, in 1908, the Sisters sold ten lots facing Humboldt Parkway and raised $150,000. Coming full circle, these properties, and the homes on them are now the property of Medaille College, which was originally built to house Mt. St. Joseph School for Boys.

Mother Mary Anne was a forced to be reckoned with, but also a gentle soul. On the Anniversary of her silver anniversary as a sister, Fr. Patrick Cronin wrote in the Union and Times, on December 26, 1888, “A woman of rare worth is Mother Mary Anne. Large-minded, just, generous and kind, her heart and brain have especially fitted her to be the guide of others… The history of her life and labors would be the History of the Sisters of St. Joseph in western New York. The tiny mustard seed of three Sisters and four deaf pupils in 1854 has   developed into a body of one hundred-fifty Sisters, fifteen schools, a property unequaled for beauty… and an Institution for the Deaf which is the rival of any other of its kind.”

Anna Bancroft Coushaine wrote about the St. Mary Le Couteulx Deaf Mute Institute in the Buffalo Courier in 1901, saying it had been furnished with “every modern convenience to be had in the home of wealth and refinement,” and was a great atmosphere to for the pupils to learn to “talk with their fingers, which they do just as rapidly as hearing children can speak with their lips.”

The Church of the Good Shepherd

Back in the middle of Parkside proper, in the mid 1880’s, Elam Jewett began plans for developing a piece of his property to act as a central meeting place for the fledgling Parkside neighborhood, to honor his friend and late pastor, and to serve as a beautiful place of worship.

As previously mentioned, Jewett was a devout Episcopalian, and was a vestryman at Trinity Episcopal Church downtown. He and his wife were rather close with the pastor of Trinity, Rev. Edward Ingersoll. When Ingersoll died in 1883, Jewett made every attempt to join with the church in an attempt to build a suitable memorial to Ingersoll. When an agreement on what was to be done couldn’t be reached, an aged Jewett poured all of his energy into an effort that would memorialize his friend, and at the same time  cut down his long, dusty ride to church every week. Plans for the Ingersoll Memorial Chapel, soon to become Good Shepherd Church, were set in motion.

From his time at Trinity, he was acquainted with men and women of the relatively new and idealistic Arts and Crafts movement. He contacted the firm of Silsbee and Marling (later Marling and Burdett) to design the church. Herbert Burdett was an early assistant in the office of H.H. Richardson, and helped capture the Richarsonian style that Jewett was after in his church. Work began in 1888, with the cornerstone laid just months after Elam Jewett’s death in 1887.

As the structure was being completed, it was outfitted with nine prime examples of Louis Comfort Tiffany windows, most notable the representation of the Good Shepherd carrying two lambs in the chancel. The work was said to be among the last works to be done by Tiffany himself. 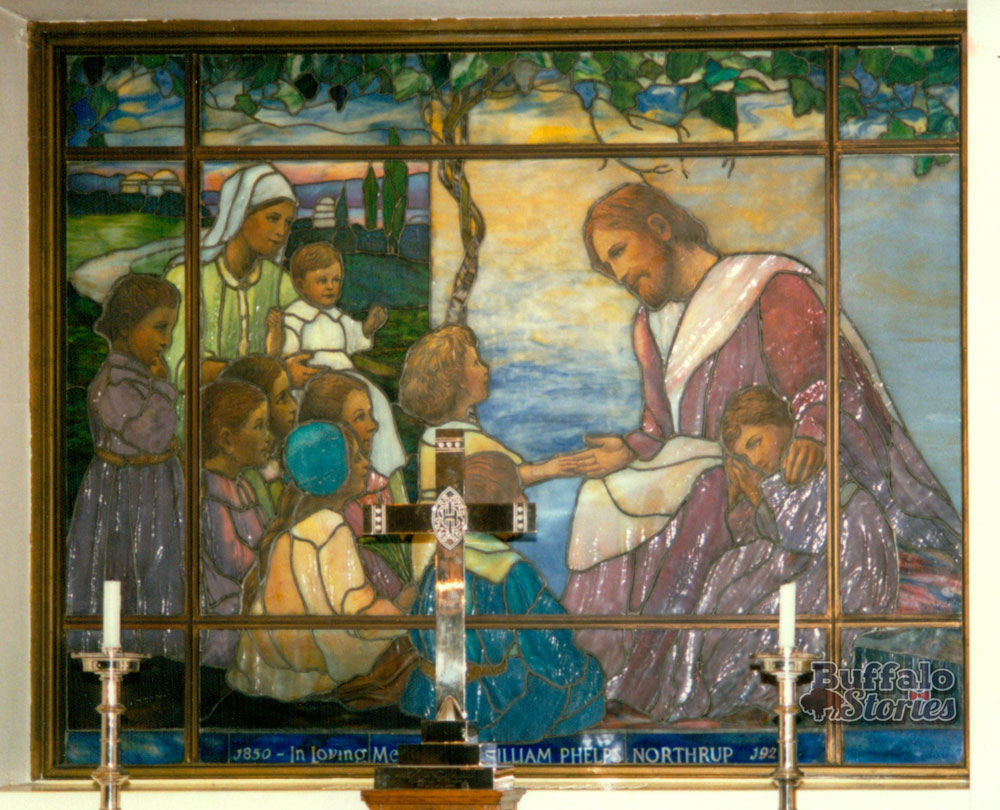 Another Tiffany window, a scene of Christ with children, is found in Good Shepherd’s children’s chapel. The children are said to be modeled after the children of Jewett’s nephew William Northrup, as well as other kids of the neighborhood.  (See above.)

As published in A Century in the Fold: A History of the Church of the Good Shepherd, Good Shepherd’s first pastor, Rev. Thomas Berry, wrote his view from the back porch at Jewett’s Willowlawn estate, as the church was being built. Parkside was still rather rural in 1888:

Contiguous to the lawn yet separated from it by a picket fence and a hedge of stately roses, was a garden. Oh! What a garden with its old fashioned flowers and its prim borders, where children romped and through which Mrs. Jewett often led her guests. Departures from the house were always accompanied by gifts of flowers or fruit, wile the tables of many less fortunate people were literally kept supplied with vegetables in season.

The first service was held at Good Shepherd in March 1888, at which time from the steps of the brand new church, the Rev. Berry could see only trees, grass, and the Jewett Homestead. It was Jewett farmland for as far as the eye could see, and it was from that corner that Parkside was to blossom.

Only two years after that first service at Good Shepherd, in 1890, prominent Buffalo Architect William Sydney Wicks, partner of E.B. Green in the firm Green and Wicks, built his English Tudor mansion across the street from Good Shepherd on the corner of Summit Avenue and Jewett Parkway.  Wicks was an early and long time promoter of the Parkside neighborhood, and kept his neighborhood in mind as served as Park Commissioner from 1897-1900. The Wicks Mansion remains to this day one of the more recognizable landmarks in Parkside.