The worst kind of Buffalo winter weather was working its way through the clouds at the same time Continental Flight 3407 was, ten years ago today. 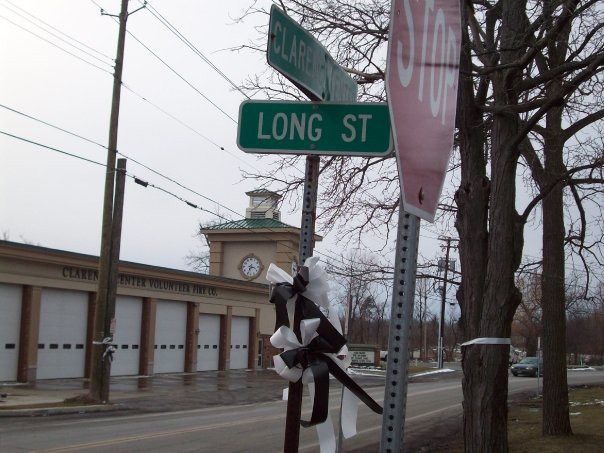 Then in a moment, fifty people who were just living out a day in their lives, instantly no longer were.

There was the fact that it happened right here, the horror of the numbers of lives lost all in a single instant, and the terror of the flames, and the reminder of the fears that so many of us hold in our own hearts.

As a community, we are remembering these fifty and holding up those who loved them in prayer and admiration.

Over the last decade, our community has seen marvelous strength woven from the brokenness of this tragedy.

Robin Tolsma and Karen Wielinski have both written books since their husbands lost their lives that night. Their willingness to publicly grieve has helped so many of us in dealing with our shared grief, but also serves as a role model in how to grieve.

Led by the work of Robin, Karen, and many great journalists, as a community Buffalo remembers and has help in better understanding that singular moment and its aftermath in a broader context.

While generally I consider it my honor to help provide context to the happenings of Western New York’s past and present– I’m also glad that I am not spending the week engrossed in helping craft this narrative. I’m satisfied to sit this one out. It’s still too real and even physically painful.

My eyes are wet and stinging, and panic’s familiar tingle and edginess fills my body as I force myself back to that day and the days and weeks that followed.

In many ways, the post traumatic stress I live with from covering this story and dozens of other stories you might or might not remember, is primarily attributable to my terrible basic reporting skills.

Intuitively, my style as a journalist moved away from facts and figures– and toward trying to make a listener or reader feel some part of what was happening.

I wouldn’t have put it this way during the decade that I was a daily general assignment reporter, but I’d rather have spent my minute in a radio news report helping listeners feel the emotion of the mom yelling at the school board and the measured fidgety discomfort of the board member who voted against a budget than to spend that minute explaining the vagaries and dollar amounts attached to budget lines that were slated for elimination.

Allowing myself to feel the angst of a mom whose children might be robbed of art education in middle school makes for a much more enticing story than a comparison of numbers.

In that process to feel the emotion of an event, I become greedy, absorbing every detail– not even necessarily to report on– but to give me the proper context to report from.

I don’t even have to choose the words when the environment can choose them for me; they just flow. So– I lap up detail. And digest it into news stories. And the best stories are well-received, and I get hungrier for the details which don’t make necessarily make it into a the produced product—but ultimately help shade the story and give me a sense of depth and perception that allow listeners and readers to connect more fully with what I am reporting.

This is the subconscious process which accompanied me to Clarence Center a decade ago.

You couldn’t talk about the tragedy unfolding at the scene without understanding the searing odor which left me feeling slightly nauseous and with a chemical sear in my nose and throat with each breath.

There was so much to take in, but story I saw which needed telling was the raw humanity of the usually super-human.

Over and over again, the strong ones– in a private moment– showing signs of crumbling.

Without thinking too deeply about it, the weeping undertaker comes to mind. The minister who just before facing the congregation, looked like he was about to vomit. The police officer who talked a tough game but had only darkness and sadness in his eyes. The rattled fireman who shared a story—and then immediately had the look of someone who felt like he said too much. We agreed that there was no need to share that misery with the rest of the world, and the story has never left my lips.

That firefighter’s story will stay with me, in graphic horror, until the moment I die. Trust me when I tell you that your life is better without knowing what that man went through. I know my life would be, but it was my job to make sure that people in Buffalo and around the world knew the horror without necessarily knowing the details.

I am a journalist who suffers greatly from post-traumatic stress, and I write this not just for me—but for the thousands of others who don’t realize they are suffering or who realize it but feel foolish asking for help or “making themselves the story.”

I didn’t realize it at the time. Not even when I had my first panic attack in the newsroom and didn’t know what it was—and as my brain felt like it was unraveling, I thought I was going to die on the spot.

It didn’t occur to me when I could barely function, alone in the newsroom on Christmas Eve 2012 when a Rochester-area man set his house on fire, and then killed two firefighters who came to put out the fire.

In the past year, driving in the car, listening to the news and hearing firefighters speak from the scene of the devastating wildfires in California—I pulled the car over, afraid I was going to vomit.

The talk of this anniversary stirred these feelings, and I share them with the hope that it might help someone. The pain and trauma caused by the death of fifty amazing individuals lives on in my heart, bleeding over into areas of my soul where I never intended it to live.

And that’s what PTSD is, I guess, and once again, that’s why I write and share this– but the reason I carry this suffering is for the sake of the story, and this story is one that I will never lose sight of.

I’ve spent time over the last couple of days recalling many of the memories of those who perished that day. I feel like I know a few of those who died—and that their memories live on is a testament to their loved ones.

I’m struck by the strength and courage of many family members who have fought to make sure that similar instances don’t lead to anymore deaths.

I also remain moved by the undertakers, ministers, police officers, firefighters, reporters and so many more– who leave parts of themselves behind for the well-being and healing of others every day.

None of us really knows how we might respond in the face of great tragedy, no matter our role in it.

Most of us, I think, find out something new about ourselves, and wind up spending the rest of our lives trying to understand how to make that new knowledge work as a piece of who we are.

God bless those 50 and those still trying to put the pieces back together.