Burt Reynolds spent time in Buffalo during the shooting of “Best Friends” in 1982.

He happened to be in Buffalo for a bit of history.

Reynolds and his co-star Goldie Hawn were at the Aud when Wayne Gretzky broke Phil Esposito’s single season goals record.

Along with Oilers GM Glen Sather, Gretzky, Hawn, Reynolds and Espo celebrated with a photo in the Aud Club at Memorial Auditorium, in front of that amazing Sabres latch hook rug.

Like most good things in Buffalo in the 80s, Mayor Griffin played a small role in “Best Friends”– he can be seen as a kid’s hockey coach in one scene.

From The Complete History of Parkside: 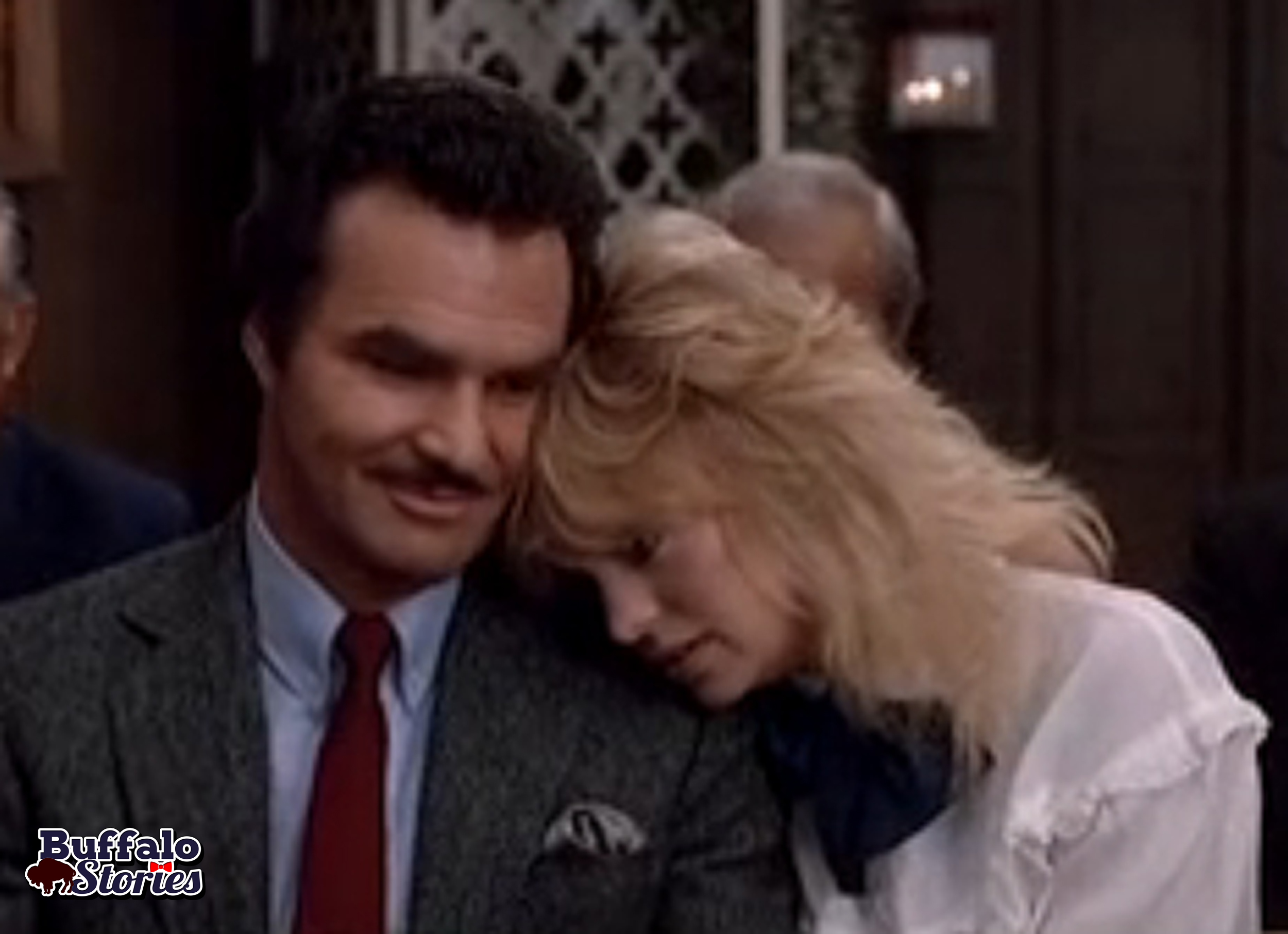 Though usually thought of in terms of a staid, august, and venerable neighborhood, Parkside has also seen its share of glitz and glamour.  For the same reason so many Buffalonians are attracted to its wonderful architecture and tree-lined streets, Hollywood producers have also taken notice over the years.

For three weeks in February, 1982, Summit Avenue went Hollywood for a week. Burt Reynolds and Goldie Hawn spent that time holed up at 45 Summit Avenue, shooting scenes for the big screen motion picture Best Friends. The local accommodations were much cheaper than the LA high rollers were used to, as Ellen Parisi wrote in her History of the Good Shepherd Church, only a few doors down from the home where most of the film was shot:

In order to accommodate the cast’s and crew’s noon meal, the advance people made arrangements to rent Jewett Memorial Hall. “Probably the biggest mistake I ever made,” said Fr. Jerre Feagin, Good Shepherd rector 1978-82, “was not charging them more. When they asked how much it would cost to rent the hall for three weeks, I said, ‘One Thousand dollars.’ that was a lot of money to the Church of the Good Shepherd. But the man looked at me with great surprise in his eyes, as if to say, ‘Is that all?’ and he immediately wrote a check.”

The Parkside home of Alex Trammell and the Buffalo snow provided the perfect backdrop for producers. Signs outside of the home pleaded for untracked snow… But one four-legged critter didn’t see the sign and spoiled the scene producers had hoped for, namely virgin, freshly fallen snow. But that errant dog didn’t provide the only challenge to filming:

“There was one problem with a neighbor who didn’t want (the film people) there,” Fr. Feagin continued. “It was a nuisance. They roped the streets off. Mounted police were all over keeping intruders out. Big sound and power trucks came in at 5am and parked all over the streets. There were catering trucks selling things. It was like a carnival. Well, this one neighbor didn’t like it, and in protest, every time they’d begin filming, he’d run his lawnmower. In February. The director, Norman Jewison, approached me and asked me to do something. The man causing the trouble was a Roman Catholic, so I called Fr. Braun from St. Mark’s and he straightened it out. That movie company was only a few hours from packing up and leaving town in search of a new location if Fr. Braun hadn’t been able to stop the noise.”

Hollywood was back in Parkside the following year, this time at the corner of Main Street and West Oakwood Place for the shooting of The Natural. Glenn Close and Robert Redford spent a few days in August, 1983 at the Parkside Candy Shoppe. The no-nonsense long time owners of the ice cream parlor, Ted and Sandy Malamas, told the Parkside News in 1988 that they were impressed with Close, who garnered an Academy Award Nomination for her role in the film. Given their silence on the rest of the cast, one can draw ones own conclusion.

The scenes shot inside the store were, according to the story, taking place in Chicago. A large matrix of I-beams was erected of Main Street at Oakwood to give the appearance of Chicago’s elevated train. Filming of the movie also took place at War Memorial Stadium and All-High Stadium, the Buffalo Schools field just up the street behind Bennett High School.

After a twenty year hiatus from Tinsletown, Parkside returned to the small screen in 2003 as the setting for the MTV Reality Series Sorority Life. Season 2 of the show featured the Delta Xi Omega sorority from the University at Buffalo. Their sorority house for 2002 was at the southwest corner of Crescent and West Oakwood.  Shooting for the show happened all over the neighborhood, but perhaps most publicly at Kostas Restaurant on Hertel Avenue, where cameras followed one of the sisters to work as a waitress.

Parkside also played a dark role in a similar MTV show shot in Buffalo the following year. Three UB students were arrested after breaking into the Buffalo Zoo in 2003 as a part of a videotaped stunt for the show Fraternity Life. In an incident reminiscent of stunts dreamt up after a night of collegiate drinking at the Park Meadow two decades earlier, The pledges were to break into to the zoo, and take an animal home as a pet.