BUFFALO, NY  – For me, hearing the name ‘Stan Jasinski’ conjures up images of my grandfather, sitting on his South Buffalo porch listening to cassette tapes of polka radio shows he had taped the previous weekend. Ed “Edziu” Cichon would sit out there, looking at the comings and goings on Seneca Street with a serene smile on his face, enjoying the music, his grandkids, and life in general.

It was a great break for Gramps, from his numerous jobs- from tinsmith at Buffalo Color and National Aniline, to ticket taker for the Bills and Sabres, to bet taker at Buffalo Raceway.

For most of my generation, I would imagine thoughts of Stan Jasinski beckon thoughts of grandparents, and this is true for Edmund Haremski as well.

His family owned Lucki-Urban Furniture, sponsors of Jasinski’s broadcasts from the 50s-90s. He remembers playing the two transcription records from which these audio clips came in his grandma’s basement as a little guy.

The half hour program was recorded on these transcription records, sometime before Christmas Day 1954, for playback on that date. The program is completely on Polish, save the opening and closing voiceover by an WKBW staff announcer, perhaps Larry Brownell.

For those who remember listening to Jasinski near the end of his broadcast career as I do, his cadence and voice is amazingly consistent, sounding virtually identical, and very much recognizable, 40 years earlier.

You’ll hear Stan speaking between the songs, and if you’re like me– with a very limited understanding of Polish– The only words you’ll understand are a few numbers, and the words “Lucki-Urban’ and “Stromberg-Carlson,” the latter being a manufacturer of some of the finest radios of that era. 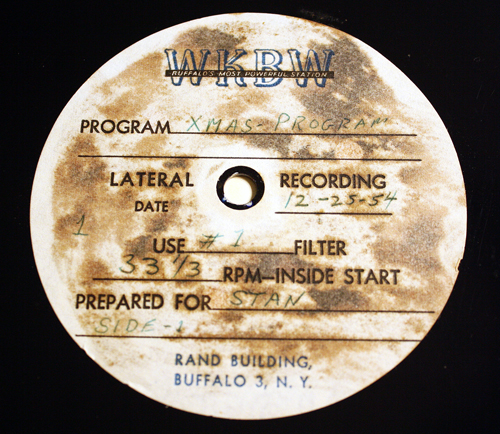