Courier-Express art critic and SUNY Buffalo State art professor D.K. Winebrenner had a weekly column in the Sunday paper where he opined not just on art, but on the state of aesthetic in Buffalo.

In a December 1967 piece, Winebrenner railed against the “commercial invasion” of Allentown.

“The Chairman of artistic rehabilitation in the area, artist Virginia Tillou, has expressed alarm that stands, restaurants and taverns along this dignified thoroughfare may result in a ‘honky-tonk’ appearance and destroy the efforts of the Allentown Association to upgrade the surrounding area,” wrote Winebrenner.

Red flags went up when Burger Chef opened in the spot now occupied by Tim Hortons on Delaware Avenue near Allen Street. The fear was that Allentown would begin to fill with “garish establishments” like those found in suburbia – especially around Sheridan Drive and Niagara Falls Boulevard.

“There is a new kind of pop architecture that is as audacious (and as annoying) as pop art. It is characterized by a general indifference toward standards and tastes of the past, borrows from dada and art nouveau (past and present), and flaunts architectural precepts (past and present) without batting an eye.

“Referred to casually as ‘hot dog stands,’ these culinary emporiums often specialize in less prosaic edibles such as hamburgers and other sandwiches, doughnuts and coffee, or the gastronomical delight of fried chicken. Some of these pop stands even sell pop.

“They come in many sizes, all small; and in many shapes, all boxes; but with imaginative appendages that conceal their humble concrete block structures, such as sweeping gable roofs that meet the ground, or more sophisticated modified mansards that mask nonexistent garrets. Often they are crowned with exotic spires and cupolas.

“Gone are the simple structures of local entrepreneurs, (albeit covered with a motley assortment of signs provided by distributors of ginger ale and cola) and in their place are standardized replicas of uniform designs which extol corporate images of national chains from coast to coast.

“Fortified with the advice of exterior decorators, the universally uniform trade marts come in bright colors and patterns that stand out against the Cape Cod homes in the suburbs and the pathetic patina of old city buildings, giving an aura of great importance to small structures surrounded by ‘black on black’ mats of black top. The effect is heightened when lighted colors, spotlights and neon tubes contrast with enveloping night.”

Winebrenner, who was one of the founders of the Charles Burchfield Center at SUNY Buffalo State, died in 1975 at the age of 66. While he might have been pleased that his dissertation on garbage fast-food architecture was found and shared 52 years after it was first written, he probably wouldn’t have been pleased that the driving reason behind sharing the story was to share the wonderful photos of late ’60s eateries that accompanied the original piece. 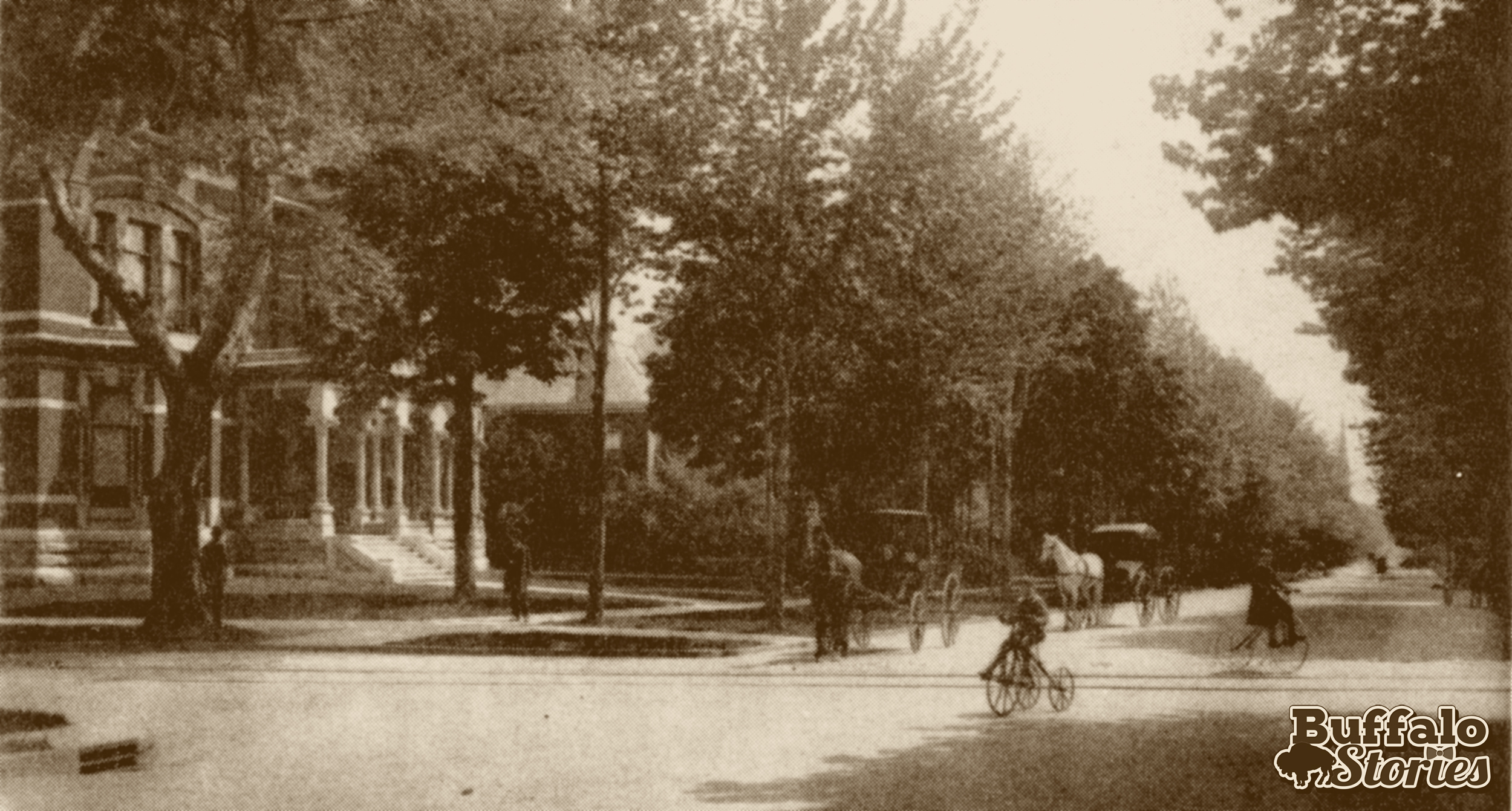 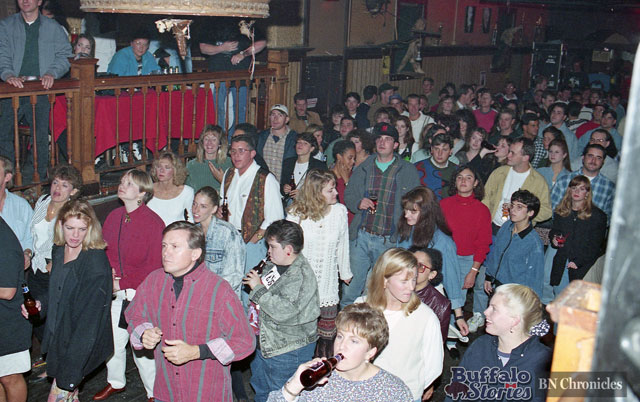 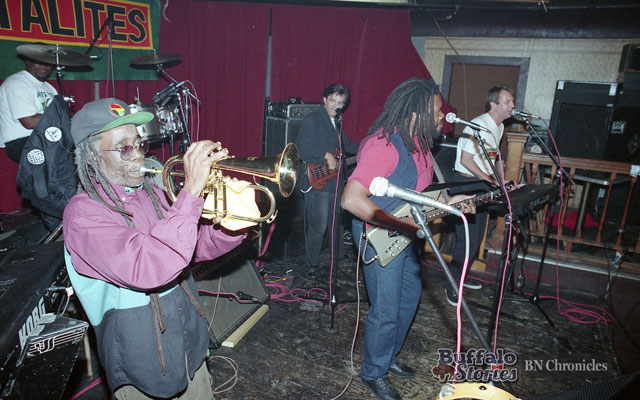 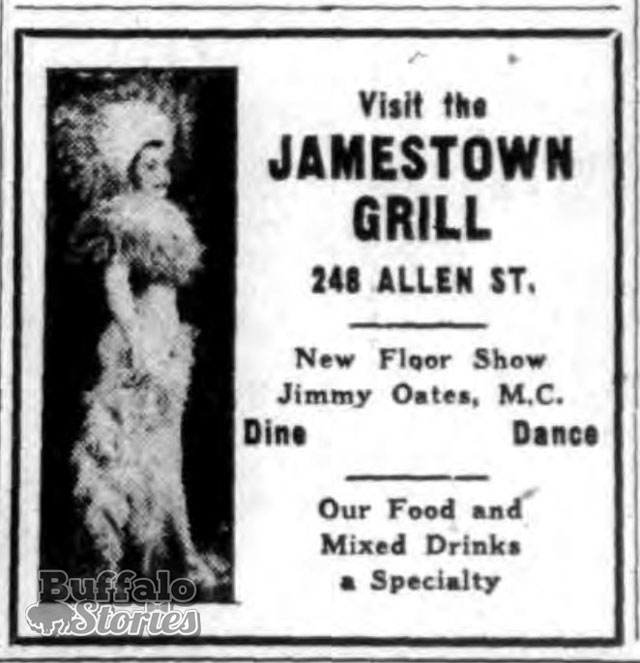 Nationwide controversy erupted when the pornographic film industry took a step toward legitimate films with the release of “Deep Throat” in 1973.

Unlike previous adult flicks, this one featured a plot along with actual attempts at acting and cinematic values.

According to an Associated Press account, the film was “sneaked into Buffalo” one weekend in the fall of 1973 and played at the Allendale Theatre on Allen Street. That Monday, State Supreme Justice Theodore Kaiser viewed the film, along with co-feature “When the West Was Fun,” and ordered the films seized and the theater manager, 73-year-old Benjamin Solomon, arrested and charged with violating obscenity laws.

That weekend, as word spread of the controversial film being shown in Buffalo, a Channel 2 news crew set up outside the Allentown theater to talk with people on their way into watch the movie. When Solomon saw this, he bolted from the ticket booth wildly swinging at reporter Susan King and cameraman Steven Cocklin with a hammer hatchet. 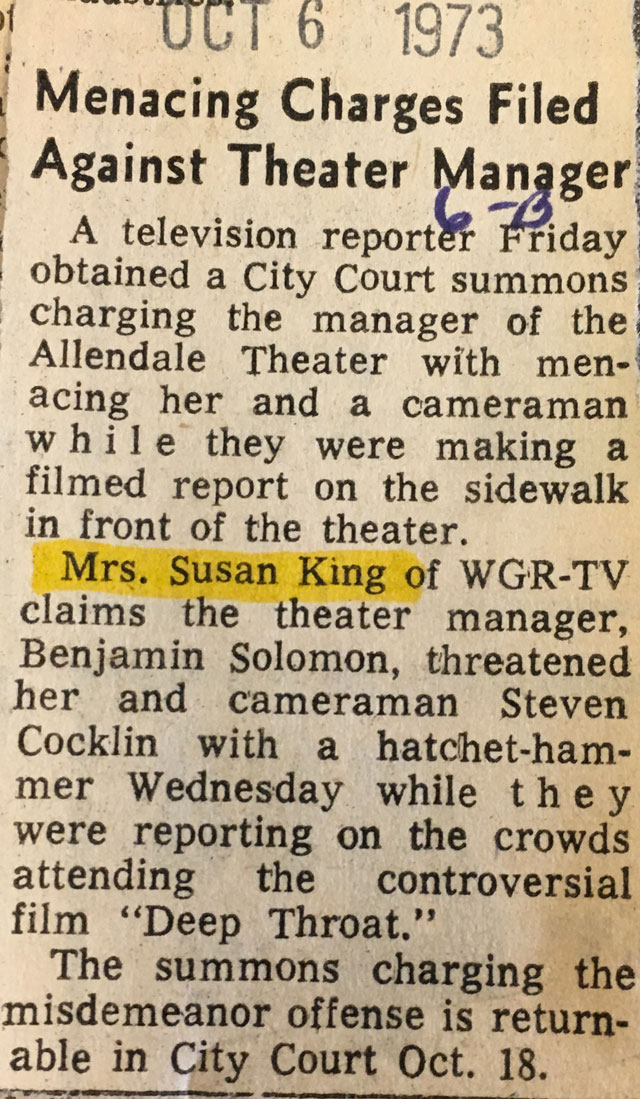 He tried to hit King and missed. King, who was Buffalo’s first female television news anchor after coming to WGR-TV in 1972, filed a report with police and Solomon was charged with menacing and harassment on top of the obscenity charges.

First as the local news anchor during the “Today” show, then as a featured reporter and weekend evening news anchor, King had quickly become one of Buffalo’s favorite television personalities in only about two years in Buffalo. She also spent several months as the primary weekday anchor at Channel 2 after Ron Hunter left the anchor chair. She received widespread critical acclaim, but was ultimately replaced by Rich Kellman. 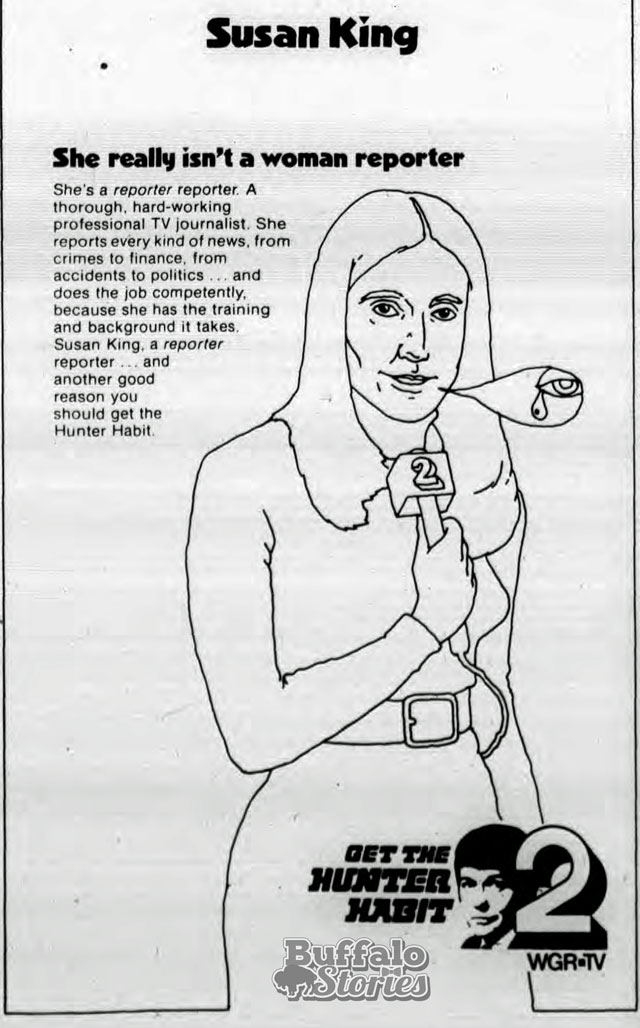 At the time, there were wasn’t a television station in the country that employed a permanent, solo female news anchor. Channel 2 and King weren’t bound to be the team to cross that historic threshold, but there was no disappointment in an interview with The News.

“I can’t say that they lead me on,” King told The News in 1974. “It was a wild summer and I learned a lot,” she said, making reference to Watergate and Richard Nixon’s resignation, all which came during her time in the anchor chair. 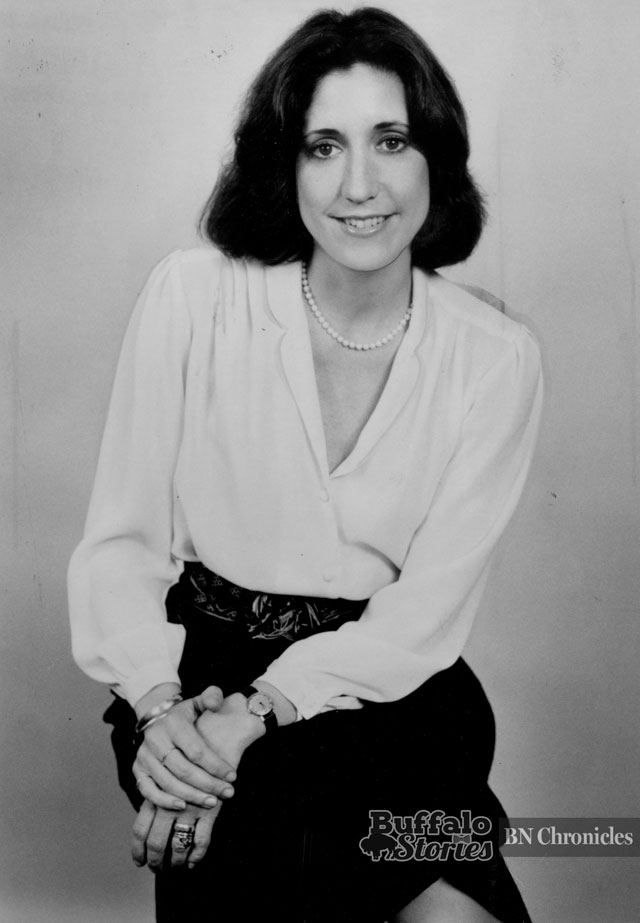 Within a few months, King went from Buffalo to a station in Washington, D.C., before moving to ABC as a White House Correspondent.

Susan King is now the Dean of the UNC School of Media and Journalism in Chapel Hill, NC.

As for “Deep Throat,” in the end, the owners of the Allendale were fined $3,000 for showing the film. Theater manager Solomon admitted to swinging the axe at King, pleaded guilty, and was given a suspended sentence. The 103-year-old Allendale Theatre is now the home of the nonprofit Theatre of Youth Company.

Controversy erupted again in Buffalo the following summer when the Granada Theatre on Main Street in University Heights started showing “The One and Only Throat.” A judge put a ban on the showing of the film under that name as well — but not before ads made it into papers around Western New York. 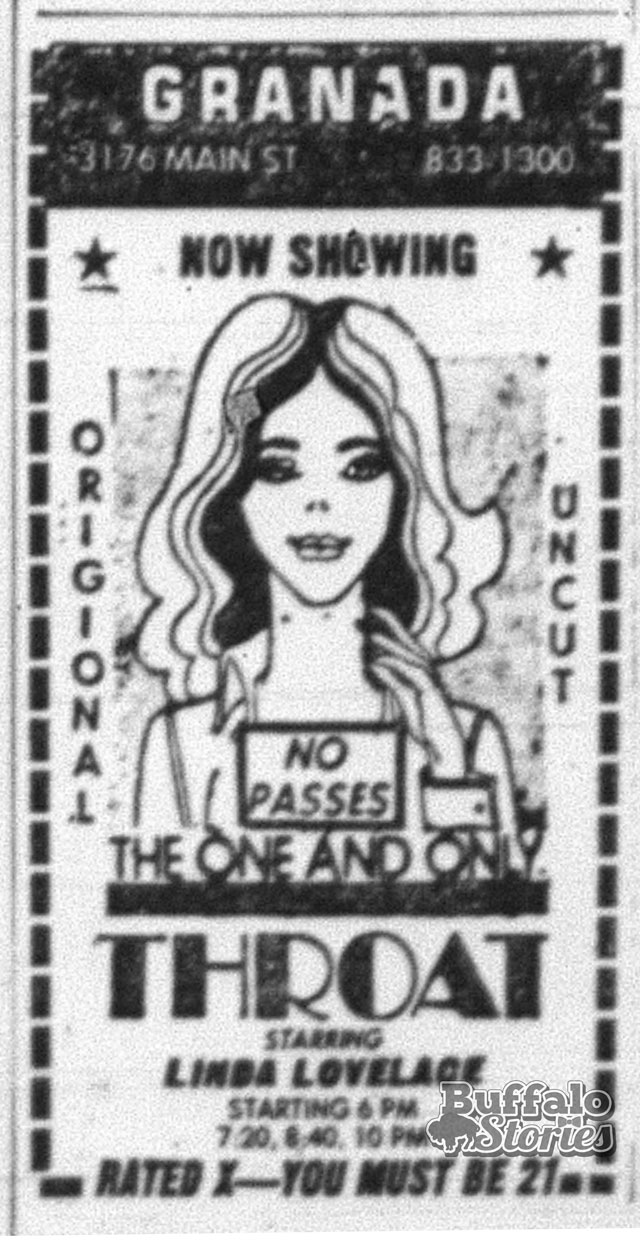 When Buffalonians talk about neighborhoods in danger of being lost to freefalling divestment, Allen Street has not been a part of that conversation for a very long time. 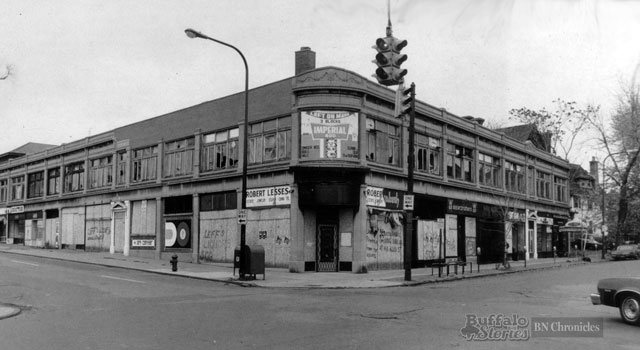 Thirty-five years ago, the story was a bit different. “Boarded Up Dreams” was the title of this photo as it appeared in The News in 1981.

The “burned and boarded up” buildings on that corner had been in the sights of developers Stanley Collesano and Dennis Insalaco, but plans for all four corners fizzled when three banks pulled $3.1 million in promised cash — which in turn led to $1.6 in federal urban development grants going away.

The building, minus the boarded windows, still stands a block from Main Street and the hope of the new Children’s Hospital and Medical School, visible from the building’s stoop.

On April 28, 1999, News Reporter Tom Buckham took a look at a Burchfield watercolor that had come up for auction on a website “known as Ebay.” Fifty-five years earlier, the Albright (not yet -Knox) Art Gallery opened a series of comparisons between Burchfield paintings and photos of the scenes painted. Included in the series is a Wadsworth Street home in Buffalo.

The art center bearing the name of the renowned artist, who lived much of his life in Buffalo, has been a part of the arts renaissance in the city. In 2013, the Burchfield Penny Art Center, at 1300 Elmwood Ave., celebrated five years across the street from the Albright-Knox.

“The different languages spoken by the camera lens and the artist’s brush are illustrated in these two versions of the same scene in Wadsworth Street near Days Park.” 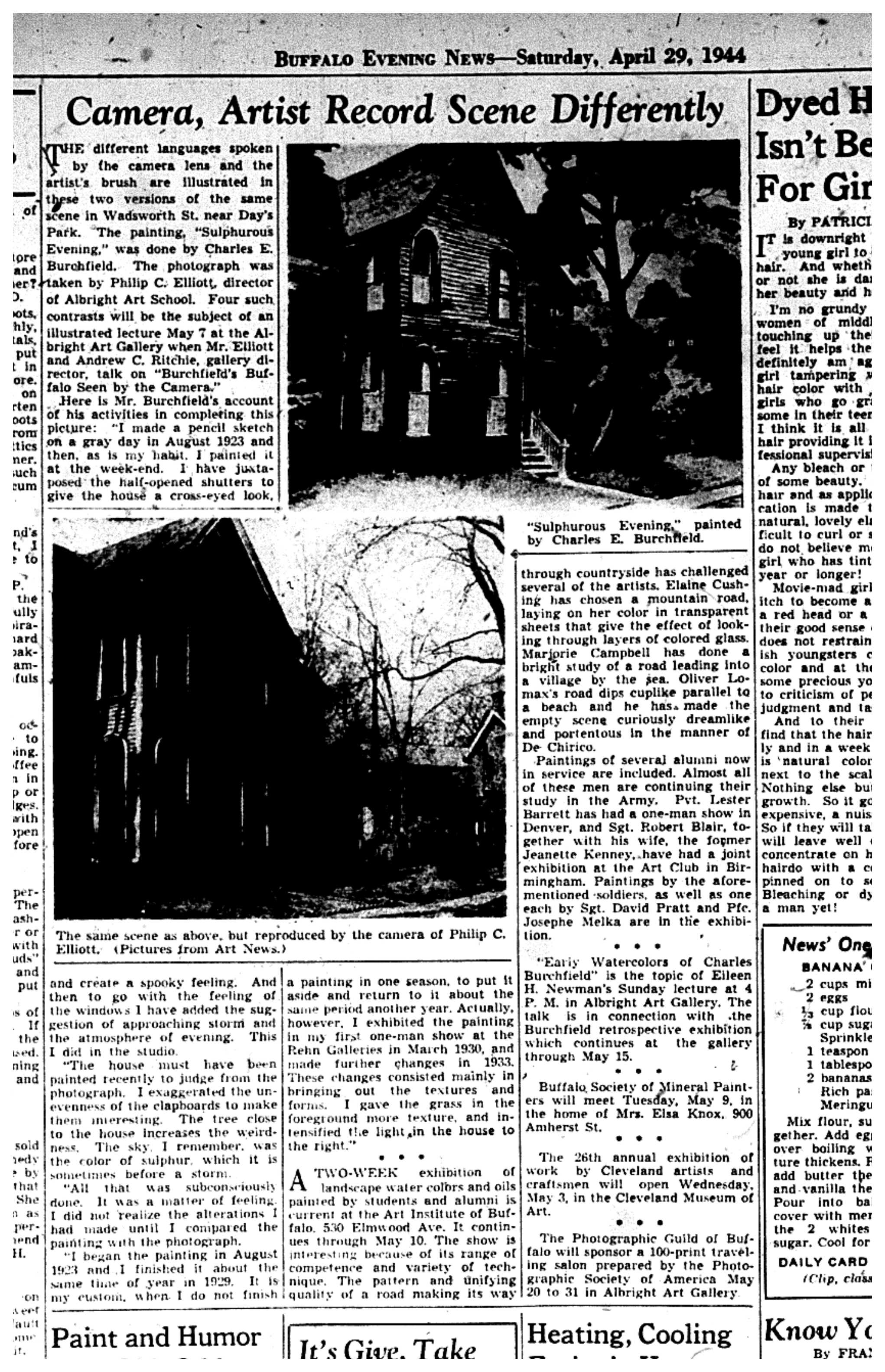