Meet and reacquaint yourself with the people and stations that have created and reflected who we are as Buffalonians with this 432-page in-depth look at the first 50 years of radio and television in Buffalo.

Packed with more than 600 photos, it’s a look at the stories of the people, places, and events that have entertained and informed generations of Western New Yorkers over the airwaves– and under our pillows, into our cars, into our living rooms, and into our hearts as a part of what makes us Buffalonians.

From the scholarly to the nostalgic, the earliest pioneering days of Buffalo radio will come to life with new research on Buffalo’s status as one of the birthplaces of modern radio—and then the birth of rock ‘n’roll radio here a decade later, about the same time television was wrangling more and more of our attention.

We visit Clint Buehlman and Danny Neaverth; Uncle Mike Mearian and Rocketship 7; The Lone Ranger & KB’s War of the Worlds; Meet the Millers and Dialing for Dollars; John Corbett & Chuck Healy and Irv, Rick & Tom; The Hound and John Otto and so many more of the great broadcasters who were there as we experienced the best (and worst) times of our lives.

The book’s covers by themselves are a study of the century of broadcasting in Buffalo, with another 269 images, showing some of our favorite stars in action.

Sales of the book benefit The Buffalo Stories Film Conservation Initiative, which funds the storage, maintenance, digitization, and interpretation of thousands of hours of discarded Buffalo film and video from the 1960s-1990s.

Author Steve Cichon has spent three decades in Buffalo media in radio, television & print. His journey started as a wide-eyed 15-year-old at WBEN learning about radio, journalism and life.   The lifelong Buffalonian sees this, his sixth book, as a kind of family history– as these are the stories of the people who made him the person he is today.

Available for pre-order now in The Buffalo Stories Bookstore.

Books are expected in stock by mid-September.

The story of a TV anchorman so universally loved in Western New York that only one name is necessary… Irv. From the 1950s through the 1990s, Irv Weinstein informed and entertained generations of Buffalonians with his unmistakable style in writing and delivering the news. Together with Rick Azar and Tom Jolls, Irv was a part of the longest running TV anchor team in history, and their story is the story of Buffalo over the last half century.

From the time long ago… When our TV picture looked like it came from the bottom of a Coke bottle in fuzzy black and white, to today’s electronically augmented color; one man in Buffalo television has been the leading presence. As Clint Buehlman once dominated Buffalo radio, as Walter Cronkite dominated network news, so Irv, through his intuition, aggressive style, his personality, has dominated the local news scene. -Phil Beuth

Steve Cichon is an award-winning journalist, author, and historian. The Buffalo News calls him “A true Buffalonian,” and says “he knows this town.  The winner of a Buffalo Business First ‘40 Under 40’Award in 2010 and dozens of Associated Press Awards as an anchor and reporter with WBEN Radio since 2003, Steve has worked in radio and television in Buffalo since 1993.

Cichon’s 2009 book, ‘The Complete History of Parkside,’ was described by Western New York Heritage Magazine as ‘packed with numerous facts from start to finish, (A) fun read through one the city’s most beautiful residential neighborhoods.’ Steve and his wife Monica are the care takers of their 1909 EB Green home in the Parkside Neighborhood.

While Steve has spent years collecting the Irv Weinstein story, his interests also extend to the history of all of Buffalo and Western New York as well. He’s the curator, writer, and webmaster at staffannouncer.com, a website dedicated to preserving and sharing the Buffalo area’s pop culture history, particularly the history of Buffalo radio and television, and the numerous untold stories of everyday living on the Niagara Frontier.

Steve is available to talk about Irv, Rick, and Tom and many other Buffalo Pop Culture history subjects… Information on how by clicking here. 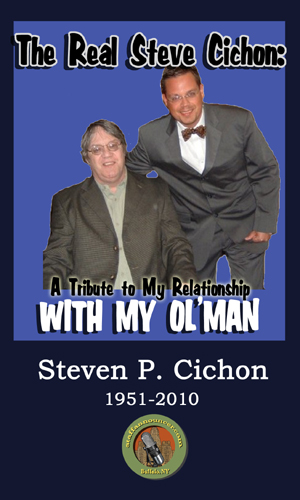