Before Memorial Auditorium was built in along Buffalo’s waterfront in 1940, the city looked at several different sites for a new convention center and auditorium.

At the time, the Broadway Auditorium was the largest and most-used event space in the city. Still standing as “the Broadway Barns” and the home of the city’s snow removal and other heavy equipment, the old Broadway Aud almost didn’t make it into the 1940s.

The 1930s aerial photo above shows one idea for a potential footprint of a new, modern Broadway Auditorium. Early proposals called for parking for 12,000 cars and at least 100,000 square feet of floor space.

The rancorous political banter over whether Buffalo needed a new auditorium and convention space, and where it should be built if needed, doesn’t sound too much different that the debates which continue on the same subject now, 90 years later.

“We don’t get big national conventions that should come to Buffalo for the reason that we have no decent place in which to house them,” said Niagara District Councilman John C. Montana, during a debate on the subject in 1929.

Many hoped that the new building would be in place by the start of Buffalo’s city centennial celebration in 1932, but the Aud didn’t open in what is now Canalside until 1940.

When work was started on the building on what was then “the Old Batavia Road” in 1848, the area was still rural and on the outskirts of the city. The church took 10 years to build and was consecrated by Bishop John Timon in 1859.

When the church closed in 1981, it was the oldest active house of worship in the city. After a massive fire in 1986, the church was lost to an emergency demolition.

More than any one building, the photo shows the Michigan Street African-American Heritage Corridor at a time when many of the now-long-gone buildings of the area were still active.

The Michigan Avenue YMCA is the large building just below the “Broadway Auditorium” label on the image. Built in 1927, it was torn down in 1977.

There’s also quite a bit of history nestled right around the “Broadway” label on this photo.

Built in 1845-49, Buffalo’s first African-American church and Underground Railroad stop, the Michigan Avenue Baptist Church, is visible to the left of “Broadway.”

Just below the “B” stands the Colored Musicans’ Club. Above the Broadway label stands Ann Montgomery’s Little Harlem Hotel.

It has been known for more than 70 years as the giant old building where the City of Buffalo keeps its snow removal equipment, but the history of what we now call the Broadway Barns goes back to the Civil War era. 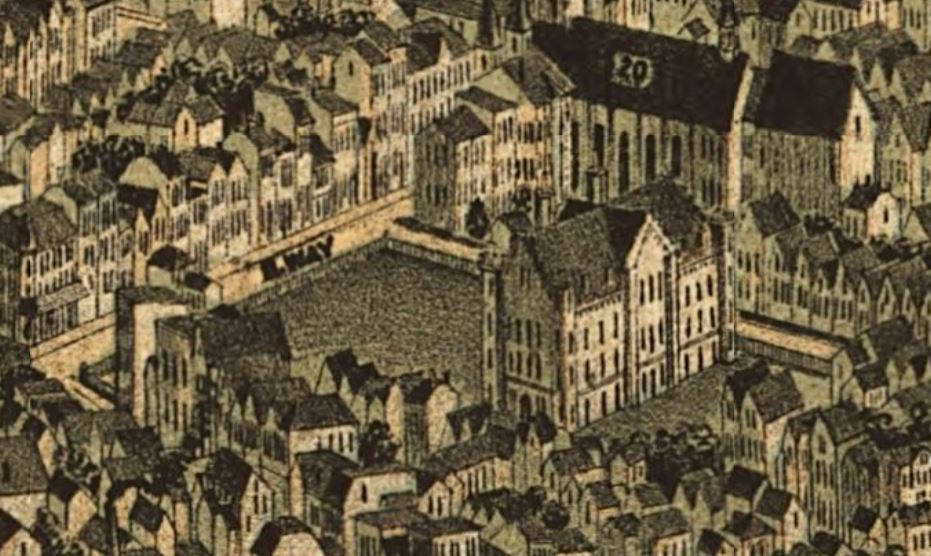 Built in 1858, the Broadway Arsenal was home to two local regiments during the Civil War. After the war, the building was turned over to the state as a National Guard armory.

The building was decommissioned as an armory in 1910, and with a new addition on the front, it became the Broadway Auditorium.

With the opening of Memorial Auditorium in 1940, the Broadway Auditorium’s usefulness as an entertainment venue mostly came to an end. In 1947, after $670,000 in renovations, the city first made plans to store heavy equipment inside the Broadway Auditorium.
A fire from a mishandled flare destroyed most of the original building in 1948, but the building remains the home of most of Buffalo’s big trucks, including the snow removal fleet.