Nearly single handedly, and through the pig-headed will of his convictions, Judge Samuel Wilkeson essentially invented Buffalo. 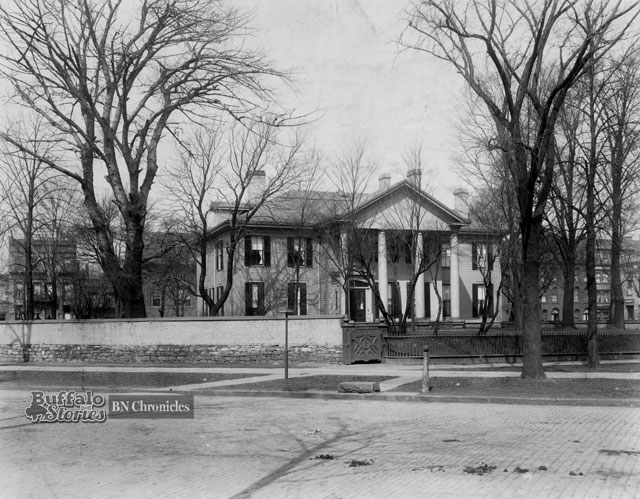 Wilkeson was born in Pennsylvania and first came to Buffalo as a soldier defending the village as it burned in 1813. Following the war, he made his home in the village as it was being rebuilt. As a trader in various items like salt and whiskey, Wilkeson understood the importance of a good port — and knew for Buffalo to grow, the harbor had to be improved.

Despite having never seen an artificial harbor in his life, in 1820, he started overseeing the construction of a new harbor in Buffalo. Two years later, with the widening and sandbar removal almost done, he argued that the planned Erie Canal should terminate in Buffalo, not in Black Rock as argued by future Niagara Falls pioneer and Secretary of War Peter Porter. Buffalo was chosen and the fate of the pioneer village was sealed.

The canal was completed in 1825, and the following year, Wilkeson built his stately home on Niagara Square. After holding a handful of elected offices and judgeships, Wilkeson was elected mayor of Buffalo in 1836 — four years after the city was incorporated.

But Buffalo was still barely a city.

“Buffalo was a pioneer settlement of rough hewn houses on the edge of a dense forest when Samuel Wilkeson had a vision of the important part the square was going to play in the upbuilding of the city,” wrote Roy W. Nagle, one of the great collectors of Buffalo’s history from the 1930s through the 1970s.

It was from this house that Wilkeson waged a national and international war against slavery — denouncing human bondage of any kind as un-Christian. He helped in efforts to colonize freed American slaves in Liberia, and the Florida plantation he owned and managed from Buffalo was one of few in the state which didn’t operate using slave labor.

The future of this “Father of Buffalo’s” home was decided when Judge Wilkeson’s granddaughter, who lived in the home until her death in 1903, called for its demolition in her will.

Most of Buffalo’s still-surviving fine old mansions had met with a fate she did not want to befall her lifelong home. Mrs. Wilkeson wouldn’t allow the place to become a boarding house or lodging house.

Shortly thereafter, one of Buffalo’s oldest homes was razed, and Buffalo’s first gas station was built on the spot. 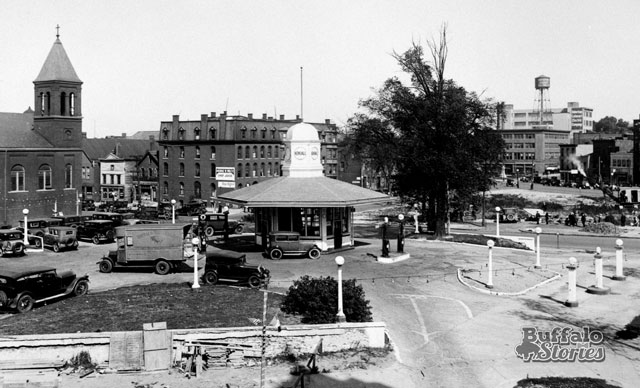 Note St. Anthony’s church to the left, which is still-familiar outside the back door of city hall. (Buffalo Stories archives)

When Buffalo’s current city hall was built in 1929, designers lined up the building’s pillars with those of the Wilkeson House.