Over the last few weeks, eBay seller wmlengadairy has been selling a huge collection of Buffalo area and Western New York milk bottle caps from the late 30s, 40s, and early 50s.

These are the paper lids which came on top of glass milk bottles, which were most often delivered daily to homes nearby the particular dairy by a milkman.

Many of these are extremely rare, and together show how the neighborhood dairy was an entrenched part of life not too long ago.

Adam Cornelius sold the dairy to the Weckerle Family in 1936, four years after George and Henry Weckerle sold their family milk operation to the Dairyman’s League.

Based at Main and Kensington, the operation had grown when this photo was taken around 1946.

When Sterling Amherst merged with Dairylea in 1971, the home delivery operations maintained by Sterling served 35,000 customers in Erie and Niagara counties, but all production operations moved from the plant at 3939 Main St. to the old Jones-Rich Dairy at 70 E. Ferry St. in Buffalo.

The old Sterling building seen in the photo still stands at Main and Kensington.

These days, Ilio DiPaolo’s a South Park Ave. landmark which fills two blocks with its Ringside Lounge and adjacent parking. A generation or two ago– it was the restaurant which stood in that parking lot which was the landmark.

Dairy Island was both the name of a restaurant and the milk brand produced by the Arcade Farms Co-op. The $150,000 facility was billed as a “modern milk plant and dairy bar” when it opened in 1947.

“We hope that Dairy Island will serve as a wholesome recreation spot for Blasdell and vicinity among young people,” said William Sadler, plant manager at the grand opening. Sadler was a Hamburg Town Councilman and later an Assemblyman.

In Albany, Sadler worked on the legislation which made the production of fortified skim milk legal, which Dairy Island marketed as “a boon to dieters.”

In 1951, management of the Dairy Island restaurant was taken over by the owners of the Colonial Kitchen chain, which had restaurants on Buffalo St. in Hamburg, Seneca St. at Buffum in South Buffalo, and the original location on Ridge Rd. in Lackawanna.

When the Dairy Island restaurant was closed and converted to dairy production use in 1954, a Colonial Kitchen restaurant opened across South Park Ave. in its place.

In the mid-1960s, the Arcade Farms Co-op merged with the Upstate Milk Co-op which took over the building, which was eventually purchased by Sorrento Cheese. The Dairy Island building was torn down in 1989 when Ilio DiPaolo bought the building to make space for a parking lot for his newly expanded banquet room.

All decked out here for Christmas 1937, Kart’s Dairy was at 2990 Main Street, “about 500 feet north of Hertel,” just south of where the NFTA’s LaSalle Park and Ride MetroRail station now stands. 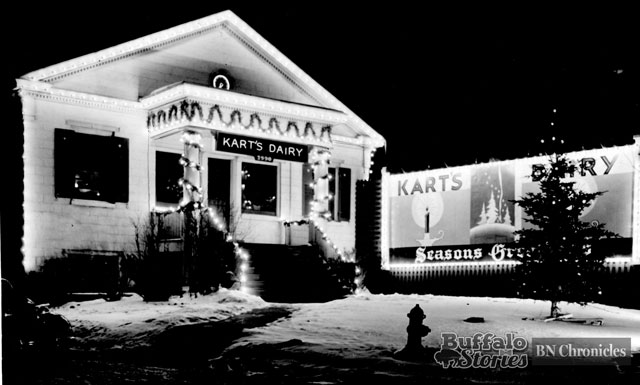 The year this photo was taken, “The White House of Buffalo Dairies” was one of 36 dairies listed as operating in the City of Buffalo. 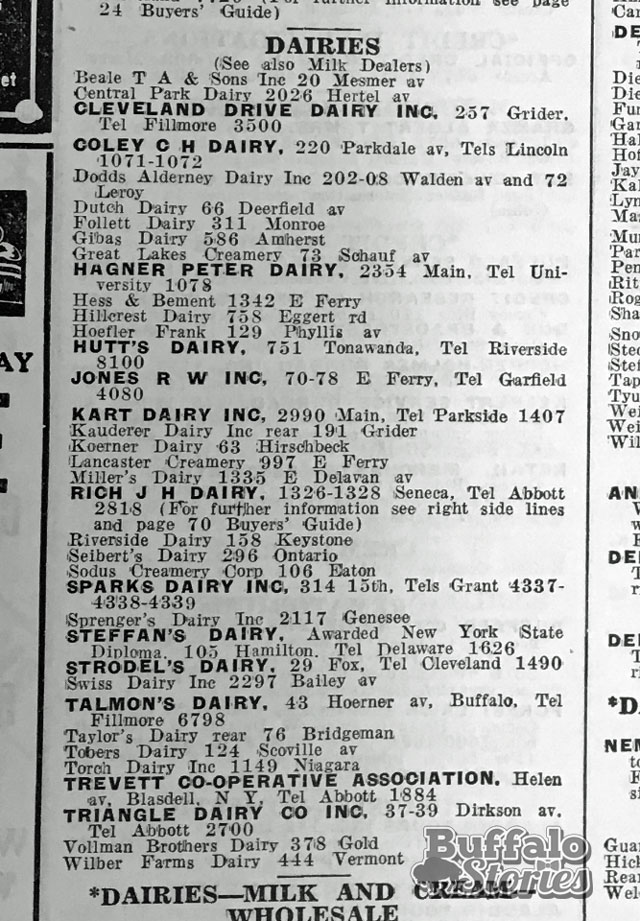 Founded in 1926, Kart’s Dairy was the city’s fifth largest dairy producer when it was bought out by the city’s largest—Jones-Rich—in 1962. Kart’s 30 delivery trucks and $2.6 million in milk sales were moved to Rich’s headquarters on East Ferry Street at the time of the sale.

The building remains, fenced in and a shadow of its former self on Main Street.