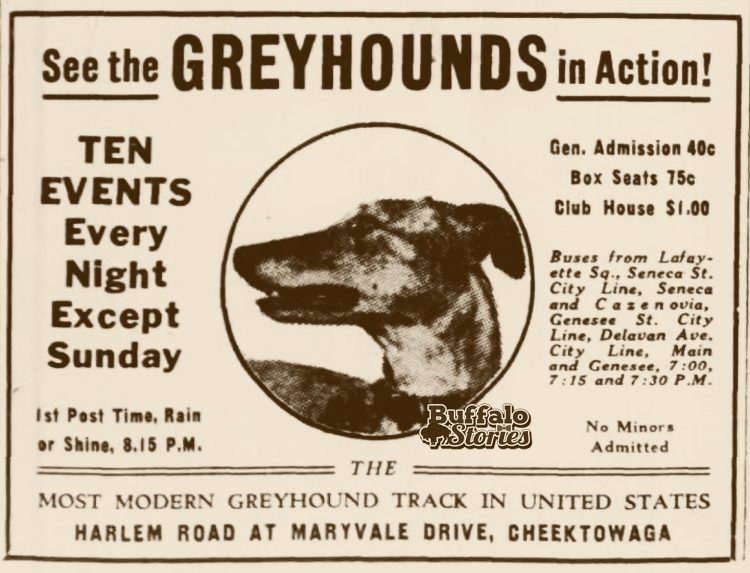 If the newspaper ads were to believed, the greyhound track at Maryvale and Harlem roads in Cheektowaga was “the most modern greyhound track in the United States” when it opened in 1935.

The building of the $100,000 stadium was surrounded by controversy and fears that “illegal betting might flourish in connection with the enterprise.”

Plans called for a concrete and steel  grandstand with a seating capacity of about 4,000, a clubhouse capable of accommodating about a thousand, and a paddock with housing for 88 thoroughbred dogs.

“All roads leading to the place were jammed, and aid from Cheektowaga and State police had to be summoned to keep the lines moving,” reported the Courier-Express. At least 6,000 were there to see the dogs take their first practice run the night before the first race.

In what would now likely be described as the abuse of two different species of animals, The News reported a crowd of more the 12,000 was on hand for “jungle jockey night,” when monkeys rode the greyhounds around the track.

The excitement ground to a halt when, only weeks after opening, the gambling system set up at the track was declared illegal. Later efforts to revive the track couldn’t withstand the betting changes.

The Kensington Expressway cuts through part of the land that was once home to Cheektowaga’s short-lived dog track.