The Mansion House was built on the ground one of Buffalo’s early taverns and hotels. Originally known as Crow’s Tavern, the place was bought by Phillip Landon, an early surveyor of Buffalo, in 1806. 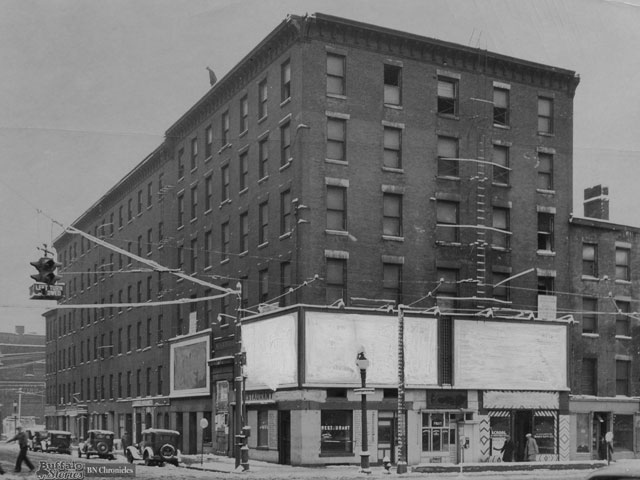 The original tavern was destroyed when the British burned Buffalo in 1813.  Phillip Dorsheimer bought the entire block, and built a five-story building. Another floor was added, and that rebuilt gin mill was styled into a modern hotel by new owner Rebecca Wheeler in 1829.

For the next 100 years, the hotel served Buffalo’s elite arriving first by stage coach, then by canal and then by rail.

“The Mansion House, the career of which abounds in color and historic lore, was host to aristocracy of its day,” wrote The News as the building was slated for demolition in 1932.

The structure was called “one of the most outstanding landmarks in Buffalo’s history” weeks before it was taken down, to make way for buildings to be utilized by the New York Central Railroad.

The New York Central right-of-ways were then sold to New York State for the building of the I-190.

Piers holding up the I-190 now occupy the space once home to Mansion House.