Over the last 115 years, plenty has been written about Buffalo’s Pan American Exposition and all the exciting and interesting events that happened on the grounds — up to and including a presidential assassination.

The map below shows where the exposition took place in the larger City of Buffalo. 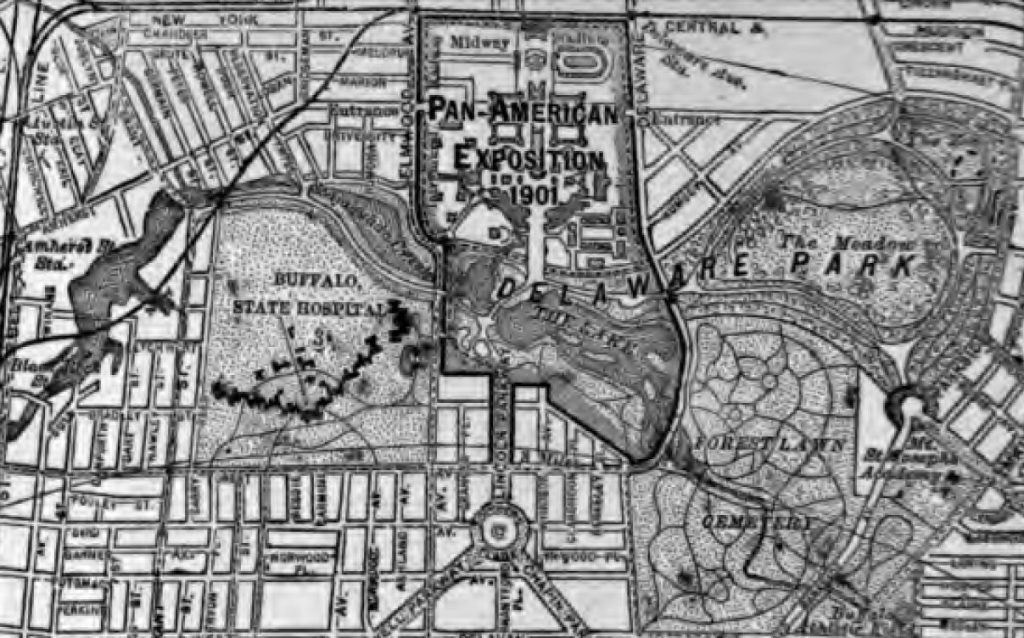 This map shows the specific grounds. 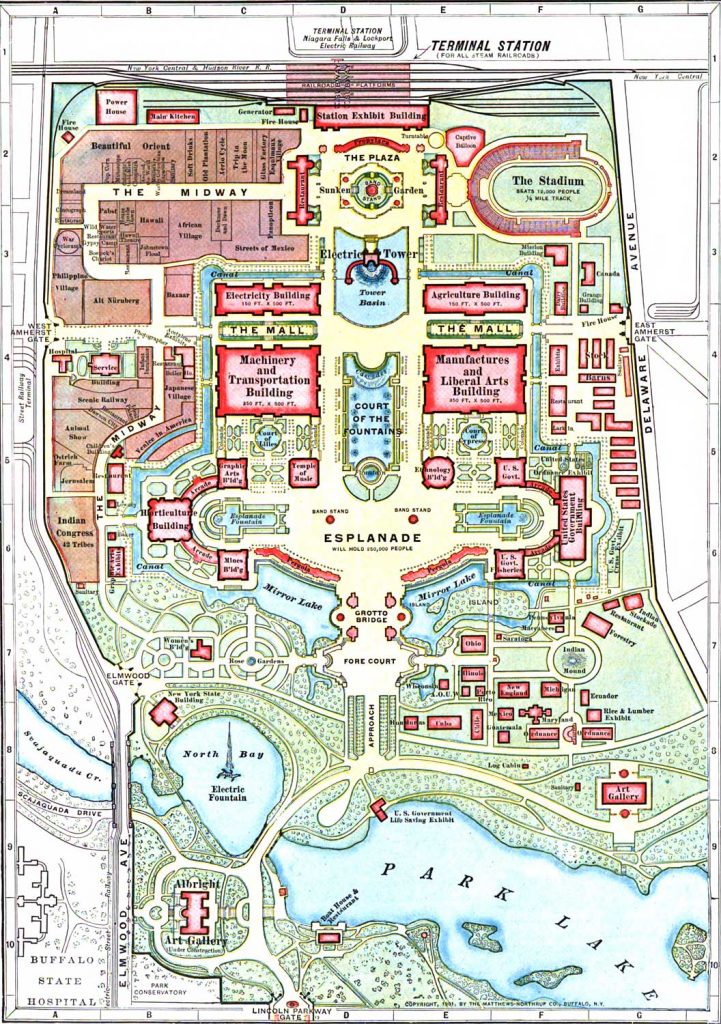 1. The Pan-Am drew plenty of criminals

The transient nature of the crowds coming through Buffalo for the Pan-Am allowed those of lower intentions to blend in with the crush of new people in town. 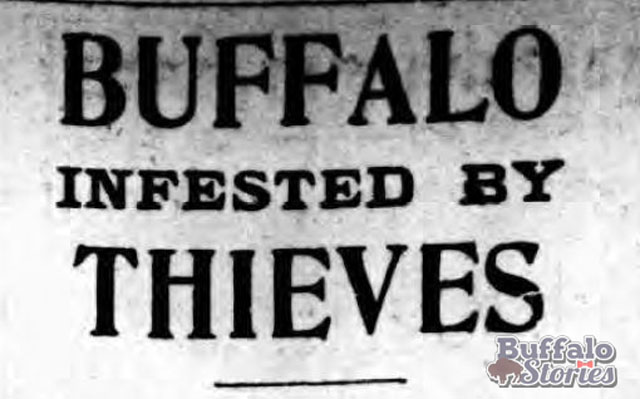 Almost daily, laundry lists of petty crimes and break-ins were written up in the papers. While the thefts of gold-filled watches from the wrists of women on the midway of the Pan-Am were clearly Expo-related, other stories seemed to have strained ties at best to the Pan-Am.

There was a story about the burglar who sat at a piano and played music “so sweet that it would have soothed the most savage beast,” but wound up stealing some clothes and an umbrella from a home on Orange Street.

There was also a mysterious woman in a black dress who was credited with several robberies – the theft of several hundred dollars, as well as, it was assumed, a solid gold watch from the coat pocket of the Expo superintendent. The coat was hanging on a nail in the toilet room of the Canadian Building when the $75 watch was swiped.

It was at the Pan-Am where Buffalo earned the nickname “The City of Light,” but with no thanks to the criminal element. As quickly as crews put up electrical light standards on the Pan-Am grounds through the month of May, souvenir fiends were busy swiping the beautifully globed fixtures.

Those lights were firmly in place for Thomas Edison’s second visit to the Pan-Am in August.

“This is the apotheosis of the incandescent light,” “exclaimed the great Edison as he stood on the Esplanade last night, looking right and left at the overwhelming and dazzling radiance about him.”

While Edison enjoyed the light show, it was the use of another invention – his moving picture camera — that captured forever some of the sights of the Exposition and Buffalo in general.

Edison may have looked with wonder at the lightbulbs, but they were being illuminated by Nikola Tesla’s Niagara Falls Power Station. 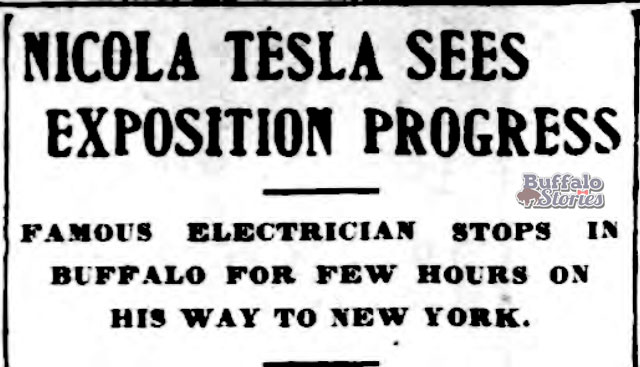 “Mr. Tesla is at work on some of the greatest sensations known to modern electrical science,” wrote the Courier in 1901. “He will endeavor to make good his promise to communicate with the planet Mars.”

According to official guides, to visit all the attractions offered and pay the 50-cent admission to the Pan-Am grounds would have cost about $12 per person. One online inflation calculation says that’s about $323 in 2016 dollars.

Some visitors said it cost them $75 to see the all the sights, which is more than $2,000 in 2016 dollars. While $75 sounds high, it is plausible that some of the less scrupulous independent operators might have tried to charge more than the posted price.

4. On Delaware Avenue, a dining car for ‘ladies and gents’

One of my obsessions with the Pan-Am is finding photos of the area immediately surrounding the Exposition site. At the time, this portion of the city was only very sparsely developed, which is what made it perfect for the mostly temporary structures of the great event.

This diner car stood about where a 7-Eleven now stands on the corner of Delaware and Amherst. 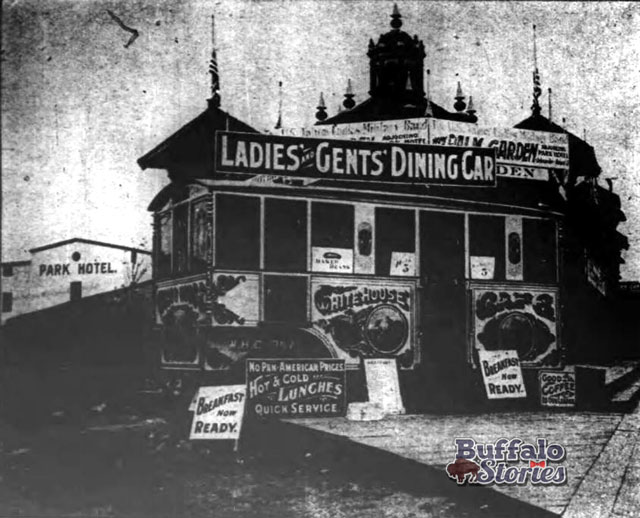 5. Elmwood and Amherst: the most popular trolley stop

The corner of Elmwood and Amherst is now a rather average city corner, with a drug store, bowling alley and gas station.

In 1901, it was the main gate of the Pan-American Exposition. Amherst Street was the Midway between Elmwood and Delaware.

Just south of Amherst Street, on the west side of Elmwood, was the main streetcar exchange for the expo. Most visitors coming from downtown would have taken the streetcar and gotten off here, around the site of McKinley High School. 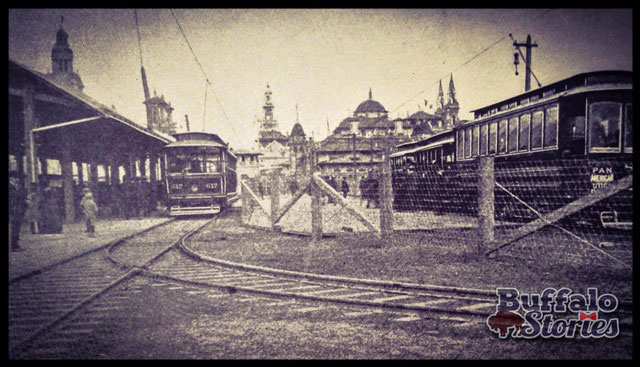 The building has been occupied by Voelker’s Lanes for generations, but during the Pan-Am, the structure at the northwest corner of Elmwood and Amherst was home to one of the city’s more popular hotels: the Alcazar. 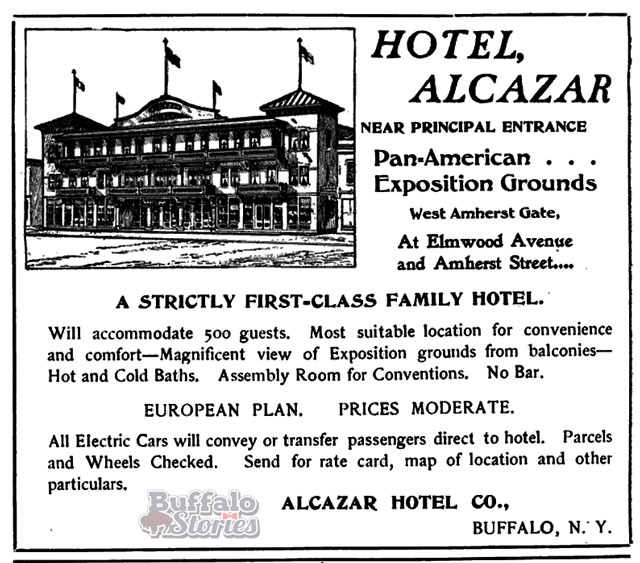 I always try to imagine this view as I’m driving home to Parkside Avenue from Wegman’s: basically, the Pan-Am, looking east from Elmwood and Amherst. 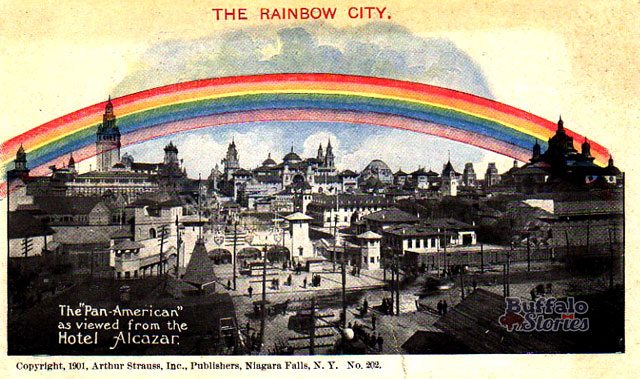 7. A tent city accommodated visitors on a budget

In anticipation of the Pan-Am in early 1901, The News wrote, “Buffalo’s population will soon share the cosmopolitan character of the great metropolitan cities of the world.”

This was true, but not all visitors were “high society.” Many folks who couldn’t afford $2 to spend the night at a nice hotel instead spent $1.50 a night to stay at the tent city built just for the exposition in what is now the Parkside neighborhood. 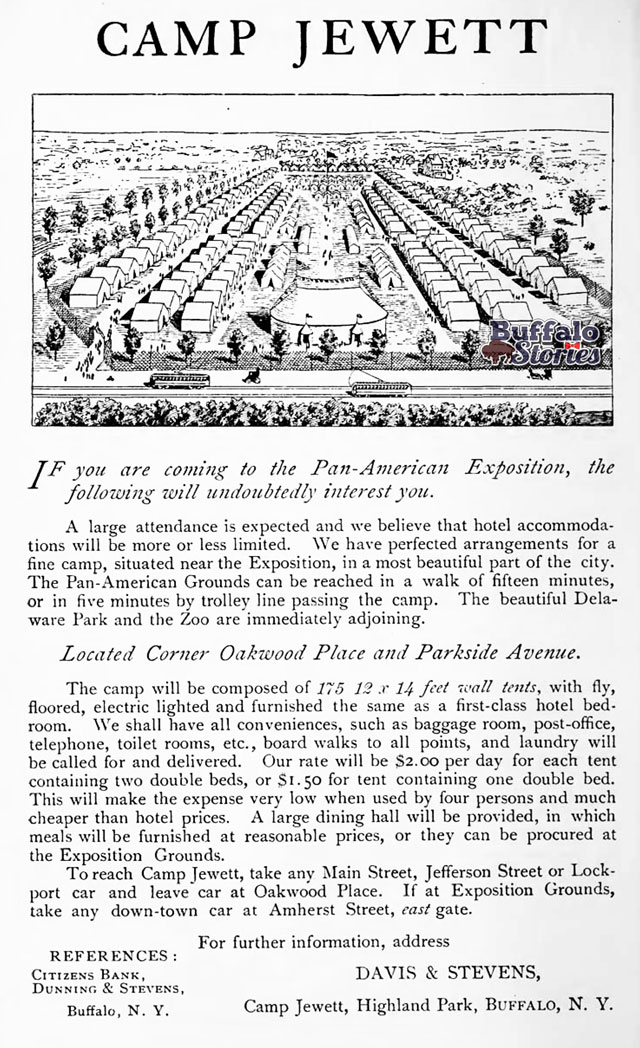 8. Bacardi gets its American start 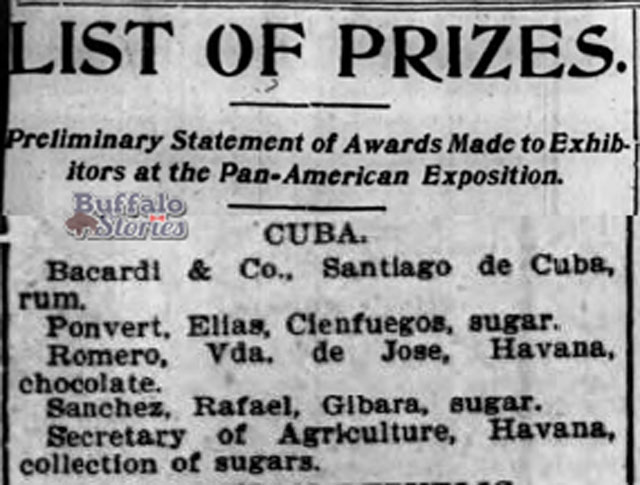 The judges at the Pan-Am did. The now world-renown liquor won its first gold medal in Buffalo, beating out 11 other Cuban rums and starting a run at the top that continues through today.