Few buildings mirror the battered and unlikely history of Buffalo better than Buffalo’s Cyclorama Building at Edward and Pearl.

Within a decade of its construction in 1888, the building was obsolete, becoming a stable, a roller rink and a junk storage warehouse until it was bought by the city and left to sit until condemned. Rebuilt by the out-of-work men of Buffalo during the Depression as part of the Works Progress Administration, the Cyclorama became home to one of the city’s most beloved spaces, the Grosvenor Library.

Again abandoned when the new library opened at Lafayette Square in 1964, Cyclorama sat mostly empty for the next quarter-century.

When Ciminelli Development bought Cyclorama to renovate the nearly century-old structure for its headquarters in 1985, it looked as though Edward and Pearl could have been home to a new parking lot at any time.

Cyclorama’s future was secured when Ciminelli opened its doors in 1989. It was an early testament to smart preservation and reuse, and it became a beacon as downtown Buffalo’s fortunes slowly stopped eroding and, eventually, became a sign of the city’s rebirth and progress.

When the Queen City Cyclorama opened its doors in 1888, Buffalo was a growing city with a bright future and the cyclorama was one of the world’s trendy entertainment vehicles.

When built, the large round building was open in the middle and on the outside walls were hung massive paintings, depicting historical stories.

The first painting snaked around the inside walls of Buffalo’s Cyclorama was “Jerusalem on the Day of The Crucifixion.” The mammoth artwork was 200 feet long, 50 feet high, and weighed five tons — offering those who viewed it an emotional and historical depiction of what the holy city looked like on Christ’s last day. Lifelike figures and objects were added to the foreground to give the scene depth and take the viewer to the place in a way like no other media of the time could.

The cyclorama of Jerusalem attracted crowds of people last week. The gay laughter is hushed and the smile fades from the face of the most worldly spectator when gazing at this wonderful representation which seems to bring the days of the great tragedy terribly near. There all classes mingle — the bright-faced girl who comes from a feeling of curiosity, the artist who regards it from an artistic standpoint, and the grave-faced clergyman who seeks inspiration for his next Sunday’s sermon in the wonderful scenes portrayed. The Bible is to many as a twice-told tale that has lost its first awful significance, but such scenes as this and the remembrance of the patient, suffering, noble face of the man who, in all His majesty, was portrayed in the great picture at the fair standing before Pilate, make it all seem terribly real. 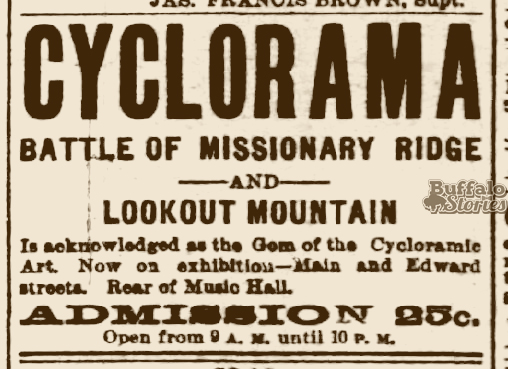 “The Grand Cyclorama” was billed as “Buffalo’s Greatest Attraction,” and that might have been true. Tens of thousands paid 50 cents to gaze upon the detailed artwork, which remained in place for about two years, when it was replaced by a similar installation of the Civil War battle at Missionary Ridge and Lookout Mountain.

Many sources incorrectly state that “The Battle of Gettysburg” was the second exhibition, but as can be seen in the ad at left, it was indeed “Missionary Ridge and Lookout Mountain.”

Sixty years later, people who were children when the war-themed exhibit was on display recalled the “life-size wax figures fought a gory battle with real Army equipment.” 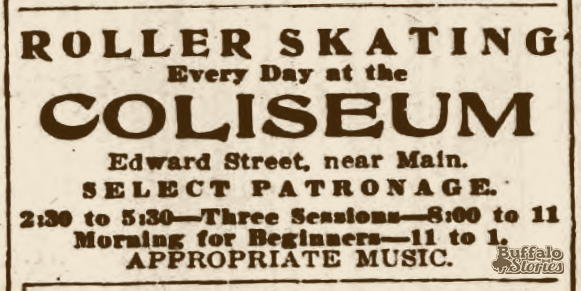 By the end of the two years’ run of the Civil War, the form of entertainment had begun to run its course, and by 1892, the Gurnsey Co. had purchased Cyclorama and was using it as a stable, livery barn and for-hire store house for sleighs and carriages.

In 1906, the old barn was brought to new life with a stripping down to the walls and a complete interior rebuild. The Cyclorama was renamed the Coliseum and marketed as the greatest new roller skating rink in the nation.

“The appropriate music furnished by the large Coliseum band under the direction of J. B. Lampe is one of the pleasing features of the exercise, and makes roller skating one of the most delightful amusements that can be found in the city at this time, ” wrote The Courier about “the society fad” in 1906. As many as 300 skaters filled the floor, with hundreds more watching from the balcony.

The spectators were as important as the skaters, as there was “a splendidly furnished sitting room especially for the ladies and a well-appointed smoking room for the gentleman.”

As the Coliseum, the Cyclorama Building was also home to a unique, extremely popular but short-lived sport, “Basketball on Roller Skates.”

The fortunes of the Coliseum were altogether short-lived, and the facility reverted back to a garage and headquarters for Buffalo Taxi Cab, which remained a tenant in the building even after the city bought it for the use of the Grosvenor Library. 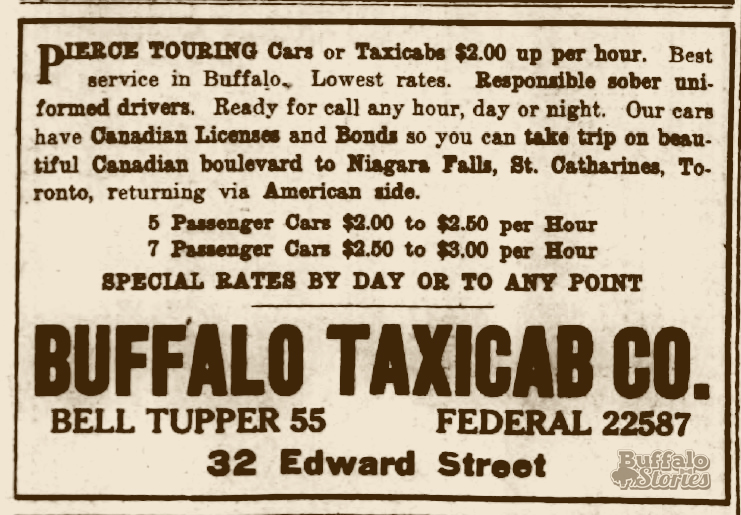 Buffalo Taxi Cab used only Buffalo-built, high-end Pierce automobiles in its fleet, which means the cars stored at Cyclorama in the 1910s were built at Elmwood and Great Arrow at the Pierce-Arrow factory.

The City of Buffalo bought the building for the use of the Grosvenor Library in 1913, but it instead continued to rent space to a series of taxicab companies.

In 1937, the building was condemned — but a year later, it was selected by the Works Progress Administration as rehab project for the unemployed men of Buffalo. At least 84 laborers and skilled craftsmen worked on the building during the first winter of work, when the structure was stabilized.

WPA workmen have begun the task of transforming the interior of the old Cyclorama Building in Edward Street from a gloomy garage into a brightly lighted, properly ventilated addition to the Grosvenor Library, in which will be stored priceless books, records and research catalogues in neatly arranged shelves.

Work took four years, but the results were a building that became a landmark that generations of Buffalonians warmly remember.

The large, rotund building in Edward Street, which in its 53 years has housed a cyclorama, a skating rink, a stable and a garage, today was opened as the Grosvenor Library’s magnificent modern reading room.

Vaunted as one of the most unusual library rooms in the country, it is circular, with high leaded windows and the latest designed fluorescent lighting that provides daylight illumination at all times …

The reading room, which is entered through a ramp from the Grosvenor’s main building, is 125 feet in diameter and about 400 feet in circumference. Actually it is 16-sided. The bookcases, of gumwood, are fitted into 13 sides and these, with a few other shelves placed in the room, open to the public a reference collection of 6000 volumes and a seating capacity of 242.

“If it cannot be sold because of legal restrictions, or if there is no buyer, the county will either board up the building or have it razed,” said County Public Works Commissioner H. Dale Bossert in 1963.

Today, the future of the Cyclorama seems secure, with its prime location amid the Theater District and Chippewa District, the renewal along Delaware Avenue and the expanding footprint of the Medical Campus.

The history-rich building that you might not notice driving by — unless you were looking for it — has been the home of accounting firm Lumsden McCormick since September 2012.