In the dark back room at a Radio Station in Buffalo, New York, Steve Cichon, the producer of the Mike Schopp Show, found a dusty box of tapes labeled “Dom–Karaoke.” After viewing a few tapes, it was obvious that these tapes were, indeed, of Dom doing karaoke. As the “curator” of the Haseoke Archive, Steve chose a tape to play each day on Mike’s show. 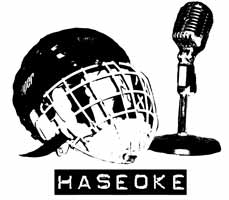 Buffalo, NY – Today is a day about legacy.

Dominik Hasek, arguably (should read CLEARLY) the most talented man ever to don a Sabres sweater, will see his number -39- hoisted into the rafters of the First Niagara Center this evening. (Most Talented Sabre and Greatest Sabre are two different ideas, but I’ll save that for another day.)

Hasek’s career in Buffalo and my career in radio started at about the same time. As a teenaged radio producer, I was at Sabres morning skates when John Muckler was being asked about Grant Fuhr or Hasek starting.

By the end of the ’90s, when the Sabres were making deep playoff runs, I was a semi-regular at game day skates and in the post-game dressing room first for WBEN, then for Channel 4.

It could get pretty emotional after a big game. When the Sabres lost the 1998 Eastern conference Finals in Game 6 to the Washington Capitals, I walked into the room just as Rob Ray punched out the glass door of a convenience-store-style drink cooler/fridge. Donald Audette sat in his locker stall, jersey off, pads on, sobbing uncontrollably.

One of the great things about that team was their emotional investment. It takes magic to win in sports, and that Sabres team had it. They had that intangible something– everyone feeding off of one another, all on the same page with the same goals.

Creating and fostering that magic is the fleeting task that every coach and front office tries to accomplish in athletics. It’s that rare and impossible-to-predict atmosphere that is the most difficult part in creating a successful team. Finding talented players is the relatively easy part.

Watching it up close, there were little signs. Literally. Like the one in Hasek’s dressing room stall which read like something a third grader would post on his bedroom door. “DO NOT TOUCH EVER” said the sticker above a pair of nail clippers hanging on the wall near Dom’s pads. It’s unclear whether actual tomfoolery or just the active prevention of tomfoolery precipitated the sign, but it wasn’t really in line with the aura of boyish fun surrounding that team.

By 1999, I was a TV sports producer on the Stanley Cup beat. My job was to watch morning practice, and get in the lockerroom and ask the questions that sports reporters ask. Hasek was one of the “must talk to” players. His “treatments” right after practice usually meant he wouldn’t speak in a press conference, which meant 20-30 reporters, producers, and cameramen surrounding Hasek’s stall waiting for him to come out. His “20 minute treatments” would sometimes take more than an hour, but the whole gaggle had to be ready. Dom wouldn’t wait for people to get into position. Sometimes, he wouldn’t speak for more that a minute or two. If you weren’t ready, you missed it.

I have always done impressions. By this point, you could have heard me on the radio doing “Johnnie the old tyme hockey guy” (who suspiciously sounded like John Muckler), Gary Bettman, and John Butler.

Sometimes spending a half hour on one knee waiting for Hasek to come out, I can clearly remember doing quiet Hasek impressions– lips pressed close to the microphone I was holding ready for Hasek. I was just loud enough so that the videographers I was working with, usually Jeff Helmick or Scott Swenson, could hear it in their earpieces but no one else could.

Those impressions continued in the car and back at the station, and often involved a liberal sprinkling of classic Hasek terms like “groin”, “butterfly” (the sprawling move which he had a hard time doing because of his groin injury), and “I nono”, which is how it sounded when he started most sentences with a negative headshake and the words “I don’t know.” 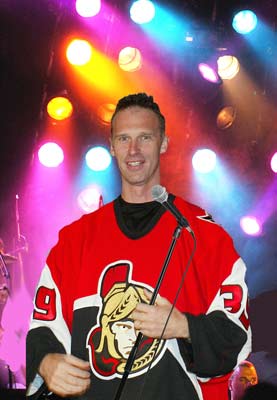 A few years later, impression refined, I was working at WNSA Radio and The Empire Sports Network producing the Mike Schopp Show. Our stations were owned by Rigas Family, who also owned the Sabres. Once, we were supposed to have a St. Louis Cardinals beat writer on, and he stiffed. On the air, Mike asked if Dom could come on and talk about the Cardinals, so only identified as “Dom,” I did the interview with Mike. I knew very little about the Cardinals, which made it even better.

Hasek was still a Sabre at this point, and Mike and I were told to never have “Dom” on the show again. But as luck would have it, he was soon traded, and the ban was lifted. Mike had the lyrics of “Lady Marmalade,” the LaBelle classic which was enjoying a resurgence with a Christina Aguilera cover on the charts.

“What would it sound like if ‘Dom’ was doing karaoke and sang ‘Lady Marmalade,'” asked Schopp. “That would be like ‘Haseoke,'” said program drector and sports update guy Chris Atkins. Haseoke was born.

I’d produce a “Haseoke” clip for Sabres game days, first with Schopp, then Howard Simon. As “the curator of the Haseoke archive,” I would help introduce whichever clip I had “found” that day. When I left WNSA and moved over to Entercom, Haseoke appeared again regularly with Schopp and The Bulldog on WGR. In the beginning, they were mostly just “Dom” trying to sing and doing a poor job of it. As it evolved, “Dom” started to fill his songs with hate for the Sabres, and would often sing a song where the lyrics could be bent into cheering for whoever the Sabres were playing against.

Once Hasek retired, new Haseoke songs would only pop up when Hasek was in the news for something.

In truth, Haseoke was born of my frustration and dislike for Hasek as a guy. He might have played up an injury because he hated the coach. He roughed up my good pal, the late hockey writing legend Jim Kelley. He was arrogant. He made me wait on one arthritic knee just because he could and he wanted to eff with reporters.

I know I wasn’t alone in my feelings. I once had a brief, smiling conversation with Darcy Regier about Haseoke. He started it, and he )was smiling. While Marty Biron was the Sabres starting goalie, I talked as Dom with Biron– LIVE on the air– and told him how terrible he was and the Sabres were. Marty loved it.

That was then. I’m far more removed now, but I’m glad to see that Hasek appears to be a bit more level-headed and even likable these days. Even if they were both faking it, was nice to see Hasek and Ted Nolan enjoying a conversation together earlier this hockey season. Hasek of 15 years ago couldn’t have been bothered to fake such a thing.

The fact he seems a bit more humble and likeable has let the steam out of my desire to “curate” any new Haseoke tapes. But as I wrote to open this piece, today is about legacy.

As Hasek is justly being remembered as worthy of having his number retired, I might be remembered for this. I know for many Buffalo sports talk show fans, I’ll forever be linked with Dom. In fact, over a 20 year broadcasting career, despite covering Hurricane Katrina and plane crashes and big trials and big snow & ice storms and winning awards for reporting and journalism, Haseoke might be the only thing I’m remembered for, if anything at all.

If my legacy is making people smile…. I no-no… I’m happy for it.