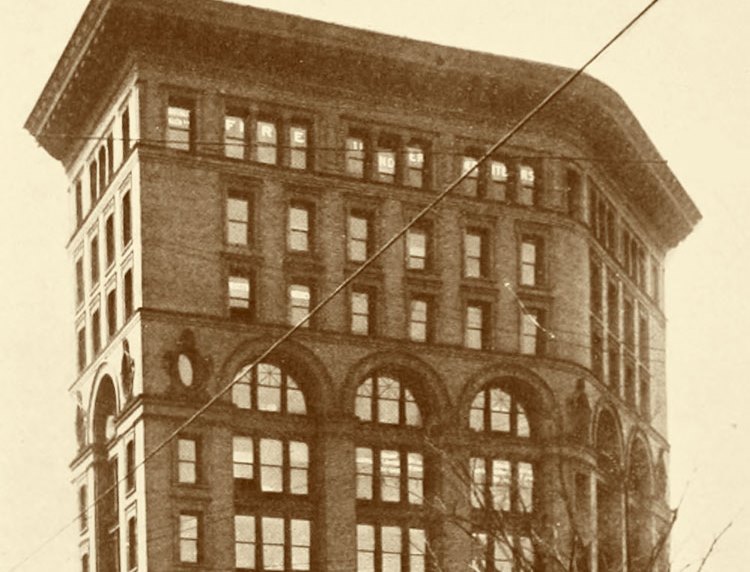 In 1892, Buffalo’s skyline was filled with church steeples and old city hall — the building we now call old County Hall on Franklin Street. Those structures weren’t yet competing with office towers and apartment buildings for airspace above the city.

Having been in Buffalo for about five years, M.F. Wright, manager for the Union Central Life Insurance Company, put together a proposal for Buffalo’s first high-rise.

“Now my proposition is this: If the citizens of Buffalo will take insurance in the Union Central Life for an amount that will justify the undertaking, I propose to cause to be erected a fire-proof building eight stories high, which when completed will be worth, with the ground, not less than $150,000. It will be an office building, and perfect in every particular, of course to be known as the Union Central Life Building. I have a contract, signed, sealed, and delivered, that as soon as the necessary amount of insurance is subscribed for the structure will be begun, and pushed to completion.”

By the spring of 1893, Green & Wicks architects were accepting construction bids on what had become a 10-story design made of granite, steel and terra cotta at the corner of Pearl and Swan. The expected cost was $175,000. 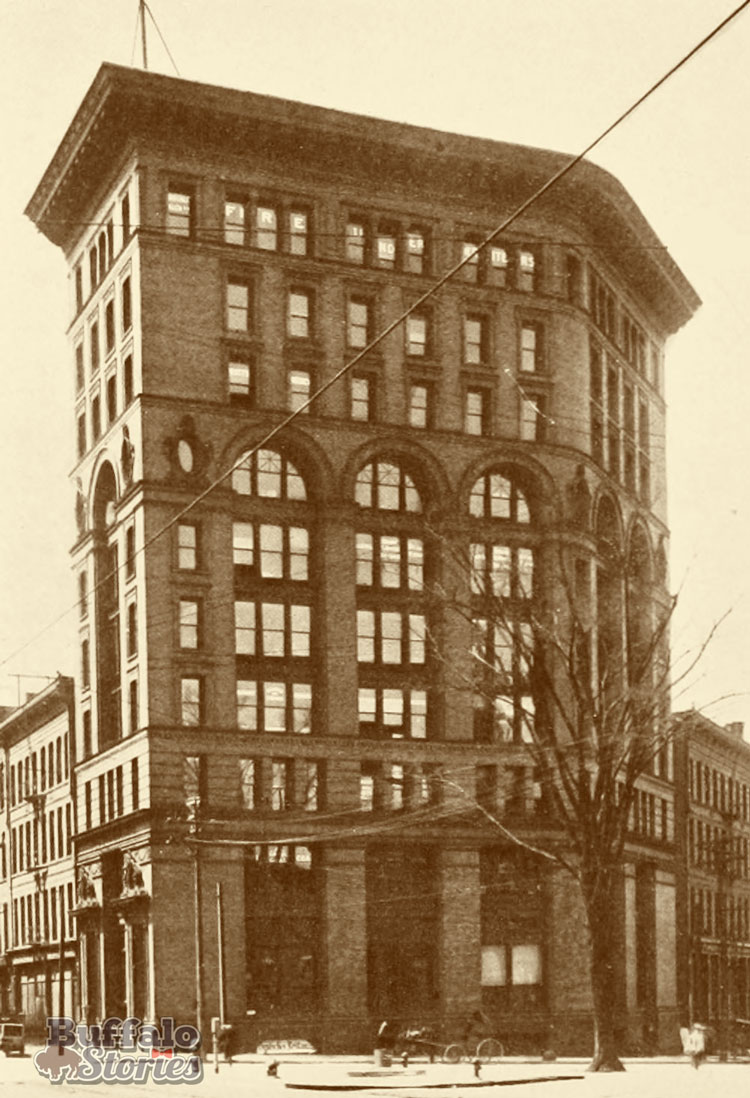 The building of Buffalo’s first high-rise was carefully followed in the press.

It will be a 10-story structure, all of ornamental fireproof construction, and will be about 140 feet high. It will have a base of Medina sandstone, the body of the building to be of light colored brick. The doorways will be of terra cotta to match the sandstone base. The effect will be very pleasing. Steel construction will be the rule throughout. The floors will be of steel beams and brick arches, with proper woodwork. The halls will all be of marble mosaic. The basement of the building will be used as a restaurant, which will have independent entrances, as well as approaches from the building itself. The boilers, engines, and dynamo for electric lighting will be under the sidewalk. The first floor will be the Union Central Life office. Above this will be nine floors of eight offices each. The entrance hall proper will be all marble. The roof will be flat and asphalted.

Even the digging and building of “the best and most elaborate foundation in the city” received glowing press. 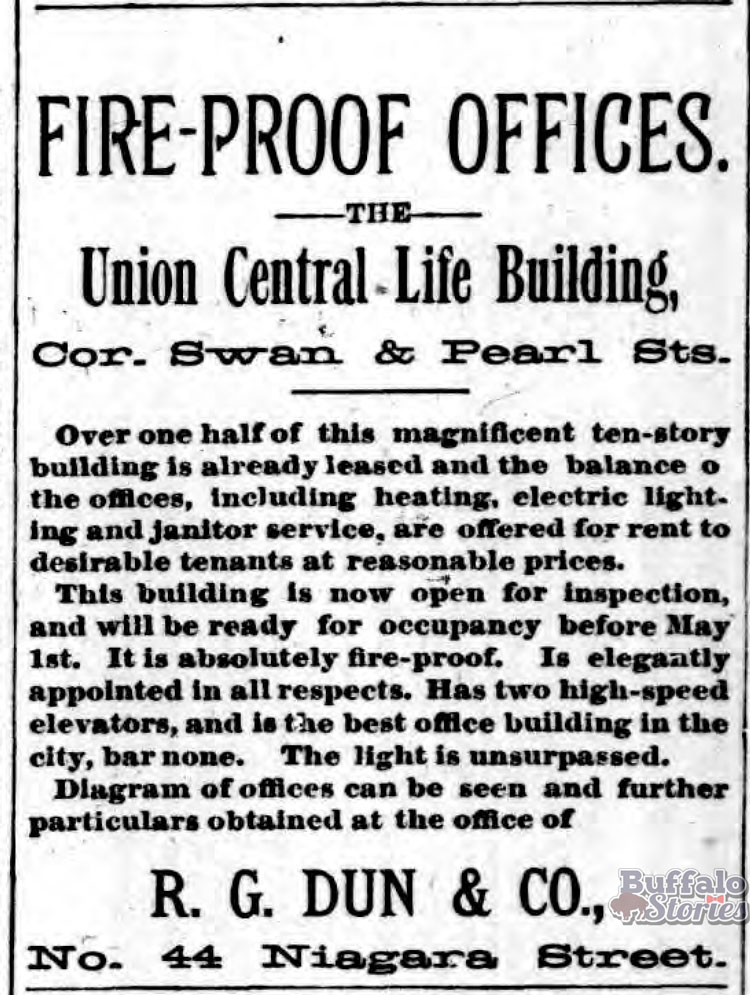 Perhaps caught up in the excitement of it all, Union Central Life’s Wright also became involved in building speculation at another site downtown, and was unable to make payments on the larger structure’s bonds. R.W. Dun & Company swept in, paying the bills on the nearly completed building and putting its own name on it in the process.

Among the first tenants of the Dun was the US Weather Bureau, which was first organized by Buffalo native Gen. Albert J. Myer 25 years earlier.

The Dun Building may have been Buffalo’s first high-rise building, but excitement waned as it was the first of many. Just as construction was wrapping up at Pearl, Swan and Erie, the structure of the Morgan Building at Niagara and Pearl was already 12 stories high, and the eight-story Brisbane building was going up at Main and Clinton as well. 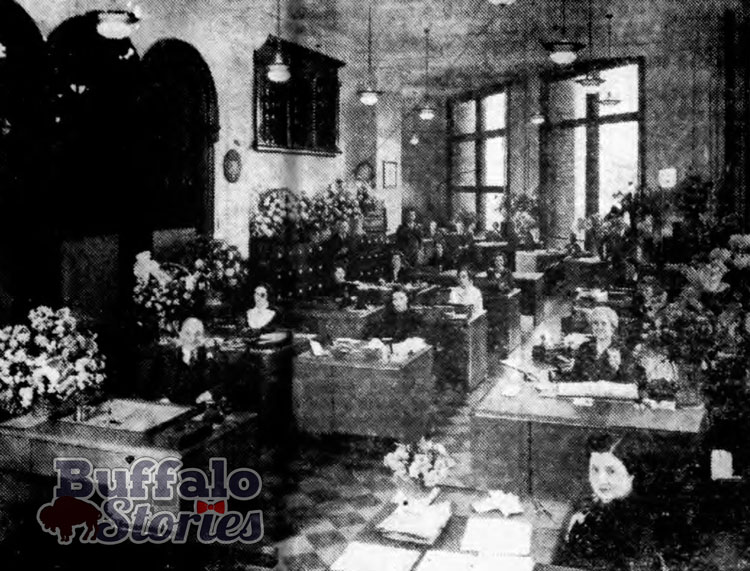 It’s not the best image, but the unusual angles of the Dun Building are evident in this 1913 photo. (Buffalo Stories archives)

But “the hope of the average Buffalonian” hinged on an almost unimaginable building that would “occupy a whole square block in the very heart of the city,” at a point where all the streetcar lines converged. The Ellicott Square Building was the world’s largest office building when it was completed with much fanfare in 1896.

“Buffalo was in a building boom, started with the Dun Building, and crowned with Ellicott Square,” wrote The Buffalo Courier in 1895:

“When this block is built the fame of Buffalo will thereby be heralded from the Atlantic to the Pacific. It will be a monument befitting the city which shall be known as the great electrical center of the globe.”

As Buffalo’s eyes were going up, they were also going back. The construction boom made historically minded Buffalonians scramble to codify quickly vanishing vestiges of Buffalo’s past. In 1902, a wall of the Dun Building became the site of one of the city’s first historical markers, marking the spot as where Buffalo’s first schoolhouse stood — before it was burned during the War of 1812. 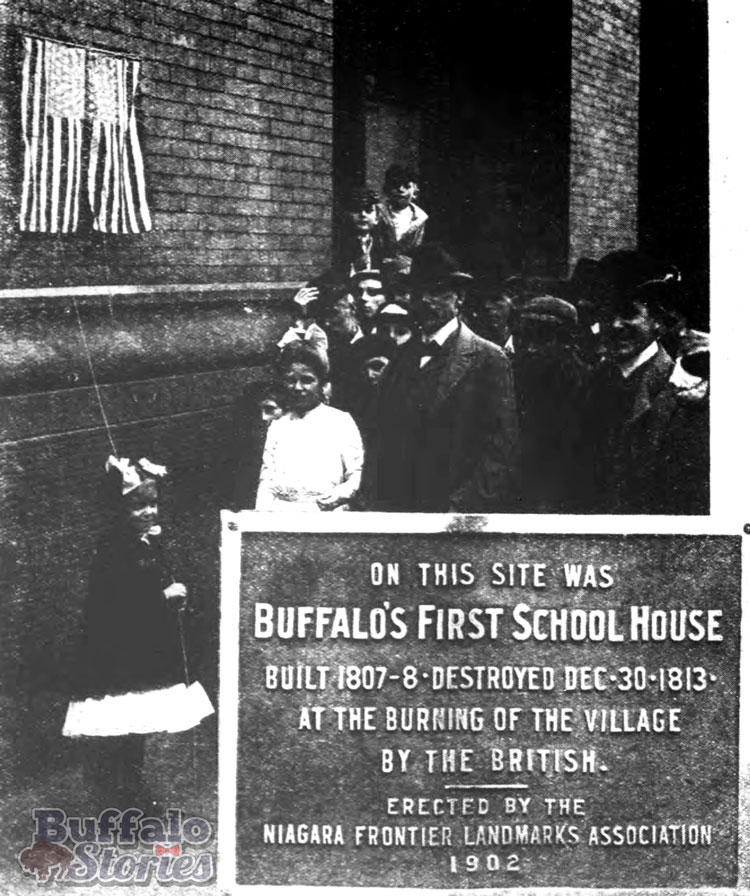