This is another in a series looking back at an illustrated map of Buffalo from 1880 and examines how the features on that map have — or haven’t — changed over 138 years.

Most of the major streets through Buffalo haven’t changed too much since the 1880 map of Buffalo was printed about 140 years ago. One major exception is Elmwood Avenue.

In 1880, on paper Elmwood ran from North Street to the Beltline Railroad tracks just after Amherst Street. But that Elmwood was a series of smaller streets connected together as the city grew — it wasn’t a planned thoroughfare like Delaware Avenue or Main Street. It also didn’t extend all the way downtown.

For decades, there was talk of extending Elmwood to Niagara Square and widening the older parts of the street to make it the equal of Delaware or Main for north-south travel in the city.

Parts of the northernmost stretch were improved as a part of the Pan-American Exposition, but still, Elmwood only ran between Amherst and Allen streets.

The new part of Elmwood Avenue would cut through beautiful property of the Rumsey family, which was adjacent to Johnson Park. Crews worked for more than a decade to connect Niagara Square with growing suburban Kenmore.

Scarce few landmarks on the 1880 map are recognizable in today’s Buffalo. 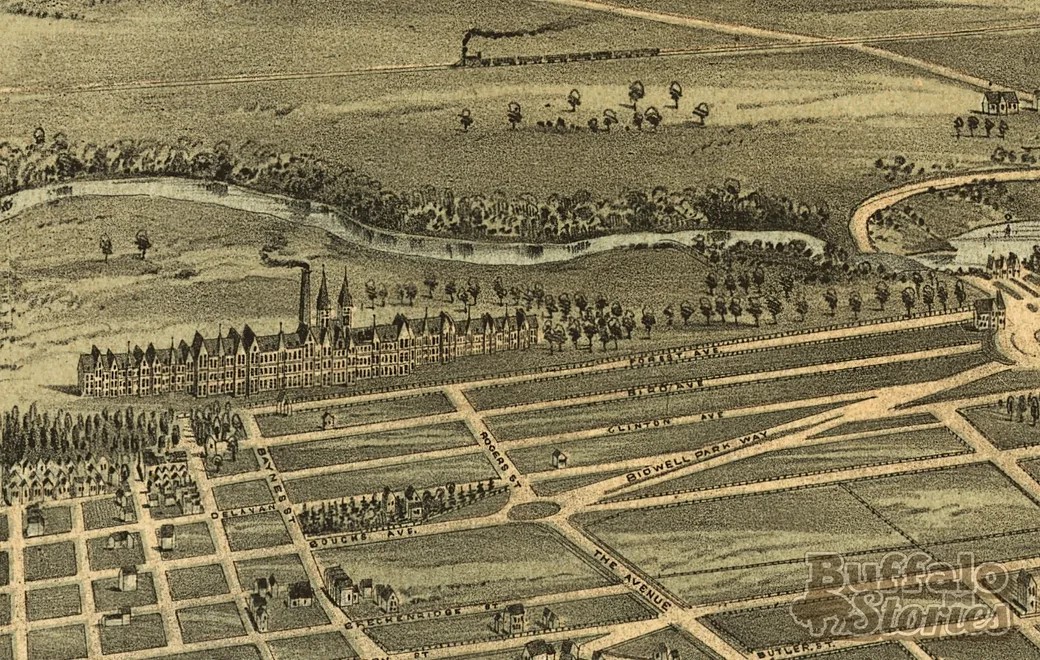 We no longer call it the Buffalo State Asylum for the Insane, and it’s no longer alone in the most rural outstretch of the city before Elmwood Avenue extended that far north, but H.H. Richardson’s Romanesque Medina sandstone masterpiece remains one of Western New York’s most identifiable landmarks.

Until the $102 million in renovations that made the opening of the Hotel Henry possible, it seemed that for nearly 150 years, no matter what was happening at the rambling series of buildings — whether it was cutting-edge and humanitarian treatment of the mentally ill or attempts to preserve the history of the architectural treasure — was chronically underfunded.

An early visit from a state official, in a August 1885 article in the Buffalo Courier, gave the Forest Avenue facility top marks for the care that was provided.

Dr. Andrews is often more anxious to get rid of a patient than anybody else can be, and it is his interest as it is that of a private practitioner to have as many recoveries as possible.

Patients whom the superintendent deems to have recovered, or those who are incurable, are discharged under bonds.

The asylum statistics show a very large percentage of recoveries in the course of a year.  Dr. Andrews is, moreover, a good Christian man of broad sympathies, whose heart is in the work, and along with his staff makes a constant study of the welfare of every patient.

The Buffalo State Insane Asylum is one of the best managed and best adapted institutions for the treatment of the insane that I have ever visited.

More than 100 years later, News Critic Anthony Bannon was using the pages of Gusto to ask the question of whether the sprawling building could be saved from the ravages of decay.

By 1983, patients hadn’t roamed the halls of the complex in a decade, and though place was still a state-owned facility, it was suffering from neglect and disrepair.

Although support from each level of government is possible, the buildings are owned by the state and the state must bear final responsibility, (said preservationist John Phelan).

The greatest danger is a lack of commitment, a loss of energy, Phelan observed. “Much of what has been lost, many of our buildings, have been lost because of a lack of energy to preserve them. It is an attrition process that goes on inevitably.”

“If the community doesn’t generate positive energy, it is as great a danger (to a building) as the freeze-thaw cycle.” In this instance, though, Phelan “assumes that all parties will work in good faith to find a solution.” I regard these buildings as world class building in the community, for which it would be incomprehensible that the things necessary for their preservation would not be accomplished for our future.”

Part of that future was realized and secured with the 2017 opening of the Hotel Henry inside the Richardson complex, but that’s not the end of the story.

“We are ecstatic about the position we are in,” Paul Hojnacki, president of the Richardson Center Corp., told News reporter Mark Sommer weeks before the Henry opened. “Because we are doing about a third of the complex, we have a lot of work left ahead of us. It’s going to be a real challenge.” 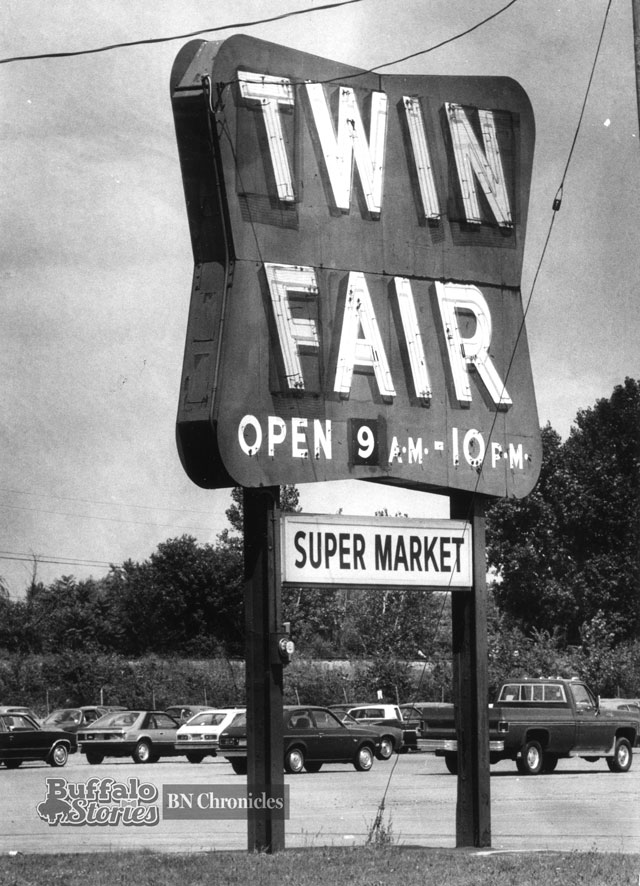 M&T Bank had been keeping Buffalo’s money safe for 24 years by the time The News started its daily editions, but in 1980 the bank was solidly in growth mode — including in the Elmwood Village.

The bank’s new “Elmwood Plaza” office offered state-of-the-art bank technology as well as what they called a “mini-park.”

It’s easy to laugh at the idea of a mini-park — especially since the same bench and trees on concrete slab stand there today. But in 1980, the idea that a tree might be planted in a spot “where a car could park” likely seemed pretty radical.

After camping out near Elmwood and the city line in three canvas-covered wagons, 110 years ago today– July 7, 1910– “a band of gypsies” with 13 children, “10 monkeys, seven horses, and three bears” were escorted out of Buffalo by two mounted policemen. 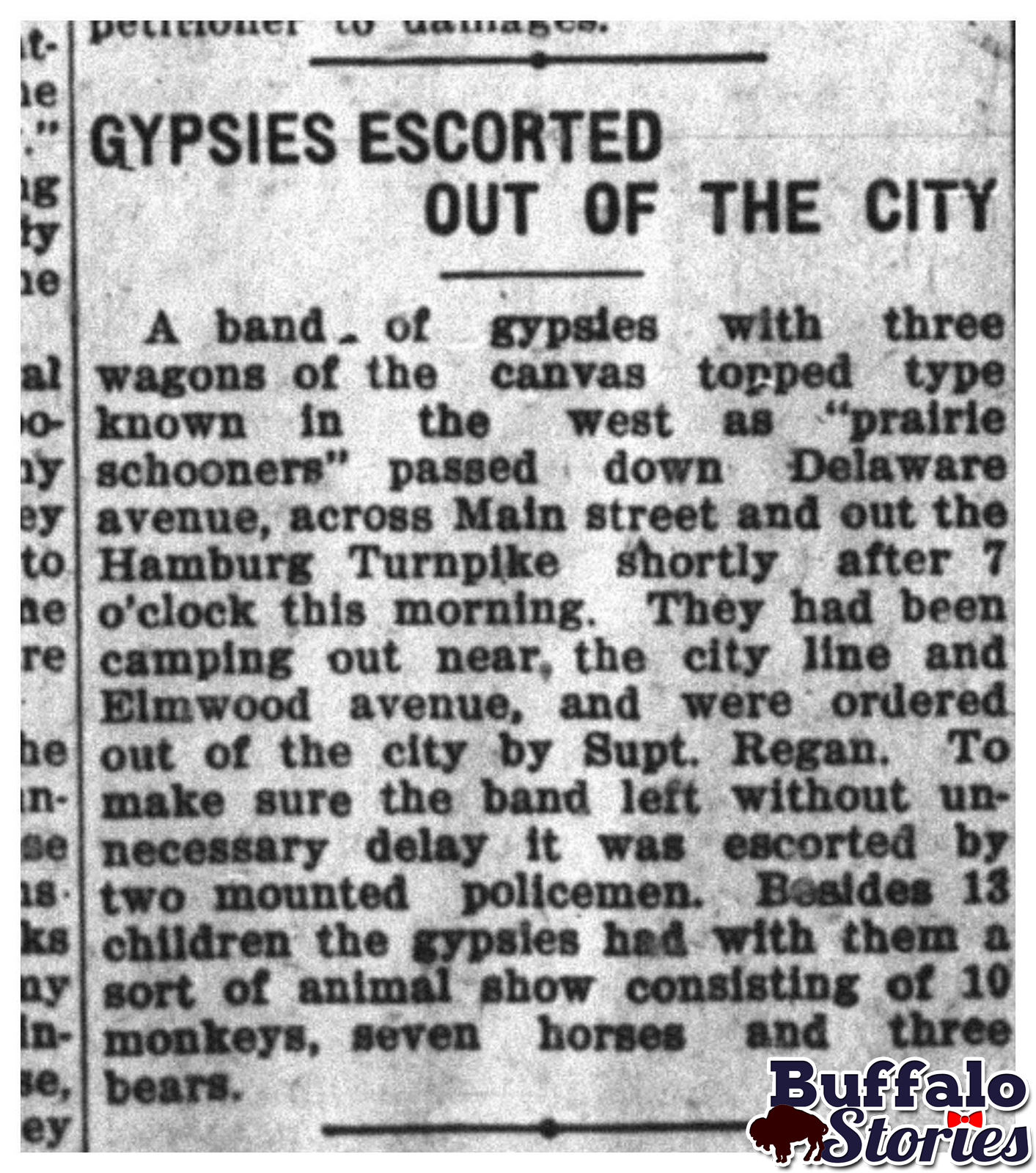