Any of us who have spent time away from Buffalo have our rituals when we return to Western New York. Loganberry. Wings. Super Mighty. Hot dogs (Texas hots). Hot dogs (Char-broiled). Hot dogs (so long as it’s a Sahlens). 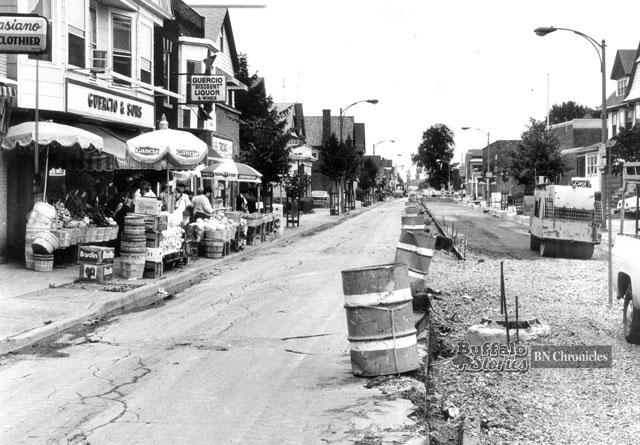 Aside from — you know — seeing mom, many of our immediate “musts” revolve around food. One stop for many who grew up in or have roots on Buffalo’s West Side, one stop combines food and family.

The mention of Guercio’s can fill a West Sider with a yearning for the pungent aromas of cheese and pickles and cured meats. It’s the type of old-world store which barely exists anymore, making a visit to Grant Street special whether you’re coming from Amherst or the Carolinas.

Guercio’s was known as the Grant Street Market in the days before Vincent and Nancy Guercio came to Buffalo from Sicily in 1954. They bought the place in 1961, and in 1967, the name was officially changed to Guercio & Sons.

From the fruit and vegetables displayed on the sidewalk to the cheese and meat counter inside, Guercio’s is a throwback without feeling like an anachronism. Even if you’ve never been there before, somehow walking in, it feels like it’s already etched in your DNA. It’s one of those places you can take your grandkids to.

While it’s the nonnas and bambinos who are mostly likely to wax poetic about Guerico & Sons, it’s the newer Buffalonians hailing from Africa, Asia and Latin America who make up more and more of the everyday neighborhood shoppers there. This is the wonderful little store for current West Siders, just like it was for a previous generation or two.

Neither Grant Street nor the entire West Side have too many institutions that help bridge the gap between yesterday’s West Side and today’s West Side. At Guerico’s, there really hasn’t been a yesterday and today, just a long-standing commitment to being the kind of place that feels right for anyone who walks in.