There’s something about the old days. I know, news flash, right?

But really, upon examination, they really weren’t all that better than today. Unless you are a miserable Luddite, i.e., someone who hates or fears technology, living is easier now than ever before. Easier isn’t necessarily better, but when virtually everything (except ‘getting away from it all’) is easier, it’s got to be better on the whole.

Still, even the worn-in feeling and familiarity of even the most uncomfortable things of our past bring us some level of comfort, especially when the going gets a little rough.

Today, I had a type of day which has been rare for me in adulthood; a sick day where I wasn’t bed bound or just too nauseous or pained to really want to do anything.

It was supposed to be a vacation day, but I have a lousy cold. The kind of day that wouldn’t normally stop me from going to work, but not a day where I’d get much more than the bare minimum done, between filling up the tea cup, blowing my nose, and generally feeling a little beat up and a little run down.

But instead of putting in a solid ‘C+’ day down in the salt mine, I sat at home with all sorts of great plans for the day.

Those plans just weren’t to be. With my sinuses feeling like they’re filled silly putty and the rest of my head slogging around like wet cotton balls, well, the cold just took the sails out of my wind. I think. When you’re not sure, without deep thought whether you’re saying it right, or quoting former Bills Head Coach and King of the Malaprop Hank Bullough, it’s time for a rest.

Home alone, and too sick to do anything good, but well enough to want to do something. Just try to remember that euphoric feeling after the bus went by, and you were assured a day home from school.

That’s really about where I was this morning. Not being one to ‘bang in’ unless there is death, vomiting, or no voice (important for me!) in the forecast, I go to work, so I’m left to think about sick days as a little twerp, and immediately it’s a thought that brings comfort between anticipated sneezes that never come.

After a nice bath ( who has time for a bath anymore!), I made a can of soup on the stovetop. Normally, the thought of all that salt is enough to raise my blood pressure, but not today. It’s incredible to me, but even that awful processed single piece of ‘chicken meat’ in the can took me back to a simpler time.

And I used the stove top for the tea kettle, too. We didn’t have a microwave until my teen years. I can survive waiting more than exactly 2 minutes and 29 seconds (I stop it before the beeps) for water for my tea. 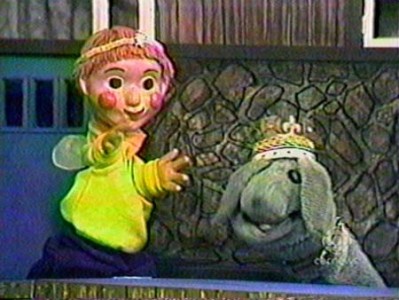 While I hadn’t planned it to be like that, I was thinking about now, and how nice, how comforting it would be to run through the sick day staple TV lineup. For me, it started with Jerome and Rusty on ‘The Friendly Giant,’ and then Casey, Finnegan, and the Tickle trunk on Mr.Dressup on CBC.

Then Bob Barker, Johnny Olson, Janice, Dian, and the beautiful Holly on the ‘Price is Right’ on Channel 4, before a quick switch to Channel 2 at noon for the Flintstones.

Of course, the Price is Right remains, but to me in name only. When grandmas would wear homemade t-shirts because they’d been watching Bob since he was on Truth or Consequences, and then would jump for excitement when they win a new washing machine, that was real.

Hipsters wearing too-tight t-shirts they paid to have made at a kiosk in the mall, who feign excitement because it’s ironic that they win a washing machine because they don’t bathe; that just doesn’t do it for me.

But, then there’s YouTube. Technology of today, soothing my fever induced nostalgia.

I watched ‘The Friendly Giant,’ and didn’t have to fight with my brother over who was going to get to sit in the rocking chair if we ever went to visit the Friendly Giant.

I also got to watch Mr. Dressup make a pretend clarinet out of a paper towel tube, and I got to listen back a few times to my favorite Mr. Dressup sounds: his scissors and his markers. The only way I could have had a better childhood is if my scissors made that crisp a noise as they cut, and my markers that fantastic a whine as they whizzed across the paper.

I also got a good helping of the original ‘Come on Down!!’ man Johnny Olson, and Bob Barker with a mahogany colored head.

As always, the past is a nice place to visit, but one really shouldn’t live there. It’s dishonest to live there. It’s our amazing present, with YouTube on smart phones that helps make it happen.

But still, its really amazing how rubbery chicken bits and decades old video of Canadian puppets, and the memories they rekindle can make a lousy day a little less so.

It’s too bad. I really would have enjoyed today if I wasn’t sick.