Today my ol’man would have been 60 years old. I miss him, but he’s really not that far away… He fills my heart and my brain.

For example, were he around today, it would’ve gone like this: We’d walk in the door, and he’d yell in an exaggerated voice, “WHERE’S MY PRESENT? DID YOU BRING ME A DONUT?”

He was racked with pain and depression most of the time towards the end, and it was always nice to see him happy and fired up.

Now as far as that present, I think he knew more often than not what I’d be giving him, but I don’t think he allowed himself to expect it. To add the gravitas of it all, I often brought it over unwrapped in it’s natural state.

The boisterousness would instantly turn to whisper, and his Marine Corps-bred instincts would kick in.

“Don’t tell your mother,” he’d much too loudly whisper, brown bottle in hand. As he’d begin to think of a good hiding spot, it would dawn on him.

“Why didn’t you get me the bigger bottle?,” he’d demand, back in that same tone as Where’s my present but at a hushed volume.

It was an ongoing discussion between Dad and me. He’d rather have a $7 two gallon jug of whiskey from the paint thinner aisle of the liquor store, but I’d always buy him one of those smaller, flat-plastic-flask-shaped bottles, like you find laying around the park on a Saturday or Sunday morning. The kind of bottles they keep behind the counter. The kind of bottles Kesslers or Old Grandad don’t usually come in.

Dad wanted more, and wanted it to be cheaper for me. I wanted to give my ol’man a taste, but not too much. He was a diabetic, was on about a million pills. The booze messed with his blood sugar and some of those pills. He didn’t care. He liked a little whiskey in his iced tea or diet ginger ale or diet lemon-lime.

The bottle also had to be plastic, because the diabetic neuropathy dad had in his hands was so bad, he could barely feel them. His hands didn’t work too well.

So it was a small plastic bottle, and I was happy to be the ol’man’s hook up. Of course you hope he’ll live forever, but if you told my dad that by giving up booze he’d live another six months, he would have comically shoved a glass in your face and told you to Fill’er up.

He smoked on and off from the time he was in grade school, and ate more donuts than any other diabetic heart patient in the history of man. Those were his choices. And though they made me sad, and I’d encourage otherwise constantly, I couldn’t make the decision for him. Same with the booze. The only thing stopping him from having a drink was his inability to get to the liquor store.

Now he wasn’t an alcoholic or anything, but he liked a drink. And didn’t care what it did to him. His rough physical state of well being was actually better than his sorry emotional state, so making him happy was important to me. And I’m pretty sure getting that bottle as a gift made him happier than the actual drinking did.

Also, inevitably would come the reminder that we had to be nice to him because it was his birthday, and because he was moving soon, and not going to tell us where he was moving to.

“Some honey just told your ol’man he looks like he’s about 28,” he’d say, just like he had at probably every birthday since he was 29.

Dad died way too young, but I’m glad not before at could laugh at his stupid jokes and the dumb things he’d say over and over again. I see a few people I’m close to finally appreciating their parents as people for the first time, and enjoying them with all their faults. It’s tough with parents, because it’s literally a lifetime’s worth of baggage we carry in dealing with them.

For dad’s birthday, please do him the honor of trying to accept some of the stupid stuff your mom or dad might do. And please give them a hug and tell them you love ’em.

I did that all the time with dad, and it still doesn’t feel like it was enough. 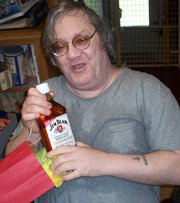