In the late 80s, Buffalo night owls had John Otto on WGR, Larry King on WBEN, and Bruce Williams nationally syndicated TalkNet show on KB. I really loved all three, and would spend nights tuning back and forth on my little plastic Realistic AM radio under my pillow.

Afraid of repercussions from my mother’s quite amazing sense of hearing, the volume was so low I missed at least half of what was said. But being 9 or 10, listening to these bigger than life talents, I knew this was something I had inside of me to do.

I’m in awe that I had the chance to live the dreams that grew bigger and brighter from that little pink 9-volt radio whispering away in the wood-paneled 1980s bedroom I shared with my little brother.

Long before he became little more than a pair-of-suspenders caricature of himself on his CNN interview show, Larry King hosted one of my all-time favorite radio shows, late nights on the Mutual Broadcasting System.

More than ever came across on TV, on the radio, he was kind of a punk, kind of a blowhard. He’d take on heckling and prank phone callers– and really lose half the time. Would audibly smoke cigarettes on the air, and brag endlessly about hanging out at Washington’s trendy institution restaurant Duke Zeibert’s. Occasionally, he’d fall asleep on the air.

It was always an adventure to listen, mostly because when he’d put in the effort, man, was he talented. A great storyteller. Sometimes with Jean Shepherd (of A Christmas Story) level brilliance.

While completely fabricated, this story about Larry and his friend heading out for “Carvels” brings you to the street corner he’s talking about, and leaves you with such vivid images of the places and people, it’s just masterful.

Being honest, most of the time, that high level of talent was nowhere to be found– but even then, the show was highly entertaining.

Like the time a college student was asking Larry for advice on a career in journalism, and the clearly half-asleep Larry goes off in legendary fashion.

I called Larry’s radio show a handful of times. Once, I was 14 years old and called to challenge an author who was denigrating American youth and their lack of passion for geography. Larry interrupted me and started telling me I was wrong, but then the author interrupted Larry to agree with me. It was a proud moment.

Two other times I remember were more on the heckling/prank side.

Once, I used a stupid voice and a made up town in New Hampshire as my name (Mt. Coakerknock, NH, Hello!) to ask Larry what his favorite doughnut was. “Fascinating question, sir,” he said with mock appreciation. I forget what his answer was, but his did say he didn’t like powder doughnuts, because “I don’t like anything messy on my face.”

Larry famously had a heart attack in 1987, and the commercial breaks on his shows were filled with his endorsements of various products like herbal supplements which he would claim were helping to keep him healthy after having a heart attack. “Friends, it’s Larry King. Since my heart attack, I’ve been using Garlique brand garlic supplement, and  let me tell you, I’ve never felt better.”

After Larry quit the late night radio show, WBEN carried a midday show he hosted for a few months, but it didn’t last long. I called that show and asked him if he had another heart attack when he found out he was no longer on WBEN in Buffalo.

ut that was my way, I guess, to be a part of a medium and a show I loved.

Maybe one of these days, I’ll dust off those old cassette tapes and post them here. 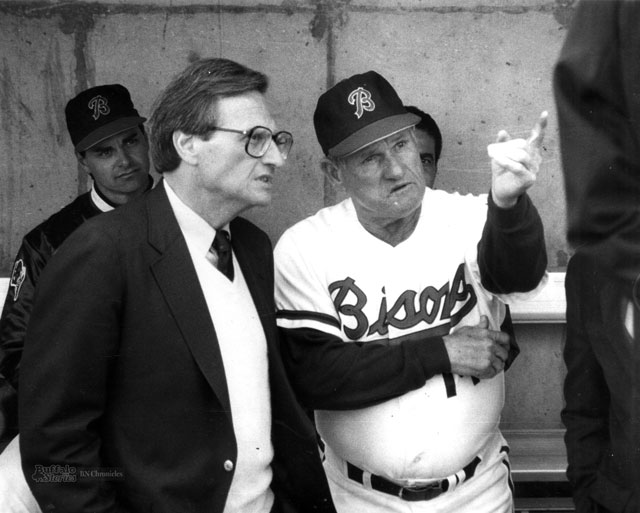