The word unbelievable is thrown around — but the lineup at the 1960 Buffalo Jazz Festival at Offerman Stadium was pretty close to unbelievable.

The run up to the event received plenty of coverage in the Buffalo Courier-Express, The Buffalo Evening News, and The Niagara Gazette.

Co-produced by Ed Sarkesian and George Wein, in association with WEBR disc jockey Joe Rico, the festival features a lineup of entertainers that reads like a “Who’s Who in Jazz.”

The idea for staging a Buffalo Jazz Festival represents the collective thinking of professional producers and interested local businessmen. Producers Sarkesian and Wein regard Buffalo as one of the top five jazz markets in the country, based on the  record of successful shows staged at Kleinhans Music Hall and local theaters.

The Niagara Gazette reported that a ‘”Living Stereo” sound system was to be installed in Offermann Stadium at a cost of $6000, “assuring that the audience will hear every chord struck by the Dave Brubeck Quartet, every run from Louis Armstrong’s golden trumpet and every note played and sung by Dinah Washington, the Duke Ellington Orchestra, Gene Krupa, Count Basie, Dizzy Gillespie and the other stars who will appear.”

As far as the show itself:

Gill also reviewed the last day of the show for the Courier.

The second part of Buffalo’s first Jazz Festival concluded last night at Offermann Stadium where again some of the top names in music produced an evening of fine entertainment for an enthusiastic audience.

The total attendance for the Saturday and Sunday night shows was 16,000.

On stage last night was an array of celebrities equal to the standards of the opening edition. Such personalities as Chico Hamilton, Duke Ellington, Gene Krupa, Oscar Peterson and Louis Armstrong were on hand. It also marked the first Buffalo appearance of Jackie Cain, Roy Kral, and Cannonball Adderley.

Hamilton’s Quintet, which is built around his fine drum work; Ellington’s orchestra in the blue mood of the old master, Krupa’s torrid drums, and Peterson’s great piano playing highlighted the festivities.

Armstrong’s appearence brought the usual reception for the great “Satchmo,” whose trumpet and gravel voice are a must for any succesful jazz gathering.

Cannonball Is a Hit

Cannonball Adderley and his alto sax, backed up by his side men, brought about interesting improvisations on the jazz standards. The integration of vocal sounds with those of the instrumental, placed Jackie Cain and Roy Kral well up in their
chosen classification.

Local talent again received its opportunity. Patti Leeds, accompanied by the Sammy Noto Quintet, was as vocally pleasing as she was visually appealing.

She turned easily from sultry ballad to belting chorus, with all the accomplishments and polish of a top professional. All indications are that her future it very bright. (WEBR disc jockey) Carroll Hardy provided the program introductions.

Among the odd stories from weekend festival– it was the first major event where The Buffalo Police Department’s new K-9 squad was given a public appearance.

Working out of the Franklin Street station, “The dog, his handler and the van patrolman-driver form a team which check trouble spots anywhere in the city,” reported the Courier in a follow-up article. “No job is too small — roaming through pool parlors, mingling at crime scenes, even issuing traffic tags.

“Their finest hour was handling the crowd at the recent Jazz Festival in Offermann Stadium. Not one disturbance took place during the concert or on any streets afterwards. The promoter told Lt. Carr it was the only peaceful concert on his tour.”

As he campaigned against President William McKinley, Congressman (and later Secretary of State) William Jennings Bryan filled the streets of Buffalo’s East Side as thousands jammed into the Broadway Market and surrounding streets to hear Jennings speak.

“On the East Side it seemed as if the whole populace had turned out to shout and cheer for Mr. Bryan,” wrote the Courier. It was estimated that 25,000 heard him at the Broadway Market, and another 8,000 heard an address at a convention hall. Another 40,000 lined the route between the two places.

Kansas’ governor came to Buffalo in his bid to unseat Franklin D. Roosevelt after Roosevelt’s first term in office.

After parading through the streets, Landon stopped at the Statler Hotel for a tea put on by Buffalo’s Republican women. That night, Landon held a rally under the lights at Offermann Stadium, which was the home of the Bisons from 1924 to 1960.
—–
1952: Adlai Stevenson II

Stevenson was the man who took on Gen. Dwight Eisenhower for the Oval Office being vacated by Harry Truman in 1952. He then ran against the incumbent President Eisenhower in 1956.

Named after his grandfather — who was vice president during Grover Cleveland’s second term — Stevenson was governor of Illinois and was later named ambassador to the United Nations by President Kennedy.

The Arizona senator joined his running mate, William E. Miller, in the congressman’s hometown of Lockport for a September 1964 campaign stop.

It was declared “Bill Miller Day” in Lockport in honor of the candidate for the vice presidency.  The crowds were compared favorably to four years earlier, when John F. Kennedy — then a senator and candidate for president — barnstormed through Niagara County, including a speech in Lockport.

One difference — despite the crowd’s being made up of people who knew, loved and were proud of their neighbor and his accomplishments — as many as 100 Niagara County sheriff’s deputies were there to keep order and protect the candidates. The stop was only 10 months removed from the assassination of President Kennedy.

Vice President Humphrey picked up the mantel of the Democratic Party following President Johnson’s announcement that he wouldn’t run for re-election, and then the assassination of Robert F. Kennedy. 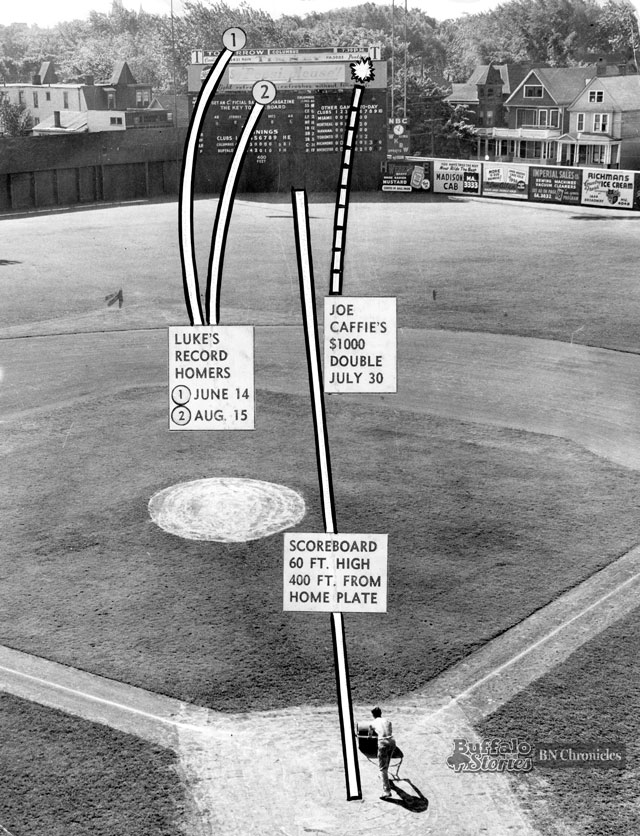 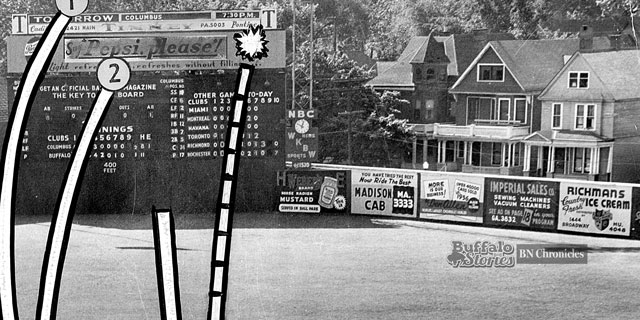 From 1889 to 1960, the International League Buffalo Bisons played at East Ferry, Masten and Michigan.

For the first 35 years, Buffalo Baseball Park was barely more than glorified wooden bleachers. But under the direction of team owner and Erie County Sheriff Frank Offermann, Bison Stadium opened in 1924. The park was renamed in Offermann’s memory when he died unexpectedly at the age of 59.

The city owned Offermann Stadium, and in 1960, the land was reclaimed to build Woodlawn Junior High, which today is Buffalo Academy of Visual and Performing Arts.

As a city-owned facility, Offermann Stadium and its predecessors were open to far more than just baseball. This 1920s photo shows a lacrosse game, and outfield ads for, among other items, Buffalo-brewed Phoenix Beer. 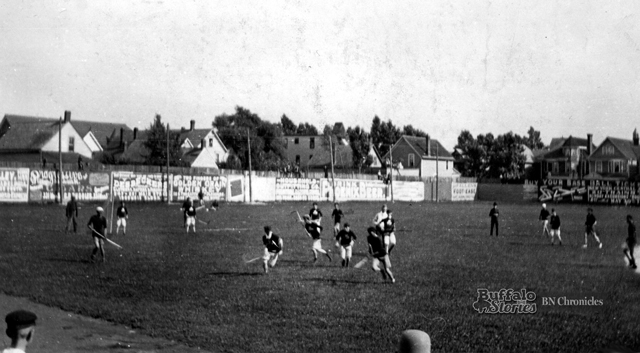 The extreme right side shows some players standing behind the play, an outfield ad for baseball tickets, and several homes — including one with a distinctive turret.

While sports fans no longer look at the house, it doesn’t look much different 90 years later for students staring out one of the Woodlawn Avenue windows at Performing Arts. 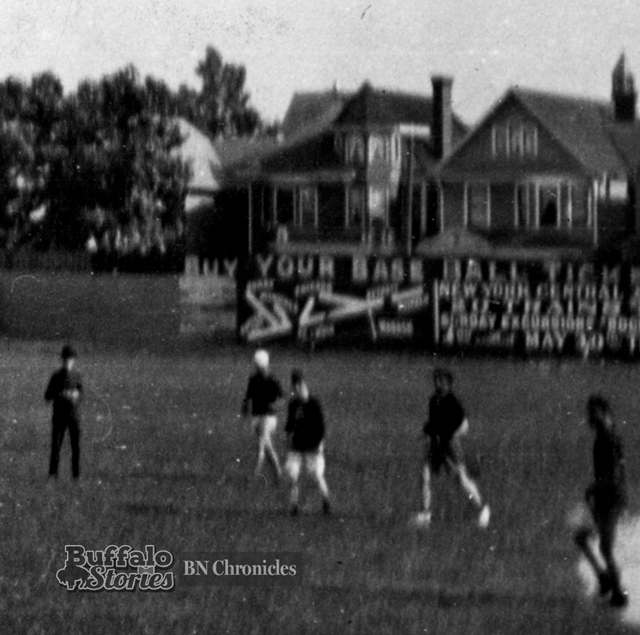