Here’s an august Buffalo structure, a fine example of a turn of the century single family dwelling.

Nestled in a “Parkside” streetscape and neighborhood designed by Frederick Law Olmsted, the American Four Square was designed by renowned Buffalo architect E.B. Green and built in 1909 and 1910.

And sometimes, even a house like this, is just a house unless someone comes along to tell its story.

My then girlfriend and I stumbled into this house’s story when we were house hunting in Kenmore. If you can remember all the way back to 1999, there was mostly the Home Finder and the weekend drive to find a house. We’d spent the better part of a few months worth of weekends cruising the streets of the Village of Kenmore; with it’s character-rich homes, friendly tree-lined neighborhoods, and relatively affordable prices.

But we were at wits end. We were willing to do some work on a house, mostly because we couldn’t afford one move in ready in the places we wanted to live. Until one day when we were stopped at the light right before the 33.

We’d traveled through the Parkside neighborhood dozens of times on our trips between Monica’s parents house and the village of Kenmore, but this time, a great old house– like the ones we’d been looking at, caught my eye.

We’d become accustomed to what to look for: Exterior nice, but not too nice, you pay for that. This house had it. And we found out, at a price that we could afford.

The bones of the house, as they say, were perfect, but there was little else (if anything) that was.

Lots of bleach and elbow work; not a single wall or window that didn’t need attention. No problem, though. My grandfather bought an 1880s house with no heat aside from fireplaces and no electricity in the 1950s. He updated it himself. As my grandma famously said, “They had their bedroom in every room” of their house on Hayden Street in South Buffalo.

Despite a ridiculous amount of work that needed to be done, we bought the joint for a song, and I figured, with my 22 year old wisdom, that if I spent all my free time working on the house, we’d have a completed “This Old House” looking home 6 months later. 12 years later, we’re just getting to the upstairs.

The house was built for Laura C. Geib, who had inherited the land. Her sister had already built a house just across the way and Miss Geib, who was a German and Latin teacher at Fosdick-Masten High School, watched her home, one of the first on the block, be built.

In 1909, being a school teacher was not among the better paid professions. In fact, a teacher’s salary barely allowed one to rise to the burgeoning middle class. You can see Geib’s lack of funds in the very sparce decoration. The house is probably the least of any home designed by E.B. Green, and the original elements that remain, like leaded glass windows, the dining room chandelier and sconces and some door hardware, all give the mismatched feel of a Home Depot bargain bin. Our own lack of finances during the remodel continued this tradition.

It may have been finances, or just not wanting to live alone in such a big house. Either way, in 1914, Geib sold the home to Fred and Lucy Walter, who lived there for the next 46 years.

The didn’t have any children, but Uncle Fred and Aunt Lucy were remembered as a “wonderful, cute little old couple” by a niece I was able to track down.

They also had some strange habits. One time working in the attic, I found about a decades’ worth of tax returns and Sisters hospital bills jammed into the wall cavity. The fact that our deed lists “Lucy Walter, invalid” as the seller of the home in 1960, leads one to believe that she may have been suffering from some form of dementia.

The O’Day family bought the home in 1966, and spent the next 34 years raising a huge brood of kids, and always throwing open the doors to cousins or friends who needed a place to stay. The house wasn’t a museum piece or cold “don’t touch sort of place during those years, it was full of life and well lived-in. Mr. O’Day seemed to be a nice enough guy when we bought the house, but I’d be lying it I didn’t admit to cursing at him as I toiled in breathing life back into the house.

Wanting to know more about the house that once stood on the empty lot next door was really the beginning of my exploration of the neighborhood’s history that culminated with the publication of my 2009 book “The Complete History of Parkside, ” which was mostly written at the dining room table in this house.

The dining room was our first living room, while the living room acted as a workshop staging area.

The photos show the walls having been de-wallpapered and re-plastered, the 4 layers of paint stripped from the wainscotting before 7 or 8 layers of finish were applied. The ceiling, so cracked and marred, that we turned to a trick my uncle told me about: We wallpapered the ceiling using embossed wallpaper. It really gives the look of an old fashioned embossed tin ceiling, but it does come at a price. Wallpapering that ceiling is as close as Monica and I have ever come to divorce over the course of our 11 year marriage.

You really get to know a building when you are essentially rebuilding it from within, piece by piece. We’ve never been really sure of what we’re doing, but always have had an eye towards what a house like this “should” look like, whatever that means.

Our kitchen remodel started with a really leaky faucet which was so badly damaged that it couldn’t be fixed. But I couldn’t put a new faucet in such a grungy sink… Nor a new sink in such a low-grade cabinet. My poor wife came home to her kitchen torn down to the studs, and about 6 months of doing dishes in the bathtub.

But luckily, those studs, the bones, are good. That’s amazing, given the number of beer bottles we’ve found jammed in walls and in crawl spaces before the were sealed up. It’s like a tour of the breweries in business in Buffalo around 1910. The craftsmen who built the house may have had a beer buzz for some part of it, but there is also proof of the workers pride in what they were doing.

Throughout the house, the blue-crayon signatures of workmen adorn the backs of wood work.

In the years that I’ve been working in the house, I’ve kept up that tradition with untold numbers of Sharpie signatures and dates, so some future caretaker can know by name who to curse at as he takes down a gerry-rigged something or other.

The last room of the downstairs portion of the house we completed just this past spring, working up to the moment our house was featured on the Parkside Tour of Homes.

One of the first things I did when we got the keys on Valentines Day 2000 was take all the doors down, and strip the paint off the cabinets in the original butlers pantry. Those doors sat in the basement for the next 11 years, again having just gone up this spring.

During our first spring clean up outside, we found a McDonald’s coffee cup that dated back to the 80s. It had been in the yard at least a decade, mixed in with the composted leaves and broken beer bottle bits. 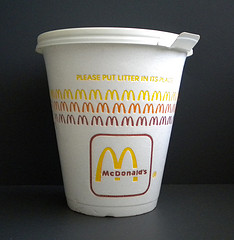 We were slowly able to plant a few $5 plants, add a little each year, and watch it all grow. We were finally able to put a deck on this past spring, and now really enjoy another part of our home.

It’s a continuing story. It’s one we’re happy to be a part of.