I posted this in a few of the pop machine forums on Facebook. It’d be great to get it out of the garage and keeping drinks cool…

I was nine years old when my ol’man drove me to a barn an hour away to buy this 1964 Lacrosse Pepsi machine, as seen in a classified newspaper ad, for $25.

It has no vending or refrigeration guts, and hasn’t since I bought it in 1987.

To collectors, I know it’s a worthless boat anchor— but you didn’t load it into the back of a 1985 Dodge Caravan with your dad and have it in your bedroom growing up.

It’s been relegated to the garage since I bought my own home 20 years ago, but I’d like to shine it up and get it cooling to keep beverages in my basement.

I’ve read the Lacrosse systems are difficult to find. I’m not looking to create a showpiece here, and willing to try any harebrained scheme to be able to keep some pop bottles cold in this sucker.

It’s obviously less about having a soda machine and more about putting this one to use, finally, after more than 30 years.

Any ideas to rig up something would be appreciated. 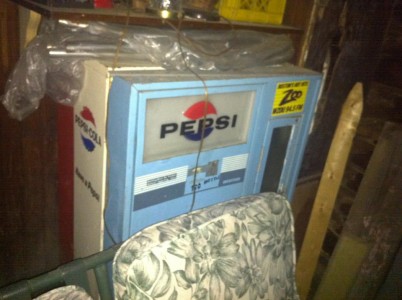