“Wanna feel old? My bar-mitzvah was 30 years ago today.”

My oldest friend JJ sent me this text tonight.

We’ve been brothers, more or less, since third grade.

As brothers, he shared his special night with me. This Catholic kid even helped him practice the prayer he had to read in Hebrew at the big event.

Prayers aside, I was excited because since this was the ceremony where a Jewish boy becomes a man— that night, in this spectacular ballroom with a giant crystal chandelier, we were going to be able to drink rum and Cokes.

With bartenders holding back giggles, we hammered down “drinks” one after another,  as the mixologist made splashing as little rum as possible look as dramatic as possible to a pair of 13 year old eyes.

Our friendship has endured mostly because we were a couple of old souls, a fourth-grade Statler and Waldorf. Our mutual weirdness and sense of humor was forged together.

In our case, very specifically, even early in grammar school, it meant we both loved the boom of 40s, 50s, and 60s nostalgia which seemed to be everywhere in the 80s.

We just about wore out a VHS tape of A Christmas Story, which we watched some part of almost every day, while eating peanut butter Kudos bars and drinking Coca-Cola Classic (none of that New Coke crap for us) out of ceramic mugs with radio station call letters on them.

The Wonder Years was another seminal element for us in understanding our friendship, but by the time the show had debuted, our families lived a couple hundred miles apart. Still, together we watched and loved the show— talking about it briefly over long distance phone calls. 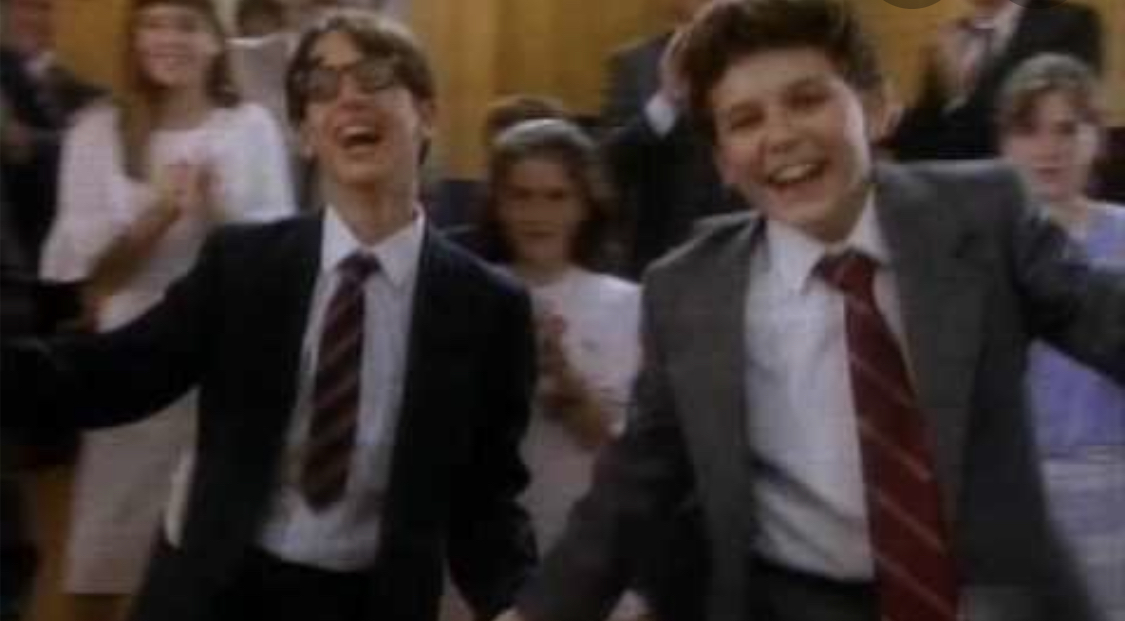 In different ways we were each equal parts Kevin and Paul. While living in the lousy 80s didn’t seem to capture our imaginations like the 60s might have, I think we both knew we were living out The Wonder Years in so many ways— even if we couldn’t fully understand what that meant.

All that seemed to be cemented when only weeks before JJ’s Bar Mitzvah, Paul had a Bar Mitzvah on The Wonder Years.

I don’t think there are any photos of JJ and I together at his Bar Mitzvah that night, but the screen-grab of Paul and Kevin is just as much us as an actual photo would be.

A few years later, JJ and I took a teenaged road trip tour of the Adirondacks, Quebec, and New England.

Of the dozens of great memories of that trip, one stands out tonight— visiting and spending the night at JJ’s grandparents near Lake Winnipesaukee, NH.

A night of free lodging was great for a couple of 16 year-olds on the road for a week, but it came with some weirdness.

Such characters were JJ’s grandparents, they could have walked out of a sitcom.  Well, except that his grandmother was wound half-a-turn too tight to get laughs.

Every word she spoke was saturated with anxiety and disappointment, whether it was the excessive use of ranch salad dressing or the accommodations in the guest bedroom.

“Oh Irv,” she said in her breathy and unmistakable voice, “it’s too bad we still don’t have those long beds that we had for (JJ’s dad) for these tall boys. They were beautiful beds.”

Sitting in his barcalounger, barely looking up from the TV stocks crawl on Financial News Network, JJ’s grandfather said with a smile and a solid New England accent, “Maaahgo, that was FAAHTY YEAAAHS AGO!”

“Forty years ago” seemed like an impossible concept that night almost 30 years ago, when we piled into Irv and Margo’s white Lincoln Town Car for an early bird dinner at Hart’s Turkey Farm.

But it all happened in a blink.

At the time, I thought that Grandpa Irv was smiling because his batty wife was almost making a scene over pining and longing for furniture that had been thrown away four decades earlier.

But now I know, some part of that smile had to be just how fast those “faahty yeaahs” had gone.