While the whole world hears Buffalo and thinks of chicken wings, the much older and somehow more dignified beef on weck has been holding its own in our hearts and our palates in the shadow of hot sauce and blue cheese for decades.

Aside from both being Buffalo dishes, people from outside Western New York often don’t get it quite right when referring to chicken wings or beef on weck.

Just as Buffalonians smile when NFL broadcast cutaways feature video of wings being tossed or a beefy kimmelweck roll being served across a bar, we all grimace together when someone talks about “fried Buffalo hot wings” or about serving them with ranch dressing. It’s even worse treatment for beef on weck.

Bills fans still remember the time during a Bills/Cowboys game in 1996 when John Madden called our sandwich a “beef on wickie.”

Just this past year, while gnawing on a beef on weck handed to him by celebrity Chef Mario Batali, “Tonight Show” host Jimmy Fallon said, “That might be the tastiest thing I ever had in my entire life.” All great, except the pair referred to the sandwich as “a beef on a weck.”

There’s another commonality between our wings and our roast beef. The Buffalo institutions that are credited with inventing them many have have really have been the first, but both are places that moved menu items into iconic status.

Nearly every Buffalonian who cares about such things knows some part of the popular account of the birth of the chicken wing. Anchor Bar owner Teressa Bellissimo whipped up the first batch on a whim to feed her son’s hungry friends late one Friday night in 1964.

The story behind Buffalo’s other signature culinary specialty is far less known and maybe a tad more hazy, mostly because it traces back 63 years earlier to the time of the Pan-American Exposition in 1901. 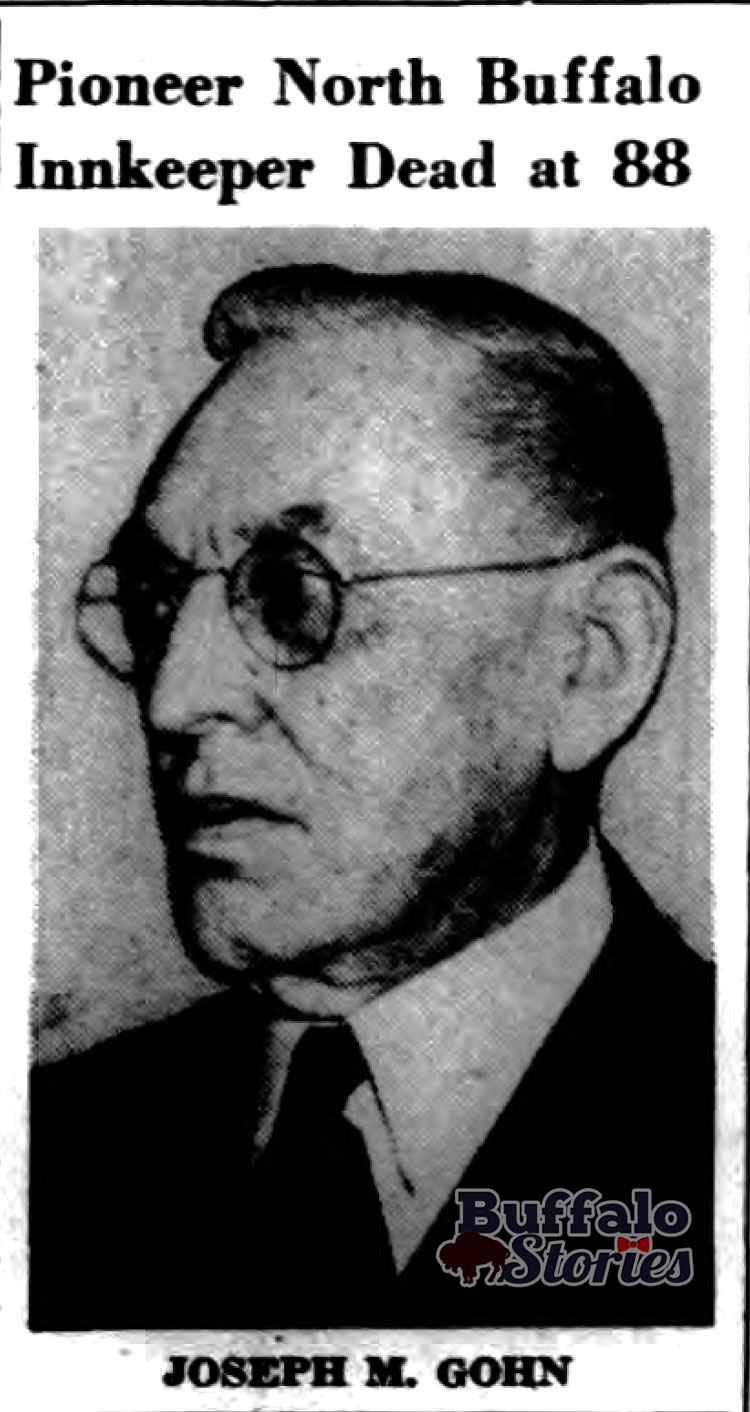 The story of Joe Gohn’s “Delaware House” tavern and his creation of beef on weck is muddled with foggy memory and generations of telling and retelling stories. There’s also the fact that Gohn owned three different taverns along Delaware Avenue – and different folks try to grab a piece of the Gohn story as their own through the years.

Looking back at historical records, we can mostly match the lore with the timeline created from city directories, census forms, property maps and transaction records.

So, despite what you might have read, the following account of Buffalo’s beloved “Beef on Weck” and its creator Joe Gohn takes into account the lore shared in no fewer than two dozen stories written between 1943 and 1980. Most stories written since then are based on the information presented in these earlier accounts.

Through the years, Joseph M. Gohn owned three different taverns on Delaware Avenue. The first, at 2070 Delaware Ave., at Amherst Street, was called the “Delaware House.” It was located on the northwest corner, and in the 1890s, it was a mostly rural and farming area. Most of Gohn’s customers were people traveling back and forth between Buffalo and Tonawanda.

That changed with the coming of the Pan-American Exposition. An 1898 Buffalo Evening News story credits Gohn with “being a sharp enough gentleman” to “sell his place to the Pan-American enterprise for a snug fortune.”

In 1901, the spot where the Delaware House stood at Delaware and Amherst was the site of a gate and one of the grand entrances to the Pan-American Exposition. A gas station was built on the spot in 1931, and today, it’s a used car lot. 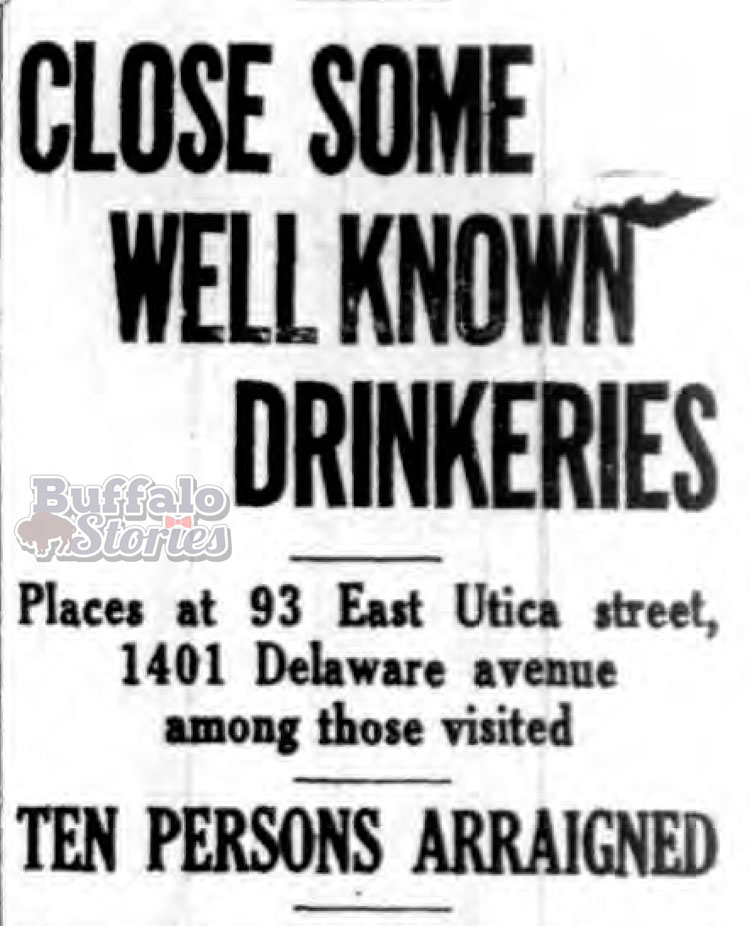 With the original Delaware House leveled to make way for the Pan-Am Expo, Gohn moved his tavern and hotel operation to 1401 Delaware Ave. at West Delavan Street. It would have been from this location just a few streetcar stops south of the Pan-Am that Gohn would have plied hungry tourists with roasted beef on kimmelweck rolls – mostly in an effort to make them thirst for more of the Phoenix Beer his tavern served.

Gohn and his family operated the tavern up to and through the Prohibition years, when the “soft drinkery” was busted at least three times as a speakeasy. During one 1930 bust, Joe’s son Charles was arrested and nine quarts of ale, three pints of ale and three half-barrels of beer were taken out of the place.

Standard Oil bought the corner property where Gohn’s had stood for decades in 1931. Gohn and his son Charles moved their business next door to 1389 Delaware Ave.

By the time the family sold the business in 1943, it was Buffalo legend that “Gohn’s Place” was the tavern from which beef on weck was made famous.

Art Meyer bought the place and operated Meyer’s Tavern in the building which still stands at 1389 Delaware Ave. When Meyer sold in 1969, the place became the Locker Room.

The sites of Gohn’s second and third taverns. The second is currently a closed gas station, at left. The third was recently Blush nightclub, at right.

Both Meyer and Locker Room owner Jim Naples continued the Gohn legacy, claiming their place was the home of beef on weck – which was only true in that the man who invented the beef on weck next door later ran a tavern in that building as well.

Naples liked to play up the history of the taverns he owned, from the Roundtable (which he co-owned with George Steinbrenner) to the Locker Room. A 1969 story around the time of the sale traces back the lineage of many of the tables, light fixtures and bartenders who’d be working at the Locker Room to some of the glorious gin mills and taverns of Buffalo’s past. Many of the tales – like claiming the building was the home of beef on weck – had some faint glimmer of truth, but don’t hold up under scrutiny.

Owner Jim Naples promoted the Locker Room as the home of beef on weck. which is based in some bit of truth, but it doesn’t tell the full story.

Half-truths about Gohn helped kick holes in his story, which had evolved to become more legend than fact.

Before he died, Gohn himself embraced the mantle as the originator of food that had become a staple in most Buffalo barrooms. Around the time of the sale of the family’s last location, Joe Gohn told the Courier-Express that there wasn’t much of a secret to his sandwiches.

“I never had any particular recipe,” said Gohn, “but always made certain it was good, lean beef.”

Charles Gohn’s 1943 obituary said that he “continued the glorification of the roast beef sandwich begun by his father in Pan-American year.” But when the elder Gohn died six years later at 88 years old, there was no mention of the beef on weck sandwich – just that he’d been the owner of several restaurants. It was never made clear whether Gohn’s first beef on weck was served at the corner of Delaware and Amherst before 1901 or the corner of Delaware and Delavan avenues as the Pan-Am started, so either intersection is a likely “birthplace” of a Buffalo staple.

Just like the chicken wing was a staple in many especially African-American places – most notably, John Young’s Wings & Things – before they were available at the Anchor Bar, there were probably stout German bartenders serving something similar to a beef on weck before Joe Gohn came along.

But just like the Anchor Bar turned something common into culinary history, so too did Joe Gohn.

Now, with that cleared up, what about those rolls you ask? A late add to the Gohn story seems to be about a German baker working in the tavern who made the pretzel salt and caraway rolls patterned after ones he remembered from his German youth.

Well, if Joe Gohn deserves possibly dubious accolades as the father of the beef on weck, East Side baker William Wahr probably deserves the same for the kimmelweck roll.

Whether he provided Gohn’s rolls is a mystery, but from the bread bakery he built on Herman Street near Broadway in 1891, Wahr started making and popularizing the salty crusty bread right around the time Gohn started putting tender beef on it.

When he died in 1924, Wahr was remembered as a “well-known baker” who’d come to Buffalo from Germany 40 years earlier, spending all that time baking.