The address is still familiar 78 years later, but there’s not much from this December 1937 view of Lafayette Square that survives. 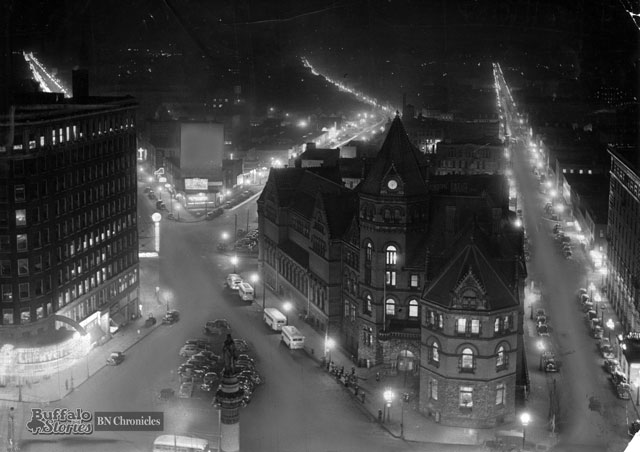 The very top of the Soldiers and Sailors monument in the middle of the square is visible in the lower left corner.  That, and the Hotel Lafayette — the Clinton Street wall of which is visible on the right side of the photo — are the only easily seen remaining structures in this photo.

When the Romanesque-Revival old Central Library was opened in 1887, it was said that “no library in all the land is more nobly housed.”  By the 1950s, however, the old building was seen as leaky, cold and difficult to adapt for new technology.  The current Central Library replaced the 1887 building in 1964.

Most, if not all, the buildings visible behind the library and Hotel Lafayette are gone. Most that survived into the ’60s and ’70s were torn down to make way for the never-built Elm-Oak corridor expressway. By the 1980s, modern bunker-like government buildings were built on the vacant blocks between Oak and Elm. The Lafayette Theatre building was torn down in 1972 to make way for a parking lot. 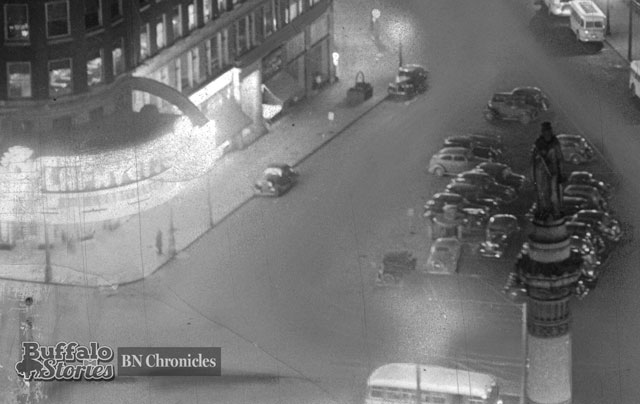 The triangle in the background of the wider view photo, where Broadway and William come to a point, is now occupied by a gas station.