The summer of 1965 brought much excitement for the area we’ve come to know as the Buffalo Niagara Medical Campus. While at least a half-dozen current projects are combining to make the area a bastion of hope for what is to come for our city and our region, then it was only one big project — the expansion of Buffalo General Hospital — that was making people excited. 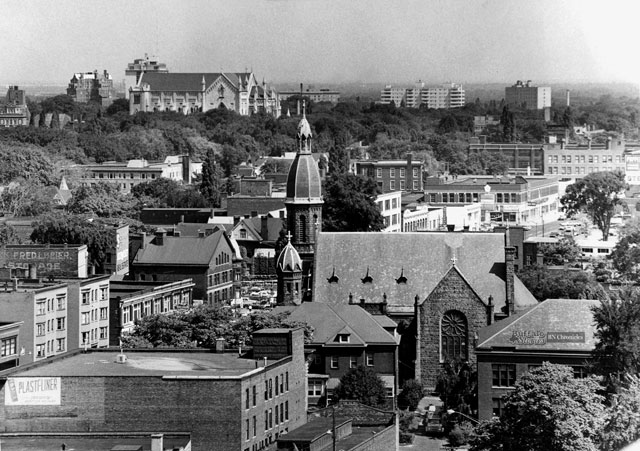 The new high-rise structure was offering new vistas like this one, looking north from near the corner of Main and High.

Two churches jump out of the photo.

In the foreground at Main and Best, the former Our Lady of Lourdes Roman Catholic Church is currently owned by Ellicott Development, and along with recently purchased surrounding property, was slated for some manner of mixed business and residential space.

The larger church in the distance is St. Joseph’s New Cathedral at Delaware and West Utica. From 1912 until 1976, the church was the Cathedral of the Diocese of Buffalo. The poorly designed church deteriorated before the eyes of the diocesan faithful, and Bishop Edward Head ordered it razed in 1976. The Timon Towers apartment complex now fills the site.

The brick building with the Plasti-liner sign in the foreground is now the site of Wendy’s. The roof in the immediate foreground belongs to Frank and Teressa’s Anchor Bar where, about a year before this photo was taken, Teressa Bellissimo fried up what legend has deemed the first Buffalo chicken wing.